There’s been plenty of debate about whether on-or-offline retail offers the ‘best’ way to get your shopping done. But there’s a third option most people don’t think about – shopping online while you’re in stores, to get the best of both worlds. I took the Vodafone Smart Tab 4G to Oxford Street to try it out. 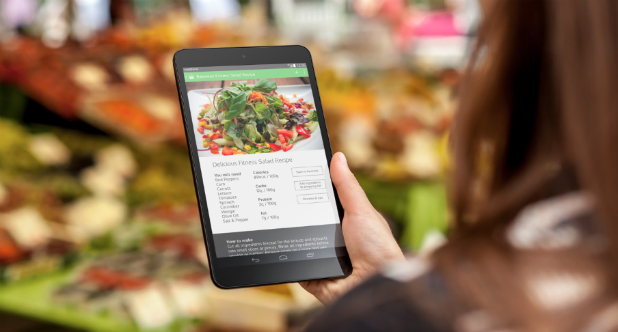 Using Google Keep, I’d been making a note every time I thought of something I needed to buy on my big shopping trip. So I had two ready-made shopping lists on the tablet, and used those to decide where to go first.

Several of the items on the list were accessories for a party dress, which I had plans to wear that coming Friday. I needed tights, a clutch bag and something to cover my shoulders (it’s winter, after all!). Walking into the cavernous flagship Debenhams branch, I thought “wouldn’t it be handy if I could do a quick search of everything in here?” – oh right, I can.

There’s no in-store WiFi, but despite the shop being basically a concrete bunker, Vodafone 4G didn’t falter. I pulled up the Debenhams app in the Android app store, but it wouldn’t play ball: possibly because it’s designed for phones. So I went to the website instead, and searched for ‘shrug’ – the term for a tiny cardigan type thing that warms your shoulders without swamping your dress. An impressive amount of options came up – but how could I locate them on the enormous shop floor? 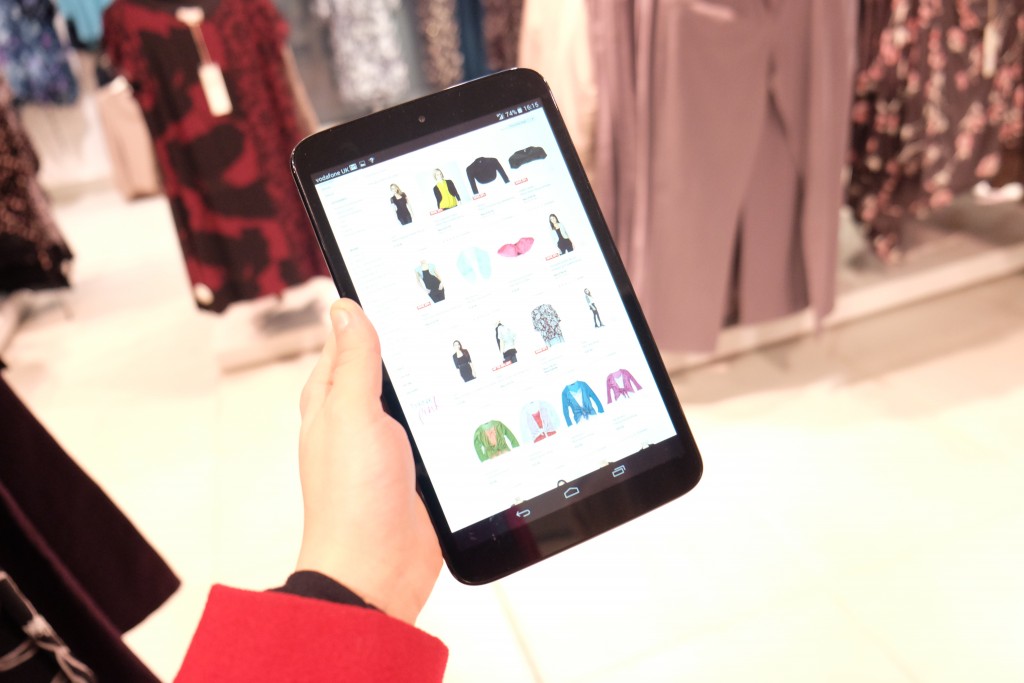 I filtered for price and colour, located something I was interested in and noted the brand. Then I used the store signs to find that brand, and there was my shrug, in stock and in my size. Boom! That’s one thing ticked off already.

While I was wandering about with the store website open, I noticed something we’ve all experienced when shopping online: products can look radically different in real life. Take this dress, for instance – on the website, you can see it’s glittery, but it looks pretty dull. In reality, it has a mesmerising rainbow sparkle that just doesn’t come across in the website photos. I’d never have bought that from seeing it online, but in person? I was tempted. 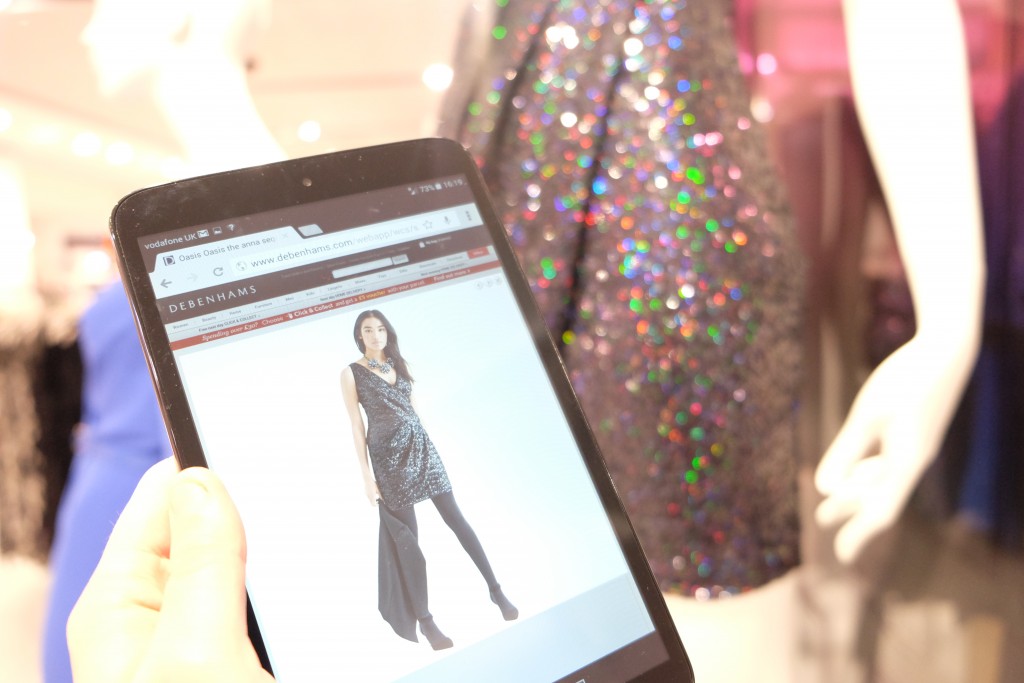 I couldn’t be distracted from my mission, though. Next item on the list was a clutch bag, but having bought a black shrug, I realised I could just use my black sequinned clutch. So I didn’t even need to buy a new one. Two things covered.

Next up: tights. I’d been browsing H&M’s website on the way to Oxford Street, so I’d already seen some I liked. Would they be in stock, though? I made a beeline for the hosiery section and bingo, there they were. This was starting to feel dangerously easy.

I headed to Boots and tried to download their app, but it doesn’t work on tablets. I could have loaded it up on my phone, but decided it’d be quicker just to grab the items on my shopping list. Unfortunately, I’d failed to realise that two family-size bottles of mouthwash would start to feel very weighty, very quickly. This is one of the downsides of shopping offline: you have to carry everything yourself, everywhere you go.

Not to be beaten, I continued my list. Next up: touchscreen gloves. The need for these was getting acute, as it was pretty cold and my hands were turning icy holding all my carrier bags. I settled in a café with a refreshing coffee and Googled ‘touchscreen gloves’. There were far too many options, so I tweeted asking for advice, then cross-checked the suggestions against online reviews.

The clear winner was Muji, which was handily… all the way down the other end of Oxford Street. Argh. I battled my way through the crowds, looking at the colour options on my tablet on the way there, then went straight for them when I reached the shop. They’re really good gloves, which made it worthwhile (thanks, Twitter!).

Next, I headed to Thornton’s to find my sister’s favourite chocolates for her birthday. I checked the website and found a gift set of truffles and prosecco that looked pretty good – but it wasn’t in the shop. That was disappointing, until I realised just about everything in the physical store was on offer, and those offers mostly weren’t on the website. Yay, bargains! I bought an absolute armload of chocolatey goodness. Yes, I spent more than I would have if I’d been shopping online, but I also now have a pile of chocolate. I’m more than OK with that.

All present and correct

I ticked off chocolates for my sister and that was it – my list was complete! Unluckily for me, rush hour had just hit so I couldn’t get anywhere near Oxford Circus station. Plus I had bags full of delicate chocolate confections and they were in major danger of getting crushed. I considered getting a cab, but the traffic was insane and even without that, it would have completely negated all the savings I’d made by not getting delivery.

I bought products from five different shops. If I’d bought the same items online, I’d have had to pay five lots of delivery:

None of the websites had offers on for free delivery that day, unless I’d spent more. So I’d have spent almost £20 to have them brought to my house.

Of course, shopping in person has costs too. There’s transport (although this was free for me because I have a travelcard), buying more than you intended because of all the other stuff you encounter while browsing, and the lunch/coffee/both you inevitably have while wandering around the shops. At one point, I was so tired that I almost succumbed to a very expensive bistro, purely because it was three feet away and my arms hurt. I refrained, though, determined to maintain those delivery savings.

The benefits of combining on and offline

Although I had some teething problems with apps not working as they should, this seemed to be down to the retailers – not all of them have wised up to the possibilities of tablets. All their websites worked perfectly, though, and using online shopping functionality while I was in offline shops really enhanced the experience:

The only downsides were that I still had to carry all my stuff home (although the amount of packaging my online shopping generates is just as bad), and dealing with rush-hour transport was less than fun. But I also got the benefits of seeing, holding and trying everything I was buying – you just can’t replicate that at home.

On the whole, I’m sold. My tablet’s coming with me on every shopping trip from now on. Might start buying mouthwash and other heavy stuff online, though! D’oh.