Shiny’s Holly and Sadie are doing 10 days on Joylent, the EU equivalent of Soylent, which is a powdered complete food for humans. Find out more about the Joylent review project here, and read Holly and Sadie’s write-ups of days 1 to 3 here, days 4 to 6 here, and days 7 to 9 here. Holly’s conclusions are here.

So that’s it – it’s over! For one week, I have had powdered shakes for two out of my three meals a day. Apart from a couple of slip-ups, the routine was easy to get into.

So before my farewell, here are my final thoughts on Joylent… 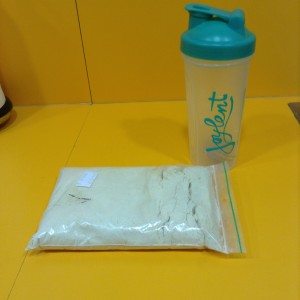 What was I hoping to get out of this trial?

Primarily, I was interested in Joylent’s nutritional effects. I don’t have time to cook much (and am rubbish anyway) so I tend to have quite uninventive meals and am trying to change my eating habits slowly. Although I don’t eat unhealthily, I’m very inconsistent, and I was hoping Joylent could balance me out a bit – both inside and out.

I suppose for this reason, what really excited me about Joylent was the prospect of not having the fuss of making meals – as well as saving money – and still knowing that I was getting every nutrient I needed, which is more than I can say for my eating generally.

I’m a bit of an insomniac and suffer from extreme energy lows after lunch, usually around 3pm till 5pm, and especially if I have had something sweet to eat. This disturbs my productivity at work and leaves me just wanting to lie on the sofa with my eyes closed, so I was hoping that switching to Joylent might help me to feel a bit more awake.

Were there any noticeable effects from using it?

To be honest, it’s difficult to say. Quite early on it became clear that I wouldn’t survive on Joylent alone on a busy work day without feeling half-starved, so I ate a normal, healthy lunch most days. I probably didn’t stay on Joylent long enough to be able to determine the real benefits – there were too many other variables to consider.

However, I will say that when following the routine of a morning shake followed by a healthy lunch at around 1pm, I definitely didn’t experience as bad an energy lag as I used to – some days, I didn’t notice it at all! This is definitely a result, although I can’t say for sure that it was down to Joylent alone.

What’s the best thing about Joylent?

It’s quick and easy to make – no hassle!

The monotony – you could predict it from a mile off, but obviously, my tastebuds got a bit tired of the same old (lack of) flavour. Out of strawberry, vanilla, chocolate and banana, chocolate was the best, hands down. They’re all very mild though.

That said, I do find it slightly reassuring to know that relatively few ingredients go into Joylent – according to their website all flavours consist of a combination of: 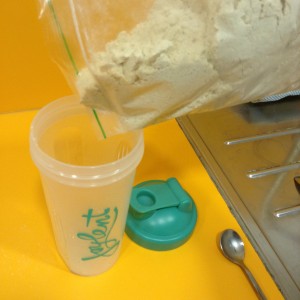 What have I learned from using Joylent?

The main thing I’ve learned is that in order to stick to a diet properly, you have to have a routine. A busy social life, much of which revolves around drinking and eating, is not conducive to sticking to a carefully-devised plan.

This wasn’t a weight-loss diet, but I also began to realise just how hard it is to cut out certain foods, because all it does is make you crave them even more. On the day where I drank only Joylent, all I could think about was food – pasta, toast, bread. I really craved fresh vegetables and fruit as well.

Is this just another dieting fad?

No! When I first told people I was using it, most were sceptical and immediately assumed it was some kind of new super-diet for bored western women.

But although its purpose may not be described as such, I believe it has loads of potential for helping those in parts of the world where people really don’t have a choice about what they eat – for example, during droughts or famines. That’s the really fascinating thing about Joylent, and I really do hope that it will branch out into the social enterprise route.

Will I keep using Joylent?

I’m about to go travelling for several months, so it’s not the best time to incorporate Joylent into my life full-time! However, if I were staying, I’d be very keen to keep having it in the mornings – I roll out of bed fairly late and never make time to eat a proper breakfast, if any at all, so Joylent is the ideal replacement. I just get into the office, make a shake, and sip away at it throughout the morning at my desk. I’ve actually found myself looking forward to the morning shake throughout the trial.

I don’t think I could manage more than one shake a day on a regular basis, though. Realistically, Joylent just doesn’t provide enough ‘stodge’ to get through a typical day without going over the recommended amount. For better or for worse, I base my diet around energy-providing carbs – it’s a diet which was necessary when I did a lot of swimming training as a teenager, and I’ve just stuck to it as I’ve got older. I found that Joylent – with much of the mixture being liquid – didn’t sustain me long enough before I was hungry again. 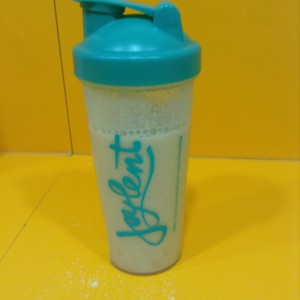