When 23andMe launched in the UK late last year, the response was split between interest and concern. The opportunity to have your genes analysed, your ancestry traced and your health mapped through your DNA seemed irresistibly futuristic to some, and worryingly Orwellian to others. We took the former view, finding the idea of exploring our personal genome both fascinating and just a little bit narcissistic – in a good way.

Shiny Editor Holly did the requisite tube-spitting and shares her results below in our 23andMe review.

The name 23andMe refers to the 23 pairs of chromosomes in every one of your cells. It’s a personal genome service that allows you to take a look at your DNA, helping you to unlock the genes that contributed to your traits (eye colour, height, BMI…), potential health issues (including whether you’re predisposed to Alzheimer’s and Parkinson’s) and where in the world your DNA comes from.

Some people have expressed concern about the fact that 23andMe sell genetic data to pharmaceutical companies, and could potentially also give it to insurance providers, doctors and so on. However, while they do indeed work with pharma companies to help them study diseases using real data, they’re very upfront about it, and only provide anonymous data from people who explicitly agree that they’re OK with it. Including me, since I personally think the only way to effective cures and treatment is through mass data, and I’m more than happy to contribute to that.

First off, you order a DNA collection kit from 23andMe for £125. This comes in the post in a little box, including a plastic tube that you spit into and mix with the stabilising fluid inside. The instructions are very clear and easy to follow, just make sure you haven’t eaten for a while. 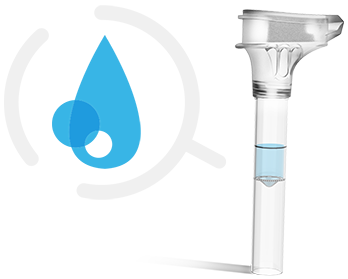 Then, you post your spit kit back in the same box, all prepaid, and await your results. Mine took about 10 days.

What they got right

The main result that I was measuring 23andMe against was Cystic Fibrosis. Last year, I registered as an egg donor, but was rejected because the complex medical screening you go through beforehand identified that I’m a carrier. I don’t have Cystic Fibrosis myself, but could potentially pass it on to a child if the other parent was also a carrier.

This is the letter I got from the hospital after my Cystic Fibrosis result:

And this is what 23andMe said about my Cystic Fibrosis result:

Spot on. Not only did they nail the fact that I’m a carrier, they got the right mutation, too. That settles the accuracy question for me.

On the less serious side, they also got my appearance pretty correct:

My eyes are hazel, but 23andMe lumps that in with ‘brown’, so we’ll count that as correct.

As pigment rings go, those are pretty pronounced, yep!

What they got wrong

Everyone who knows me will tell you I’m a right pansy when it comes to pain. There’s no way I have decreased sensitivity!

The photic sneeze reflex is the thing that makes you sneeze if you look at a bright light. I definitely have it, so while “lower odds” isn’t technically wrong, it’s not right either.

One of the more controversial features of 23andMe – and in fact one that’s banned in the US – is the option to find out how likely or unlikely you are to get certain inherited diseases, like Alzheimer’s and breast cancer. This is controversial because there are many factors that can cause these conditions, and even a positive result isn’t a guarantee that you’ll get it. Because of this, the results for the most sensitive conditions are locked when you first log in – you have to agree to some terms to unlock them. This is one of the most interesting features of the test for me, so I went ahead and unlocked.

To my considerable relief, I found that my results don’t show any predisposition to any major medical conditions, including Alzheimer’s: 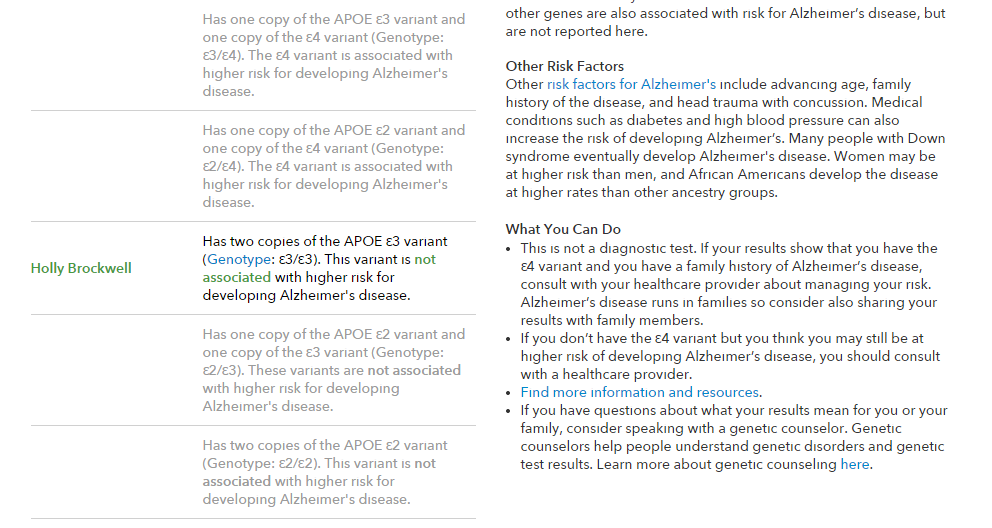 And I have “typical risk” of all the conditions studied, including breast and ovarian cancer, and Parkinson’s Disease:

Again, that doesn’t mean I’m immune to these conditions, just that I’m not genetically predisposed to them.

You can also see your potential responses to a range of medical drugs, but again it was all ‘average’ for me. I did learn, however, that I have a significantly increased risk of a non-fatal heart attack if I drink 2-3 cups of coffee a day. I hate coffee, but I do drink quite a lot of tea and Coke – worrying, but good to know.

It’s also reassuring to see references for the studies 23andMe cites, so you can investigate and evaluate them yourself.

Discover your ancestry, and trace your far-flung cousins

One feature of 23andMe that isn’t banned in the US is the ability to find out where your DNA originates from. It’s not clear how far back this goes, but it’s interesting nonetheless. I was slightly disappointed to find that I’m 100% European, and 39% British. The biggest surprise was probably the 5.8% Ashkenazi Jewish DNA – I’m very tempted to trace my family tree now, to try and find out where that came from. I had no idea I had any Jewish ancestry. 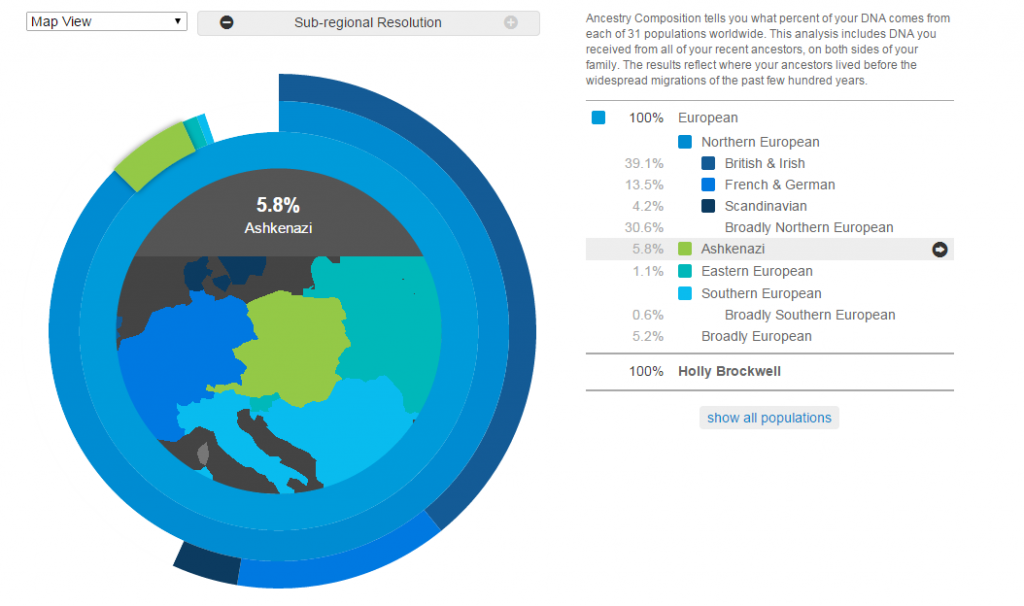 Even more amazingly, you can see a list of all the people who’ve had their DNA tested so far and are related to you. Seriously, there’s a list of people you share DNA with right there – pages and pages long – with full names and contact links in some cases. That’s incredible.

I’ve already been contacted by a fifth cousin in the USA – I had the option to withhold my name and information from him, but I decided to go ahead. I’m all for encouraging serendipity.

One of the most amusing things I learnt from my results is that I’m 2.9% Neanderthal. That’s higher than average (…yay) and basically just means about 3% of my genetic makeup comes from the Neanderthal species of humans that went extinct about 30,000 years ago. But left us their genetic code for massive hooters. Thanks. 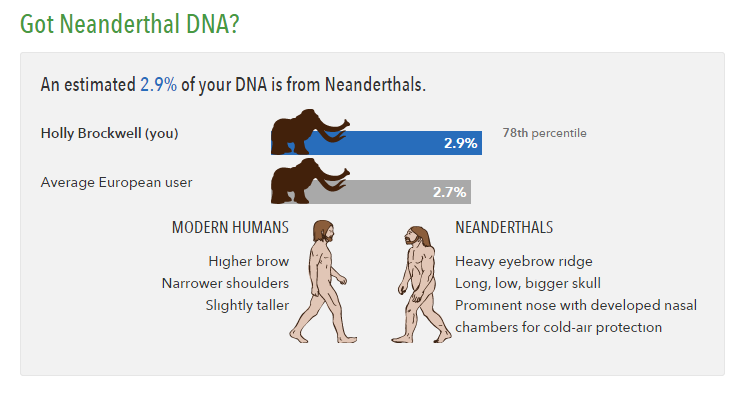 23AndMe’s website also includes a range of less scientific, more silly features, including the opportunity to make a tune out of your DNA. You can choose from a whole range of instruments (my genes sounded best on the guitar) and even download your jaunty genetics to use as a ringtone, or whatever else you might use a short segment of bio-music for (don’t ask me).

(Note: if you use this to reverse-engineer a new me, I want royalties).

Get your own 23AndMe kit

I think 23AndMe is well worth £125. It’s ridiculously interesting (who doesn’t love reading about themselves?) and I learnt quite a bit. It’s not useless data, either – for instance, I now know that I can only blame 5lbs of my current weight on my genes (SNPs are DNA sequences):

But also that I’m more likely to put weight on from a bad diet than other people are: 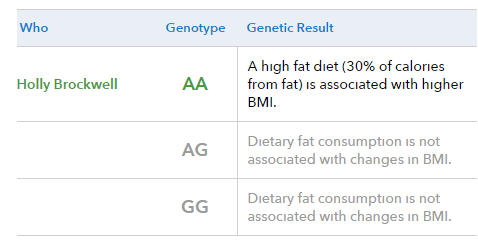 And that I really have absolutely no excuse not to exercise: 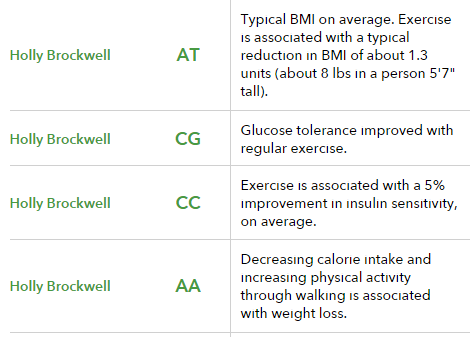 This has spurred me on to be more active, which is a great result. I’m also going to try and trace my family tree to find out where the Ashkenazi DNA comes in, and I’m seriously considering contacting some distant cousins. Why not? They might be cool (NB: probably not if they’re related to me).

It’s interesting to wonder if I’d feel differently, though, if my results had shown that I’m predisposed to cancer or Alzheimer’s. I thought I wanted to know, but would I feel the same if it was a positive result? Ultimately, I wanted to know that I wasn’t susceptible, but there was every chance I could have been. This is something to think hard about before you spring for a test.

If you’re sold, though, you can get your own 23AndMe kit from their website. If you’re anything like me, you’ll be desperate for the results the minute you send the tube off.