‘Twas the night before Christmas and all through the house, every creature was tweeting – via touchscreen or mouse…

Social media has entrenched itself in Christmas as firmly as sprouts or Michael Bublè, but that doesn’t mean it always comes in peace. Here are the most common festive pitfalls to avoid being the knob everyone unfollows this festive season.

What’s that? You’ve put a tree in your living room? And draped it in glittery things? I will NEVER know how you came up with that one, you crazy cat, you.

Obviously a feed full of almost-identical photos of almost-identical Christmas trees is actually one of the things we love about a modern Christmas, so it would be mean to suggest you can’t Instagram your tree. But moderation is important, so try to limit it to three pictures or fewer. Unless your tree is 18ft tall or made entirely from spun sugar or something.

Telling the world that you’ve bought all your presents by the end of November is the Christmas equivalent of ‘amazing session at the gym, and it’s not even 7am!’. You’re helping no one.

“Had a little time left after wrapping everything, so I started on the Christmas shopping for next year. Now relaxing with a well-deserved hot toddy and mince pie :) Successful August.”

Instead, spread a little cheer and goodwill by routinely tweeting frantic updates about how little you have done, bought, wrapped or posted. Be the chaotic benchmark against which everyone else can feel a little better. That is your gift to us all, and it is greater than any bubble bath set.

‘IT IS 4PM ON CHRISTMAS EVE AND ALL I’VE BOUGHT IS SELLOTAPE AND A SANDWICH.’

There’s still something that feels a bit wrong about social media on Christmas Day. A bit soulless and everydayish. After all, how can you be nestled snug in the bosom of your family, soaking up every minute of yuletide joy, if you’re also scrolling idly through Twitter and favouriting ‘reactive’ corporate tweets sent by a glowering community manager in ironic reindeer antlers? It’s like descaling the kettle on Christmas Day, or putting a wash on.

But then there’s the opposite worry – that if you don’t post a ‘Merry Christmas everyone!’ message, you’ll have somehow opted out of merriment. What if people assume you DON’T want them to have a merry Christmas? What if your absence is conspicuous and everyone assumes something terrible has happened? Or nobody notices or cares? By the time you’ve decided where you stand on the issue, everyone else will have polished off the trifle and finished three rounds of charades, so hop to it.

‘Happy Christmas everyone!!!! Love you all!!! Sending love and smiles and gumdrops to all of you today. I’ll be liking every photo that goes up of you in a paper crown, just to underscore this fact.’

There is categorically no way to get engaged on social media without being annoying about it, but that’s fine because you don’t care – you just got engaged! Just remember that while the event is earth-shaking for you, for everyone else it’s probably one of about seven different diamond ring selfies all up in their news feed – so don’t be disappointed if you get a copied-and-pasted congratulations comment rather than a massive bouquet on your doorstep.

NB for the non-engaged: asking “yeah but did he get you an actual Christmas present too?” goes down like a marzipan balloon, so don’t bother. 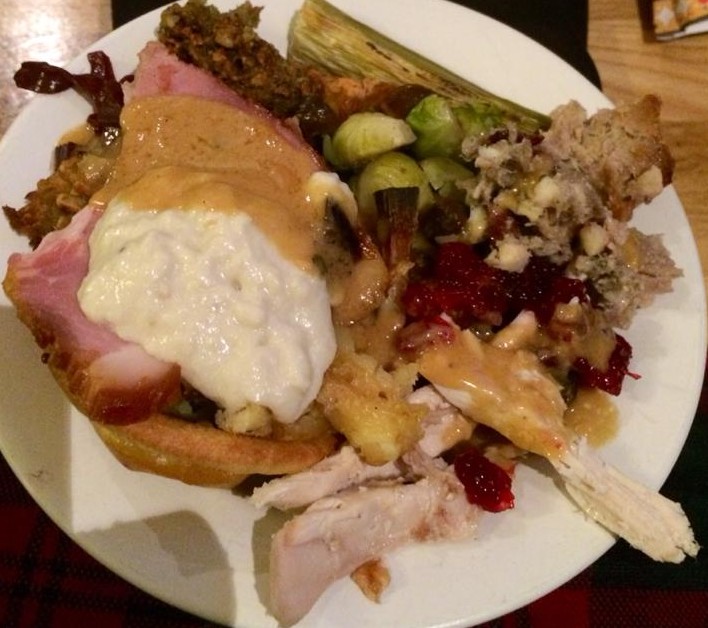 Unless you take your plate into the bathroom for the superior lighting situation, your Christmas dinner Instagram will probably look like a yellowish heap of meat and carbs. A DELICIOUS yellowish heap of meat and carbs, but a heap nonetheless. Go instead for more elegant shots of sprouts, potatoes and trimmings piled high and gently steaming in serving dishes, or try some ‘action shots’ of your Granny’s Elnetted-coiffure getting perilously close to the flambé pudding.

Or just eat the thing.

As a general rule of thumb, the less flashy and more hilarious the gift, the more social screentime it deserves. Meanwhile, photos of your entire present menagerie arranged artfully with all the brand logos showing should be contraband for the over-14s. If you find yourself doing this, give something to the charity shop as penance.

‘Santa brought me a Mulberry handbag, a Bulgari bracelet and a new Lexus, what a lucky duck! :D As well as all this other crap! Have tagged each item with price for your convenience.’

Yes fine, Love Actually is awful and saccharine and basically worse for women than taking away the vote, but it’s sodding Christmas so stop posting links to takedown articles and let us enjoy our problematic films in peace. This also goes for rants about the Christmas number one being mass-produced and commercialised (again, the key word is ‘Christmas’) or for the Miranda special not being high cerebral art. Go and mutter into a pillow.

‘I can’t believe the rest of you are watching this derivative tripe. I haven’t been able to believe it for the past half an hour and I’ll continue not to believe it until the credits roll, just to be sure.’

As a general rule, any Facebook post that begins ‘2014, what a year!’ will be a breeding ground for top-notch festive dickery. What begins as a lovely way to count your blessings and reflect on the 12 months past inevitably becomes a parade of the person’s achievements and distinctions, all of which you’ve definitely spent the last year hearing about anyway. It is the round-robin letter for people under 30. Or for people who can’t be bothered to send round-robin letters but still want to torture you with their success.

‘2014, what a year! I’ve visited 32 countries, been promoted three times, got married twice and still found time to start my own business selling organic nail polish for dogs!’

‘2014, WOW. Incidentally that’s also how many copies my debut EP has sold. Buy it now on iTunes. #blessed’

At the opposite end of the spectrum, there are those who see 31 December as a chance to exorcise some demons, air some dirty laundry and bring the rest of us down just as we’re trying to enjoy the last of the brandy butter in front of the Vicar of Dibley.

While it would be too Scroogelike to ban misery posts completely (after all, nothing is more in tune with the British Christmas than a spot of gloomy wallowing), it is polite to be as explicit about the details as possible. Don’t wave a massive subtweet under our noses and then skip off to sing Auld Lang Syne – lay out all the details so we can plan our ‘U ok hun?’ responses appropriately. And gossip.

‘Well 2014, you could have been better. But if anything, losing two girlfriends, my favourite jumper and most of my hair has made me a stronger person, so thanx to all who supported me through the bad times. You know who you are.

But just to make absolutely clear, I’ve also tagged you all in this status.’