Today, thousands of NHS workers from across six different trade unions are striking in protest at the government’s refusal to give all staff a one per cent pay rise. Messages of solidarity have spread across Twitter, with celebs including Sue Perkins, Rufus Hound and David Schneider all tweeting their support for the strikers.

The ice buckets had barely melted when a new wave of hashtag activism arrived, in the form of UNICEF’s #WakeUpCall campaign in aid of children in Syria. Beginning with celebs but no doubt coming to a newsfeed near you soon, the charity are asking people to post selfies when they’ve just woken up, share it on social media, nominate three friends and donate… you know the drill. So far it’s gifted us a flawless Naomi Campbell, a topless Jeremy Clarkson and a flurry of newspaper columns on why it’s all just a big celebrity ego trip.

Today is also #NoBraDay, apparently part of October’s National Breast Cancer Awareness Month. Clarkson can stay well away from this one, thanks. 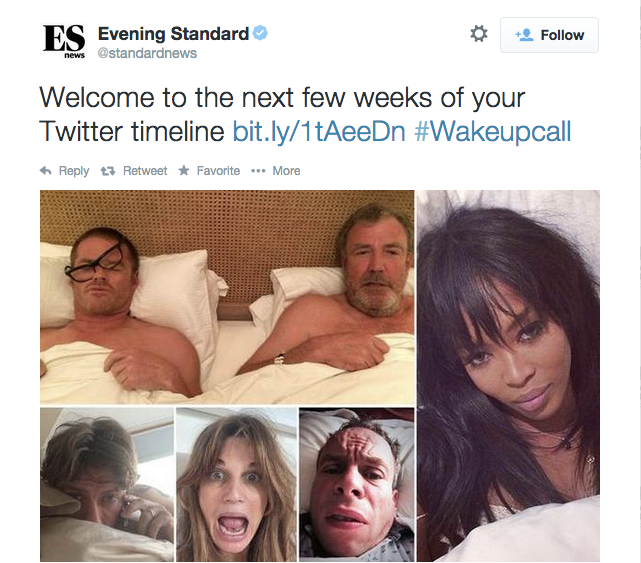 Friday 10 October was World Mental Health Day, sparking debate and campaigns such as the Time to Change pledge aiming to end mental health discrimination in the workplace, which has been sent to all FTSE 100 companies. The #WorldMentalHealthDay hashtag was used across the globe to share tributes and personal experiences of schizophrenia, depression, anxiety and other conditions. The focus this year was on schizophrenia, aiming to reduce the amount of stigma and misunderstanding around the condition – and make everyone who has ever jokingly referred to their tastes, opinions or the weather as ‘schizophrenic’ think twice.

Just under a million tweets were sent about the finale of The Great British Bake Off, which saw lovely Nancy Birtwhistle from Hull claim the victory with her pastry recreation of the Moulin Rouge windmill. Laid-back Nancy was a favourite with Twitter from the beginning, showing off a sense of humour that was always dry, but cakes that never were. Naturally every other brand on the internet tried to cash in on the moment – here are some ‘agile’ responses from Innocent smoothies, Yorkshire Tea and, those well-known cake fans, Surrey Police. 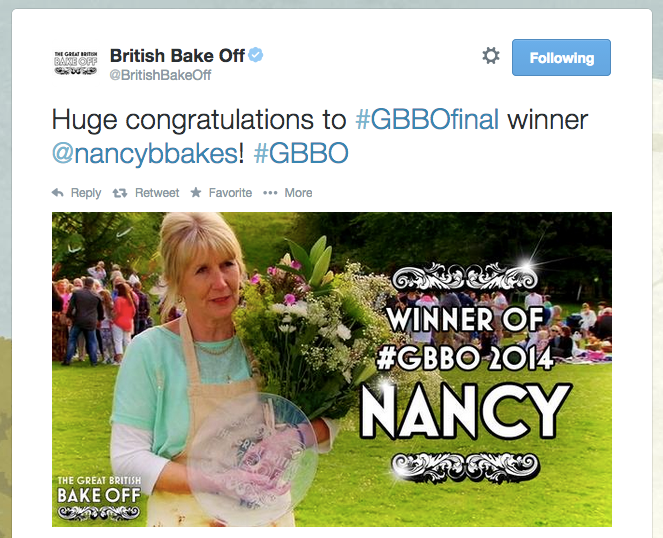 After US law overturned the bans on same-sex marriage in Nevada and West Virginia last week, The Huffington Post instigated a celebration with #OurQueerWedding, encouraging gay couples to show off their wedding snaps. It’s a heartwarming tearjerker of a scroll, particularly for those of us who are still a little misty-eyed over the nuptials of Cam and Mitch from Modern Family.

The internet is in love! Again. This weekend, the object of our (only partially snarky) affection was a video advert made by Thorne Travel, an independent travel agents from the town of Kilwinning, North Ayrshire. A surprising viral hit, not least because most of us had forgotten travel agents were a thing, the all-strutting, all-dancing ad has had nearly 700,000 views since it was unveiled on Tuesday. Highlights include a dramatic film noir plot involving Mickey Mouse, a sea captain less convincing than when Ross in Friends rented that costume, and an inexplicable bride.

It’s failed on one point though: forget the cruises, we all want to go to Kilwinning for our holidays.