The BBC has today launched ‘BBC Genome‘, a comprehensive project aiming to document every single radio and television programme which has ever been broadcast by the corporation.

So if you’ve ever wondered what was on TV or what was on the radio the day of your birth, there’s now a way of finding out. The vast schedule has been put together by extracting listings from digitised versions of the Radio Times magazine from the period 1923-2009, scanning a total of 350,622 pages and 4.42 million programme records from 4,469 editions of Radio Times.

BBC Genome, which was first written about in 2011, will allow the public to comb through millions of programmes and synopses, search for cast details, writers and transmission dates and find out what was broadcast ‘this day in [date].’ For example:

On this day (16/10) in 1958 – the first ever Blue Peter was broadcast. Listed as: “Toys, model railways games, stories, cartoons. A new weekly programme for Younger Viewers with Christopher Trace and Leila Williams.”

While the current version doesn’t include the actual content of each broadcast, this will be incorporated during the next phase of the project. It will also aim to include the different national and regional variants of the magazine, as well as changes to the planned broadcast schedules.

‘To flick through these new digital pages of Radio Times over the last 90 years is to watch a popular history of Britain, television, radio and every family unfold,’ said Ben Preston, current Editor of the Radio Times. ‘Royal weddings, moments of history, stars being born and even shows that everyone has now forgotten – they are all here.’ 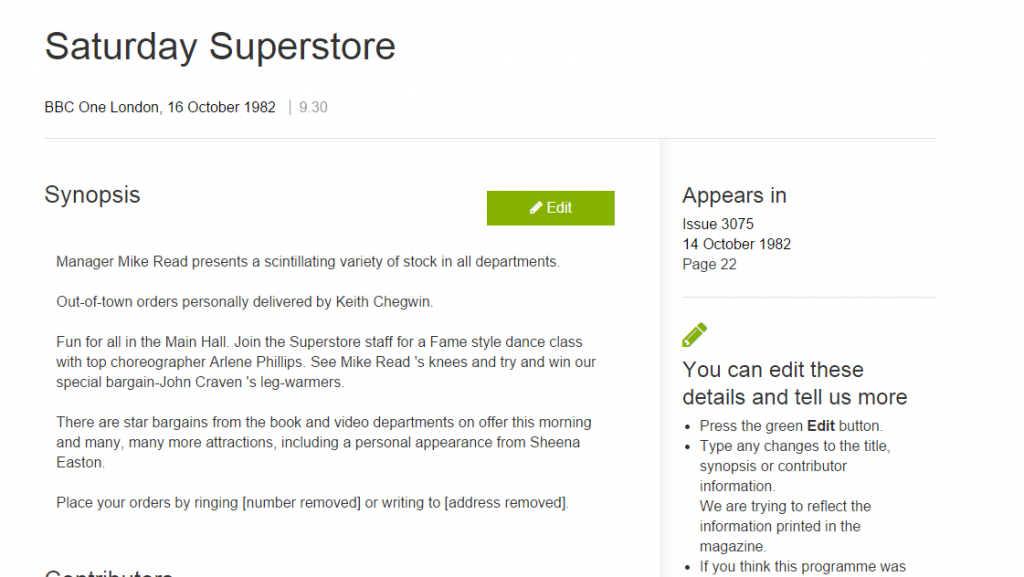 The archives include precise broadcast information for each programme between 1923-2009. [via BBC Genome]

There’s also a ‘tell us more’ option, inviting audiences to submit their own memories, amendments, and suggestions. It’s the first time the BBC is inviting the public to participate in its data on such a scale.

Tony Ageh, the BBC’s Controller of Archive Development, commented: ‘The publication of the BBC Genome marks a significant step forward in helping us to open up more of the BBC’s vast and priceless archives to the public, by creating this record of the history of BBC programming across Radio and TV since 1922.’

From 2007, with the dawn of BBC iPlayer, the BBC also began to archive all its online publications. They can be accessed at www.bbc.co.uk/programmes.