Who made your pants? For most of us, unless we’re label addicts or skilled with a sewing machine, it’s not a question we’re ever able to answer – or even one we’ve ever given much thought to.

At the helm of pioneering online lingerie brand Who Made Your Pants?, Becky John is out to change that. A beautiful collision of human rights, ethical production and more than a few inspirational women, the co-operative employs and trains female refugees to make knickers at its factory in Southampton.

Becky had the idea for Who Made Your Pants? in 2006 while working on a film about sweatshops. Around the same time, she was going through a course of counselling at Rape Crisis. ‘It was the hardest thing I’d ever done in my life,’ she says, ‘but I was so proud of it.’

Wanting to empower other women with that same feeling of achievement and independence, she set up the women-only enterprise, aiming to create an environment that feels as good to work in as its pants (all made from pretty end-of-line fabric and designed to fit the body perfectly) feel good to wear. The staff gather for a shared lunch each day, and all profits are invested in support, advice and education for the Who Made Your Pants? workers. ‘Who could feel lovely in something made in a bad place?’ they ask. Who indeed.

We caught up with the thoroughly inspirational Becky to talk about knickers, entrepreneurship and the women who inspire her…

I really, really like pants. I’ve never been particularly interested in fashion or make-up, but I’ve always loved underwear. It’s about me, not anyone else, not seducing anybody – it’s just about beautiful things. I have this particular set that I really love, and I was looking at it one day thinking, ‘I don’t know where this has been, I don’t know how many hands have held it, and it’s been to countries I’ve not been to’. I wanted to know who made my pants.

If we want to wear underwear with a clear conscience, how much should we be paying for our pants?

It’s difficult to say, because pricing is tied up with so many things. We have a key metric, which is: pants per woman per hour. In big factories they might have an output of 12-15 pants per woman per hour, while we’re aiming that next year ours will be three. It takes us four times as long to make a product, because we allow people time to learn and to train and develop new skills, which impacts on how the price is set.

Ultimately we would love to have a big, really skilled team of people and be able to offer products at a lower price, but at the moment we have to offer them at a price that makes sense for what goes into them.

What we want to do here is have an environment that’s really supportive, really safe and really nourishing for women. We’re empowering women through work. While they’re here they’re learning that they can do something difficult, they can do it well and they can be proud of themselves.

Your factory is a women-only space – what kind of difference does that make?

The women who we work with at the moment are all women who could be described as refugees, from places like Somalia, Sudan and Afghanistan. Currently they are all Muslim, and a lot of them wouldn’t be able to attend and feel comfortable if it was a mixed space. Nobody can take on new stuff if they don’t feel safe, so we have signs on our doors that say ‘our factory is women-only today, please accept our apologies if you need to come back another day’.

And do you find it creates a different atmosphere, only working among women?

I think there are differences, but it’s really hard to pin them down. More importantly, we’re in a different environment – ours is about being supportive, whereas in so many other organisations it’s all about making money.

Who Made Your Pants? is a co-operative, not a company or a charity. Why is that such an important difference?

I wanted everybody who was affected by this business to have a say in how it was run. We shouldn’t have external people coming in and making decisions when they don’t feel the effects of those decisions. This business is about the women, and changing people’s lives through work. I suppose it’s similar to the NHS approach, ‘no decision about me, without me’ – we’re doing it together.

Is that extra level of responsibility a good motivator?

Definitely. It’s about recognising that a lot of the people who society thinks have nothing to give just haven’t had an opportunity. We’ve all got something amazing inside us, we just need a good space to be in to be able to push that through. My team are brilliant women who’ve come through amazing and complicated experiences, and I want them to be proud of what they achieve, and know that this is their business. It’s not someone else’s, it’s theirs.

Do you think it’s important for women to find new ways of working, beyond traditional corporate models?

As more and more women are coming through, we’re able to walk into unchartered territory. I started with the problem: ‘I believe there are women in Southampton who want a job, and I want some pink lace ethical knickers,’ and thought, ‘how can I make that work?’ Instead of starting with an off-the-shelf solution, it’s starting with the problem and finding your own way.

What’s the best advice you can give to somebody wanting to start their own business or social enterprise?

The one thing I would say is: buy a good printer. There are some things that will drive you round the bend, things like a printer crashing on you four or five times in an hour – so buy some good kit when you can, because it helps make everything else work.

How important has social media been to the evolution of Who Made Your Pants?

Enormous, absolutely enormous. On average, over 85 per cent of our sales come via Twitter. And it makes sense because Twitter is essentially word of mouth, and the demographic we’re working for are one of the fastest growing groups on Twitter. It’s where they’re talking to each other about the things they’ve done in their day, the things that have made them happy or angry, and then we’re able to be part of those conversations.

How do you feel that you fit into the e-retail landscape?

Well personally I’ve been shopping online for as long as it’s been possible, because I hate shopping – online has always been the way I wanted to shop, and it’s the way I wanted to sell. But I think what’s really interesting about the e-retail landscape is that a lot of the bricks-and-mortar shops are running to keep up now. The development of great new trading platforms mean that if things don’t work quickly, people just lose interest. It’s got to look good and work the way you want it to, fast, otherwise you just move on. 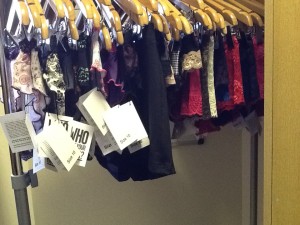 What are your goals for the future of Who Made Your Pants?

At the moment for each new style of pants we make, we teach a new skill. So the short to mid-term plan is to build a really strong team with some really solid skills, so we can start dropping in new styles more easily. I think we’re nearly there. Once we’ve got that, it’s going to be much easier to be really responsive and keep on asking our customers what they actually want. If we can make it, they’ll buy it – why would that not be a good idea?

How much are the women who work with you involved in the creative and design process?

It’s definitely something else I want to develop. We have had lovely moments where the team have put together their own fabrics and shapes to make something brand new, and that’s something we’re going to be working on.

But the reality is that designing underwear is very technical and precise, almost more like engineering than it is like dressmaking, so we’re working with a fantastic young woman called Hannah from the Contour Fashion degree course at Leicester De Montfort who will be our trainer and our designer for the next two years. The team will be learning at the same sort of pace as her, and if they do want to learn more and get more qualifications then we’ll support them.

Do you have any plans to start making bras (please)?

Yes! But it’s a long way off. Technically they’re very complicated, there’s a lot more to bras than to pants, and we’re still only a tiny organisation. To make cups A, B, C, D, DD, E, back sizes 30, 32, 34, 36, 38 etc, you’ve got at least 24 individual variations, and all of a sudden to make a brand new product we’d have a minimum output of something like 1200. Because we buy all our fabric from ends of line, at the moment we will only do runs of 100, 200 pants. So before we could make bras there’d be a lot of thinking to do in terms of checking our sourcing is right and making our market bigger. At the moment we just don’t have enough people who know about us.

Which women inspire you?

On a daily basis, the women I work with, because they are just amazing. They’re all fantastic women who laugh and are happy so much of the time – it makes you realise that here in Britain, there are people who really don’t know they’re born.

I have a big picture of Camila Batmanghelidjh up in my office. I love her because there’s no artifice – she just says ‘these children are starving, we need to do something about it.’ Shami Chakrabarti also inspires me, because I’m a very lairy person and I love her ability to be very calm in the middle of a debate. I would just be screaming ‘but you’re wrong!’.

And then there’s JK Rowling, because of the way that she talks about money and benefits. There are a lot of people on the political left who think that money and business are bad, and I don’t think that that’s true. But I absolutely want to live in a world where there is a compassionate healthcare system, for example, so hearing JK Rowling talk about why she stays living in the UK – stating very openly, ‘yes I could have made a lot more money for myself, but I decided: no’ – I think that’s a beautiful example to set.

To buy your own and find out more about Who Made Your Pants?, visit their site and follow them on Twitter @whomadeyour.