With thanks to Carphone Warehouse for the handset.

One of the higher-end offerings from the unpronounceable Huawei, the Ascend P7, is priced for the mid-range but taking aim at the flagships. With good looks, an unusually strong selfie camera and an excellent screen, it makes a good start. But as we soon found out, it’s a slippery customer…

Out of the box, this is a good-looking handset. It’s a glossy white iPhone-alike with silver detailing, including metal panels on the sides and understated Huawei branding. The rounded bottom edge is a nice touch, as is the pattern on the back panel – a multi-layer effort made up of circles radiating out from the Huawei logo, and a grid of tiny dots. This is so subtle that I had to look under an anglepoise to see it properly, but it looks good nonetheless. 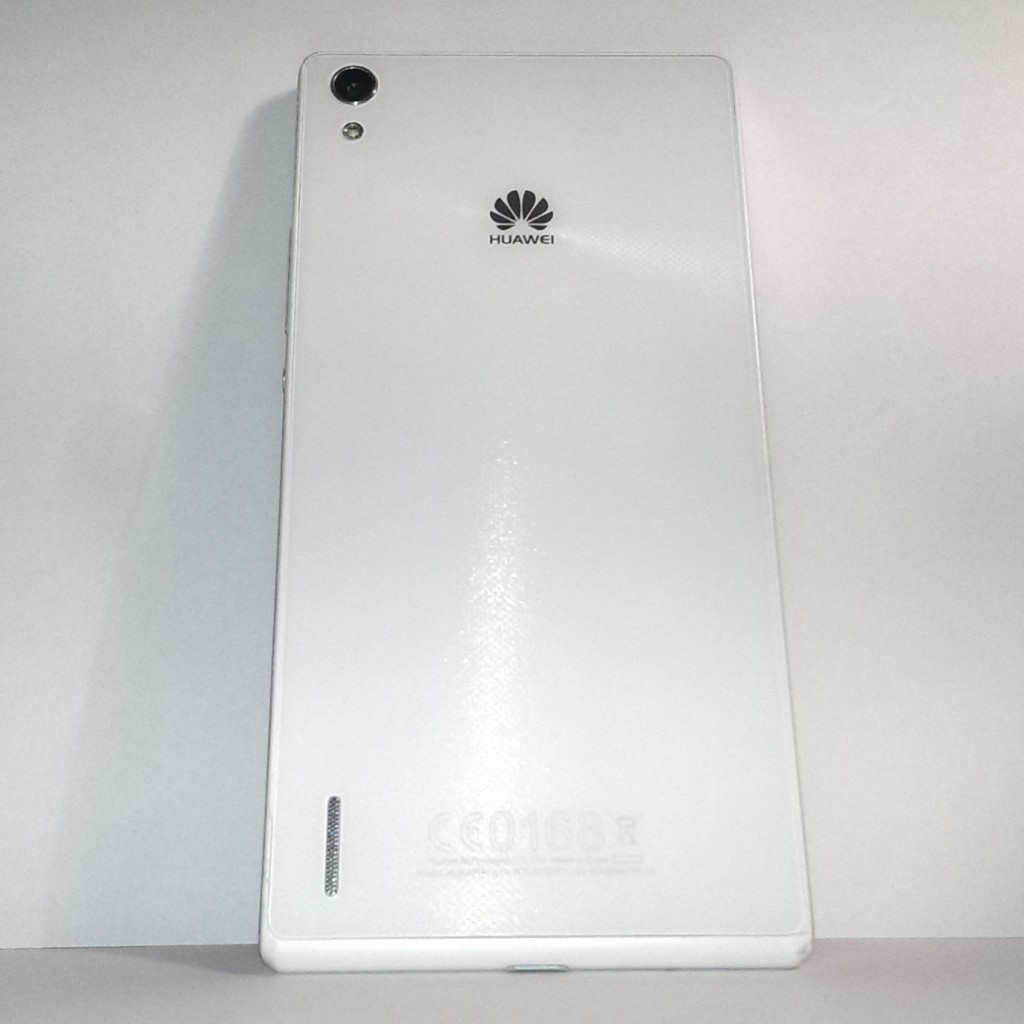 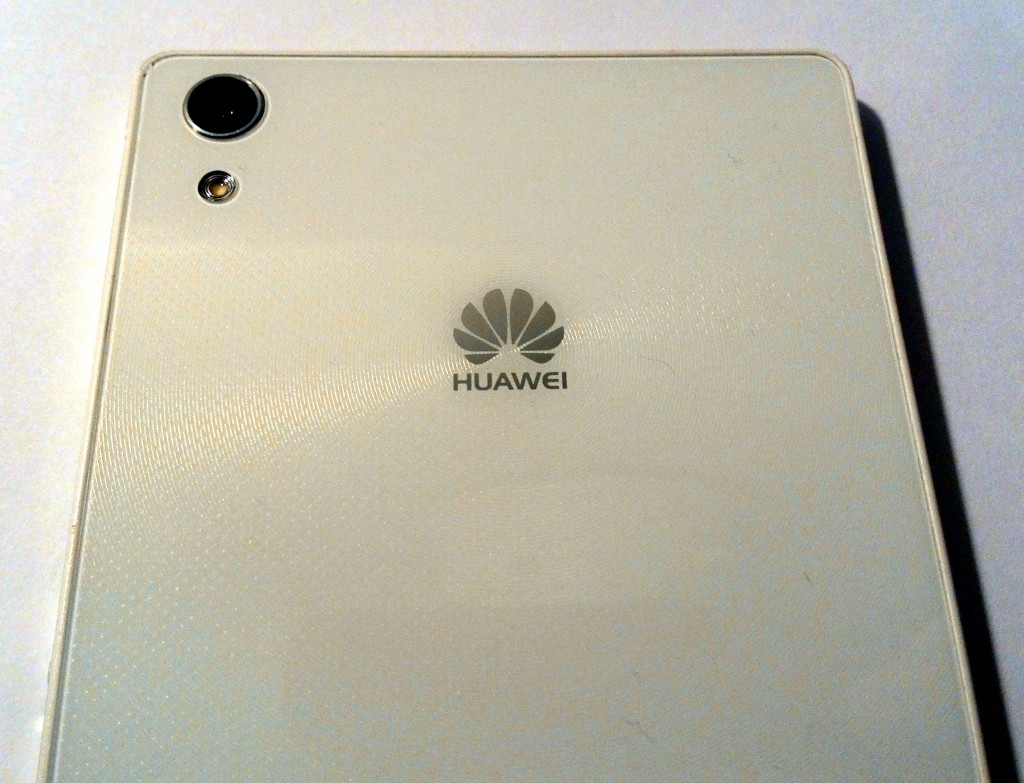 Big issue with that back panel, though: the glass coating makes it hands-down the most droppable phone I’ve ever used. It’s slipperier than a Gumtree estate agent. There’s nothing on the front, back or sides of the phone to give it any grip whatsoever, which means it slips down the side of the sofa, aquaplanes off level surfaces, and dives out of your hands all the time. Last night alone, it fell off my flat bedside table three times, scaring the living daylights out of me. The front and back are both coated with Gorilla Glass 3, which means they’re unlikely to smash or scratch, but I’d still only use this phone with a case. No one wants to be dropping their handset all the time.

On a brighter note, the Ascend P7 is very thin and light at 6.5mm and 124g (although I suspect it’s lost some battery power to make room for that), and the headphone and charging ports are well-placed on the top and bottom respectively. The power button looks a lot like the Xperia Z2’s: a round silver dealie below a standard volume rocker on the right hand side. It’s slightly awkward placement for taking screenshots (which is slow – you have to hold the buttons down for a long time) and could do with a bit more space between the two, but only if I’m being picky. There’s a black version available if you’re not keen on white.

The rear-facing speaker sits in the bottom-left corner, which seems a bit odd until you consider that you’re much less likely to cover it with your hand that way. Output is good and loud for both music and calls, and the back panel doesn’t vibrate at higher volumes. HTC’s BoomSound speakers do a better job of playing music, but the Ascend P7’s Dolby-enhanced speaker is as good as most mid-high end phones offer.

Under the hood, the Huawei Ascend P7 has pretty good specs (quad-core 1.8GHz processor, 2GB RAM), but its performance tells a completely different story. Lag, stutter and confusion abounded almost every time I used the phone. Even just unlocking it is a chore: it tells you to ‘Slide to unlock’ (sound familiar?), but about half the time it decides you didn’t do it properly and ignores you.

Something as simple as tapping a link in an email caused my music to skip, apps often took aeons to load (or didn’t load at all – the black screen below is supposed to be Facebook), and worst of all, the phone often can’t deal with typing. I installed my preferred SwiftKey keyboard to see if it solved the issues I was having with the preinstalled Swype one, but no dice. Type a message and often, the phone won’t give you any haptic (touch-vibration) feedback for the first half of the sentence, then suddenly go berserk cramming it all into the second half.

Games were a similar story. Even Angry Birds stuttered at times – this definitely isn’t one for playing graphics-intensive titles on.

The Ascend P7 runs Android KitKat, as you’d expect at this price, but with the Huawei Emotion UI over the top. As we saw with the EE Kestrel, it’s not a beautiful UI, although there are lots of themes to make it your own, including a Simple one that looks like Windows Phone:

Emotion UI’s biggest departure from stock Android is removing the app drawer, or the menu where you find every app you’ve installed. Instead, you have to find a place for every single app – including preinstalled ones that you don’t want and can’t get rid of – on your home screens. This is an unnecessary change that has no benefit to the user. I talk more about this in the video review:

Huawei have also chosen to use software buttons instead of capacitive (soft physical) ones – the Home, Back and Apps keys sit at the bottom of the screen when it’s on. I’m not a fan of this on any phone, but it was particularly frustrating on the Ascend P7 because sometimes the phone didn’t feel like bringing up the keys when I tapped. More than once, I had to change the volume to prompt the phone to display them.

If you need to expand the phone’s built-in 16GB of storage, there’s a microSD slot next to the SIM tray on the side of the handset. There’s also 4G capability, and the option to put a second SIM in the microSD slot in some markets, which is handy. 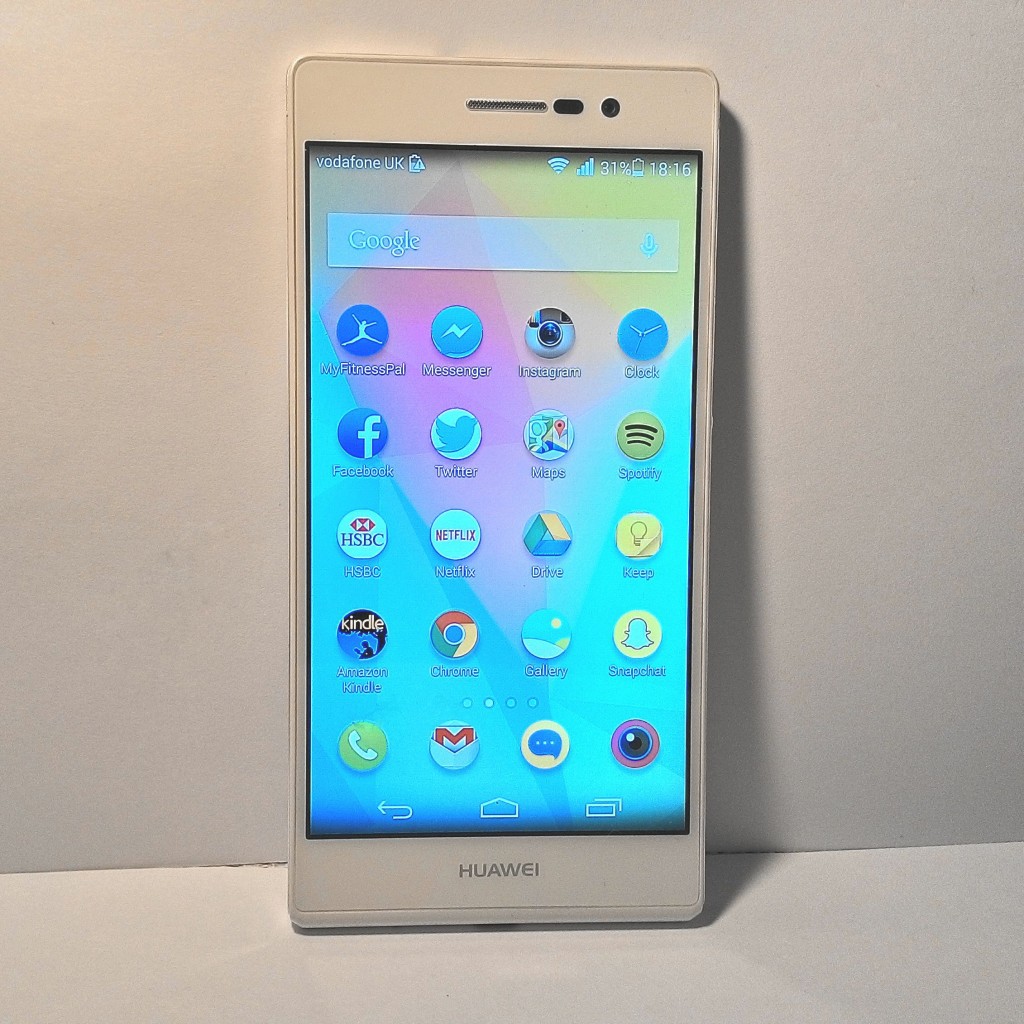 It’s an IPS LCD panel, which gives it wide viewing angles – you only lose a smidge of brightness when you tilt it. Movies and videos look pin-sharp, bright and colourful, blacks are a little milkier than I’d like but nothing unusual there. The size means that everything’s easily accessible with one hand, and the quality really does the camera justice.

Manually adjusting the brightness (there’s an Auto setting too) reveals an impressively bright top end, and there’s a colour temperature slider too if you like to fiddle. It’s a very readable screen, even in bright outdoor light (well, as bright as October can muster, anyway). Oddly, there’s a tickbox for ‘Sunlight readability’ in the settings – not sure why you’d turn that off!

Add that the whole thing’s covered in Gorilla Glass, and you’ve got a really excellent screen. No complaints here.

The Ascend P7 has one big thing to shout about in the camera arena: it’s got a better selfie camera than almost all of its competitors. The 8MP front-facing is an excellent addition to the phone, taking sharp, clear shots quickly. It’s always a good sign when I reach for a review phone instead of my main one to take a picture, and I trusted the Ascend P7 to do a good job of my all-important Robin Hood hat: 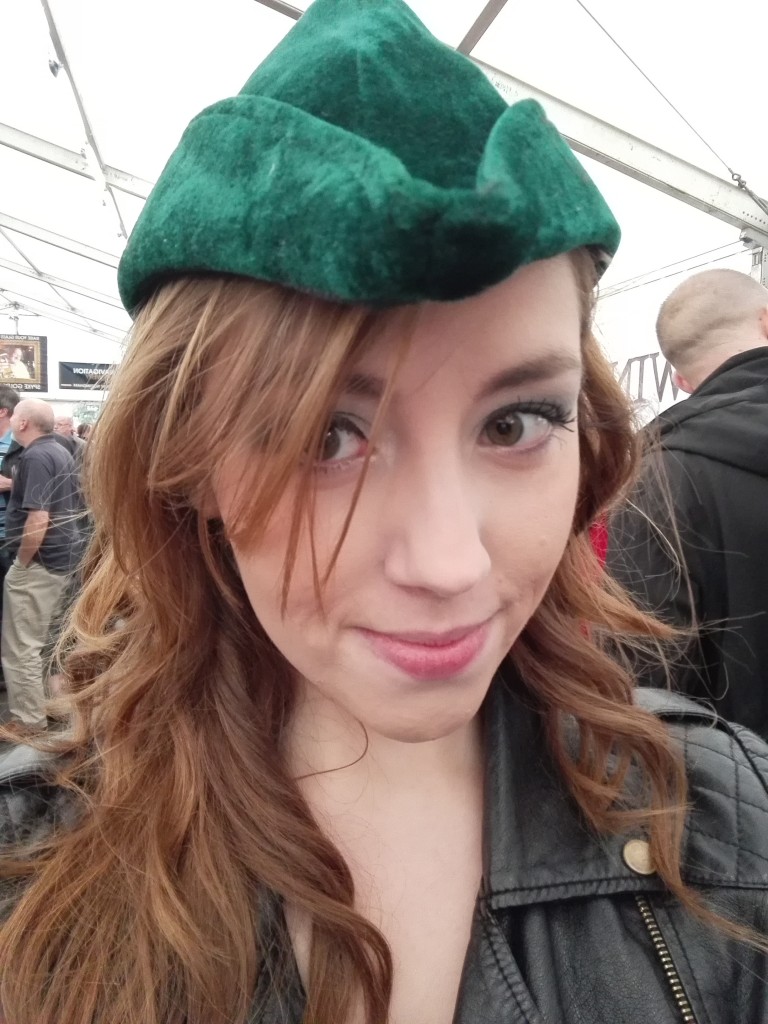 Predictably, there’s a ‘Beauty’ mode with a slider to help you decide how economical you want to be with the truth. It blurs your face considerably, with the top setting giving you that eerie wax doll look. It’ll probably appeal to some people as a way to smudge out lines and blemishes, but anything above level 3 (it goes to 10) is too Uncanny Valley for my liking.

The selfie cam has another stand-out feature, though: the Panorama mode. Panoramas are pretty common for rear-facing cameras, but aren’t usually included for the front-facing. Why would you need a selfie panorama, you ask? Well, you can either take a group shot (which Huawei has regrettably named the ‘groufie’ – and trademarked it), or you can make a really cool photo of you and your surroundings. In this example, the bench looks a bit wrong – but imagine how great it’d look with a skyline or dramatic scenery behind you:

The Huawei Ascend P7’s main camera is also strong, although it has tougher competition than the front-facing. At 13MP, it’s slap-bang in the middle of mid-high average camera specs. It doesn’t offer anything unusual in the software either, except for a strange feature called Watermark that lets you add text, Snapchat-style, to your photo before you take it.

The HDR and panorama modes work well – note the difference in light between the first picture (no HDR) and second (HDR on): 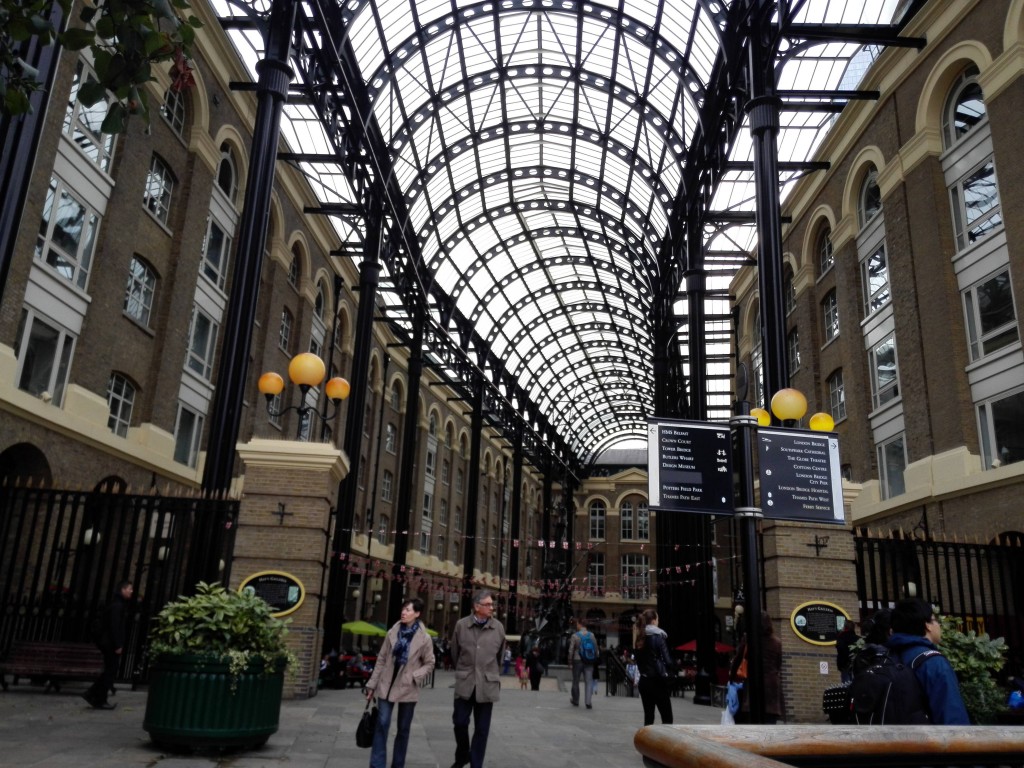 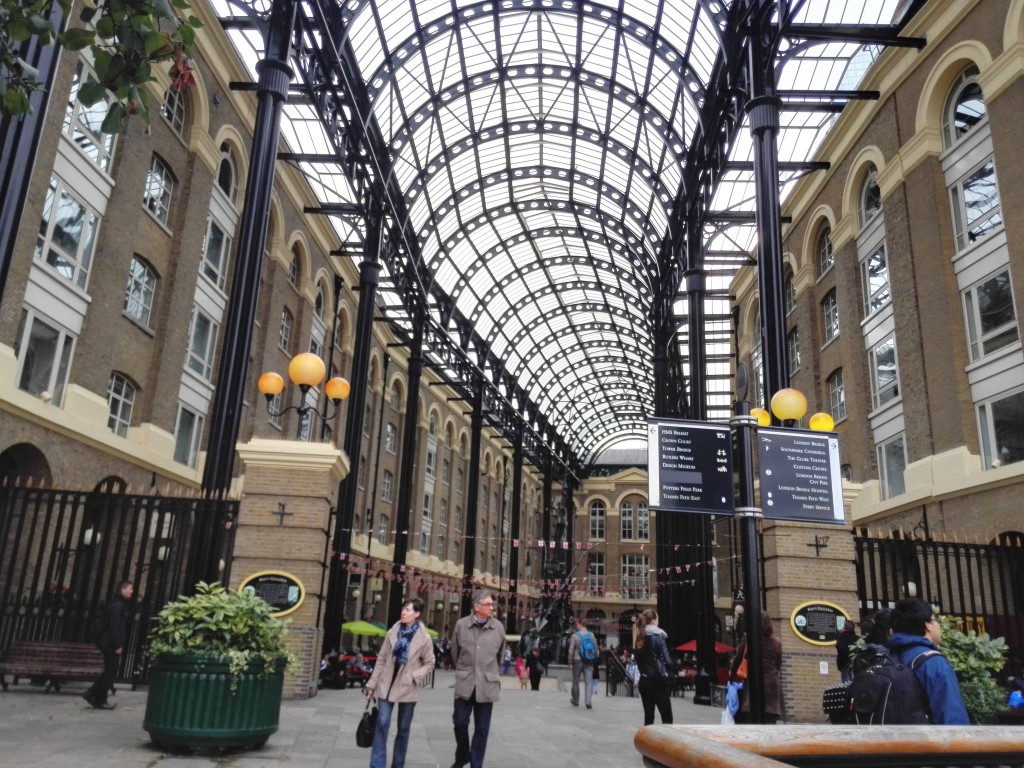 On Smart mode, photos mostly come out clear and detailed (even on a gloomy day – cheers, London): 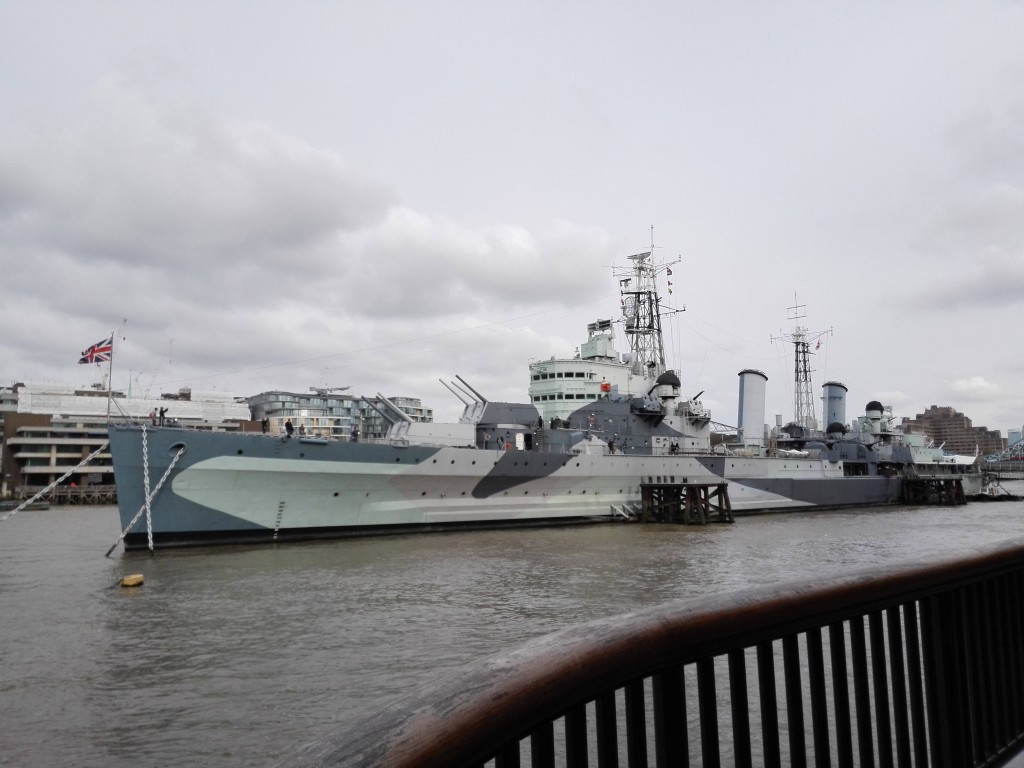 Cropping into the centre of the photo reveals a little grain but a lot of detail considering the distance: 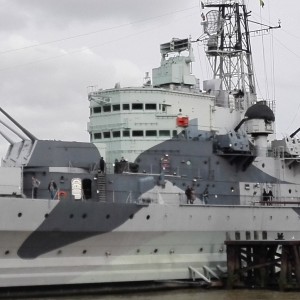 These two photos were taken in full daylight and lower evening light. The artwork under the clock has gone smudgy in the second photo, and there’s too much glow from artificial light, but the detail in the roof is still good: 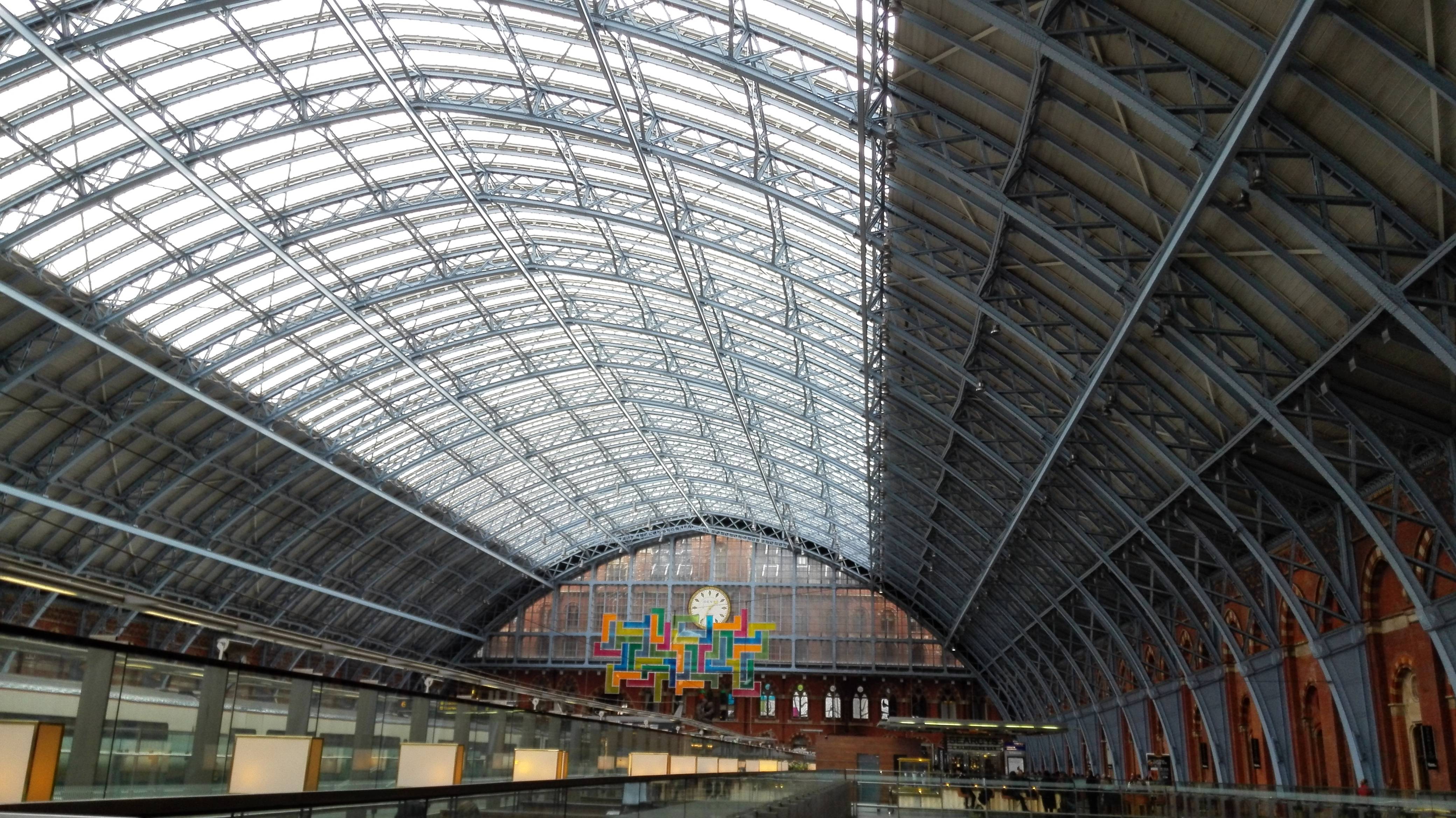 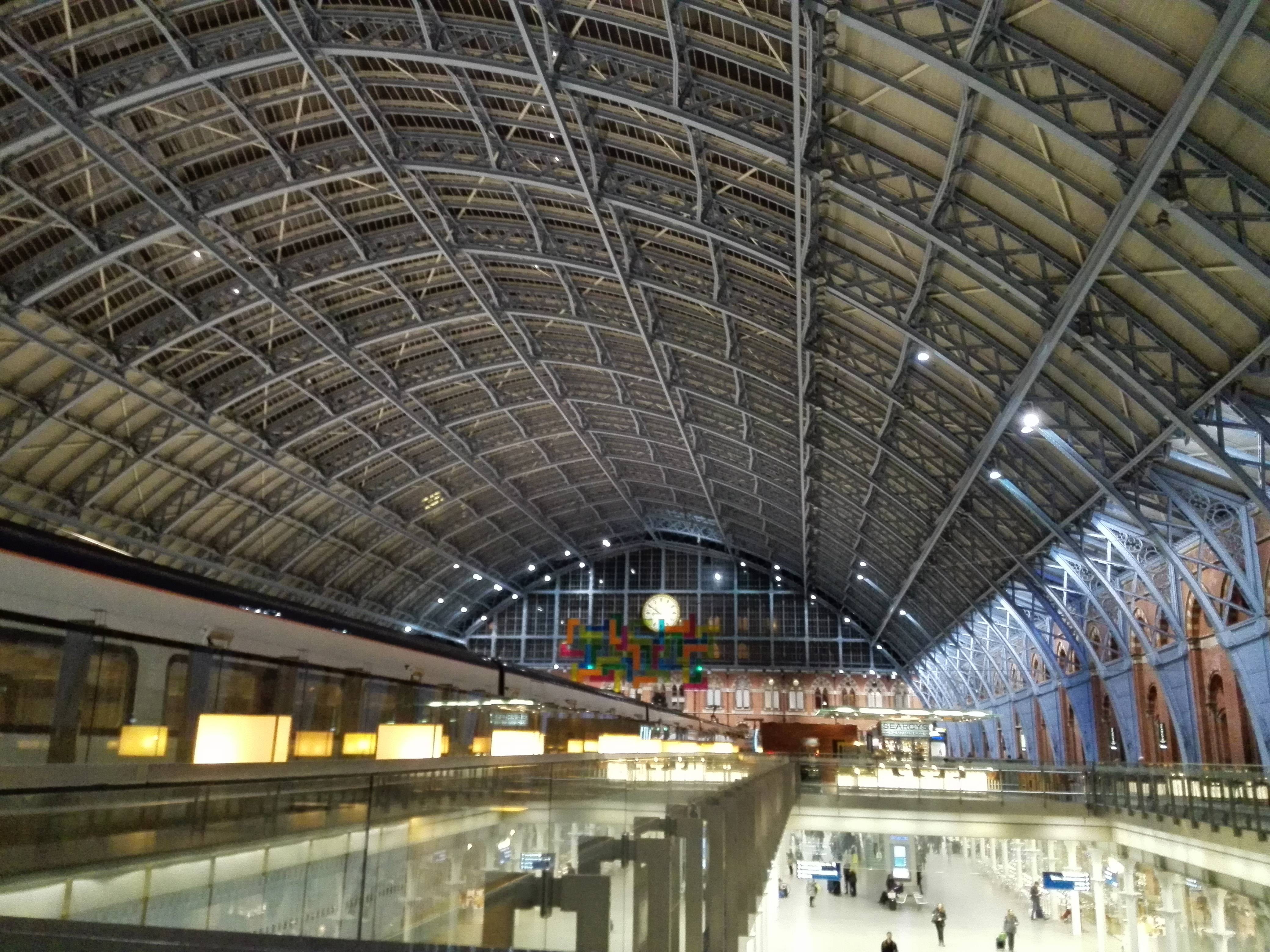 There’s also an LED flash, which I would recommend not pointing at your friends on a dark evening. They didn’t forgive me for some time.

The Ascend P7 has a non-removable 2500mAh battery, which as I mentioned earlier, is probably lower than it could be because it had to be so thin. Performance on normal use days is on the low end of average: juice gets low around mid-evening. Heavy use drains the battery much faster: after 2 hours of streaming a fullscreen film over Wi-Fi with GPS on and brightness at maximum, battery power fell from 100% to 43%.

That’s an unusually bad result: the Huawei-made EE Kestrel has a 2000mAh battery (a fifth smaller) and still had 50% left after the same test. Since they both run Emotion UI, it seems likely to be a hardware issue rather than software: possibly caused by the very bright HD screen, or just a substandard battery unit.

I think Huawei know the battery is puny, because the phone is constantly nagging you to preserve power. It notifies you whenever an app is using power “backstage” (lovely phrasing) and also when an app is using what it thinks is an unacceptable amount of juice. It even tells you how much juice, in mAh. This is all very cool and useful, but the notifications quickly get tiresome and you have to turn them off on an app-by-app basis. I’m also still getting notifications for apps I switched off. This earned the phone the nickname “Navi,” after the Legend of Zelda character who constantly shouts “Hey! Listen!” at you when you’re trying to get stuff done. 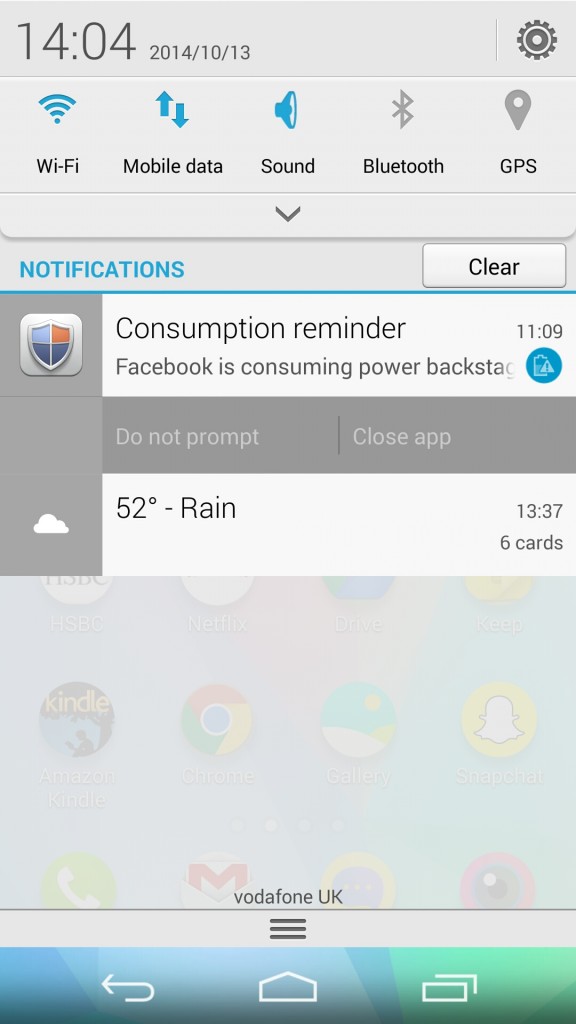 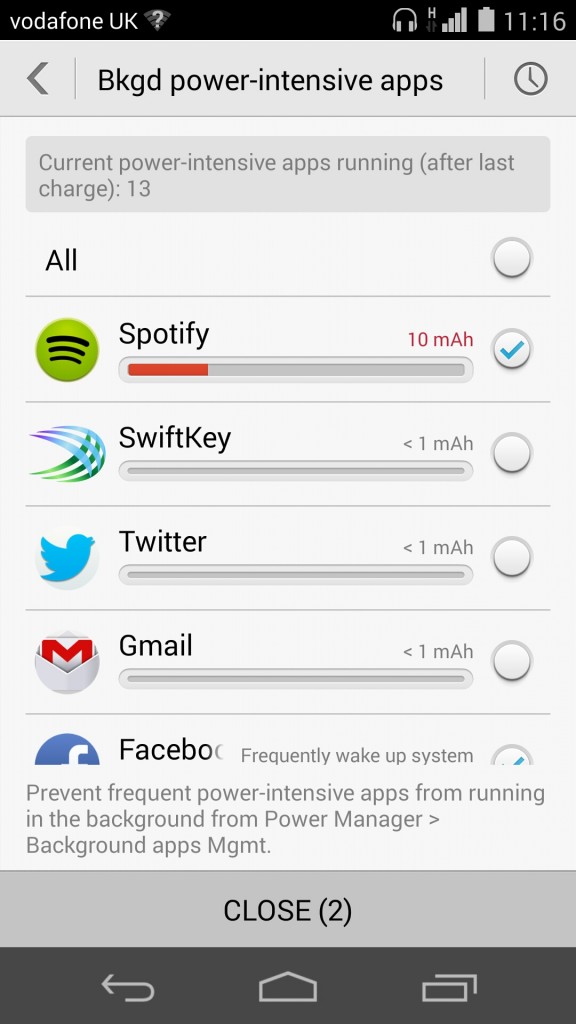 There’s also the now-ubiquitous Ultra Power Saving mode, which limits phone use to calls, messages and contacts. It’s very effective, but doesn’t allow any customisation: if you’d rather have access to WhatsApp than the stock text message app, you’re out of luck.

The Huawei Ascend P7 ended up scoring in the ‘average’ bracket, but in this case, that’s not accurate. It’s a mixture of the brilliant and the rubbish. The slipperiness, battery and lag are major downsides, combated by the excellent selfie camera, its innovative panorama function, and that gorgeous screen.

The slip of the phone is easily fixed with a case, although it’s a shame to lose the sophisticated design (and presumably the decision to cover both sides in Gorilla Glass was to reduce the need for a case, which has backfired considerably). The performance problems might well be software-related, because the tech specs are actually pretty good: I’d be very interested to see how this performed with stock Android installed. Battery performance isn’t terrible and the screen is excellent, so if you can live with the lag, this might be for you. But there’s no guarantee those performance issues will improve with future software updates, and I personally wouldn’t risk it. Plus, the HTC Desire Eye is about to hit shelves, which will likely to draw selfie lovers away from the Ascend.

Overall, this is a slim, light and attractive phone that takes great photos and shows them off beautifully. But while I could probably live with the battery life and bar-of-soap feel, the lag is a dealbreaker for me. Sadly.