Over the past few years we’ve watched the tech market become saturated by wearable health-tracking gadgets designed to provide us with more visibility about the way we move, what we eat and how we go about our day-to-day lives.

However, many of us know that being truly healthy both inside and out requires much more of a holistic approach.

Eat well but don’t push your boundaries creatively or challenge yourself at work and you may feel stifled. Work on your body loads at the gym but don’t concentrate on the tension and stress inside and you’re likely to just be burying a lot of inner conflict.

There needs to be more joined up thinking when it comes to our physical health, mental health and overall wellbeing.

This is why I’m particularly interested in whether there’s scope for both mainstream wearable tech aimed at consumers and devices designed for a more professional, medical setting to better monitor, manage and understand mental illness.

Understanding the complexities of tech and mental illness

Of course mental illness can refer to a range of different emotional and psychological issues and in most cases the illness is unique to each individual. So a particular type of treatment, for example talking therapies or medication, might be massively beneficial to one person but show little sign of improving the condition of another – even if they’ve received a similar diagnosis.

The highly personal nature of mental illness means that we need to tread carefully when we begin to explore the role tech can play in making a difference.

For example, we can’t expect an app that encourages mindfulness to have as much of an impact on someone with clinical depression as it does on someone with infrequent bouts of mild anxiety. Although at the same time it could. This is the nature of mental illness. It’s not easy to predict, to manage or to ‘cure’ (despite what mainstream media may sometimes lead us all to believe).

At present, some of the popular brands that are currently touting their wearable tech products have added in mood-tracking features as a nice-to-have afterthought. But most mainstream wearables are designed to track little other than our sleep cycle and steps, so any encouragement to journal or comment on how users feel each day within their accompanying apps is an add-on to encourage introspection rather than a way of using the devices to inform any useful recommendations.

However, there are a few consumer-focused companies making wearable gadgets specifically designed to provide you with a better understanding of your mental state.

Phyode recently launched the W/ME (or with me). It looks a little like the wearables from Fitbit and Nike+, but promises to provide you with an insight into your mental state, mental ability and breathing – as well as giving you the tools to make positive changes when you feel a little out of control. The W/ME comes with a Life Spectrum Analyser sensor, which can monitor your autonomic nervous system (or ANS) without the need for complicated equipment or conductive gel and takes EKG readings. This allows it to feed you data that can paint a pretty accurate picture about your current mental state, which it then uses to coach you into feeling less stressed and ‘emotionally-aroused’.

The success of the W/ME and other consumer-facing devices like it in improving our mental wellbeing remains to be seen. But interestingly it works on a similar – albeit more basic – premise as a band currently being developed by researchers at the Massachusetts Institute of Technology (MIT).

According to the Harvard Gazette, Rosalind Picard, a professor of media arts and sciences at the Massachusetts Institute of Technology (MIT) and MIT Media Lab, has been working on a sensory wristband that gauges our body’s emotional response to certain situations in a bid to better understand our emotions.

Picard’s wristband is able to gauge how we’ve responded to external stimuli by ‘tapping skin conductance, an indicator of the state of the sympathetic nervous system, which controls the body’s flight-or-fight response by ramping up responses such as heart rate and blood pressure.’ So essentially, Picard’s band is measuring similar vital stats as some more advanced wearable devices (like AliveCor’s heart rate monitor and Zensorium’s Tinke) but the difference is she’s using the data to provide her team with a better understanding of the lives of those living with epilepsy, sleep problems, depression and even autism:

Although a lot of Picard’s work focuses on the insight her wristband can bring to children living with autism, it certainly has implications for those with a mental health problem who find it hard to understand what triggers anxiety, panic and ultimately depression. (For those interested in further reading around Picard’s work, I recommend starting with the YouTube video from her lecture Your Future Smart Wristband.)

But it’s not just breathing, heart rate or skin conductance that can give us an insight into what might be happening to our emotions. There’s recently been an influx in other kinds of devices packing different kinds of sensors that promise to give us a better understanding of our brains. Many of these devices, branded by some tech commentators as ‘thinkables’ are marketed to improve people’s memory, cognition, etc. But as they’re packing EEG sensors they could certainly be used to help better understand and tackle mental health problems too.

There are a range of devices on the market at the moment that claim to be able to read your brain waves using EEG-sensing tech, like the Muse headband and Emotiv Insight. The latter promises to ‘measure and monitor your cognitive health and wellbeing’, providing you with detailed insight into how relaxed you are and the signals your brain is firing around.

Of course the issue with these sci-fi-looking devices is whether you’re going to be able to wear them for an extended period of time to understand more about your mental health. Putting one on when you’re feeling stressed may help to calm you down, but it’s not likely to help with the root of the problem. (More on ‘thinkables’ and ‘brain wear’ from me later in the week.)

The importance of data interpretation

I’d argue that it may not be the types of sensors that are important, whether we decide to wear a monitor dedicated to tracking our breathing, our heart rate or our brain waves, but it’s what we do with that tracking data that counts just as much as the tech behind it. At the end of the day, collecting data about anything, whether it’s our heart rate or steps while we run, doesn’t really mean anything in the long run.

Sure with more visibility you have more knowledge, but I think it’s the mixture of recording, tracking, journalling and then coaching that excites me most about tech’s role in better understanding and tackling mental health issues.

One of the biggest issues mental health professionals have when it comes to treating patients with depression, anxiety or other forms of mental illness is that they can’t monitor their patients’ moods all the time. When patients visit these medical professionals they’re often asked to fill out forms about what kind of week they’ve had, like how often they’ve felt a certain way and they’re asked to gauge each of these emotions or situations out of ten. This kind of information could be invaluable However, if you’ve ever done this before you’ll know how extremely challenging it is to rate your week retrospectively – particularly if you have an emotional state that isn’t always consistent and you’re prone to ‘highs’ mixed with ‘lows’. So this is when wearables and the apps and platforms that accompany them could prove to be extremely useful, in helping professionals and patients build up a more accurate picture of the triggers throughout the week.

The next challenge would be to use that data to inform future steps and treatments effectively once it’s been analysed. Many tech companies are pre-occupied with the user experience within their dashboards or how nicely their apps swish up and down yet overlook the next steps – how to make all of this data meaningful. For example, Phyode’s accompanying app coaches users into calming their breathing and getting their heart rate down, which won’t solve more serious mental health problems, but is certainly a step in the right direction. 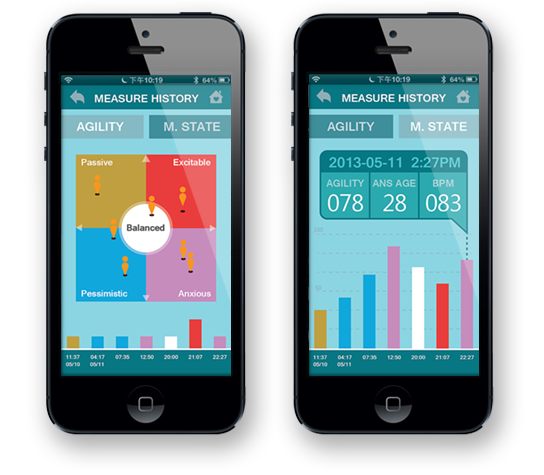 The future of wearables and wellbeing

I think over the next few years we’ll see a rise in wearables aimed at regular consumers that are tipped to enable us all to better understand our moods, emotions and mental health problems. Some of these may make a huge difference to some keen to work on their wellbeing independently, could be used in conjunction with other treatments and therapies or could just prove to be ‘snake oil’ gizmos. (I’m particularly sceptical about the ‘bran wear’ devices, but maybe it’s just how they look that puts me off so much?)

It’s certainly fascinating to read about the research being conducted in medical and academic circles too, as experts in mental health, wellbeing and psychology will presumably be at the forefront of using tech to tackle mental illness rather than the tech giants. Or at least I’d like to think so.

The key seems to be understanding which areas of the body can truly help us understand mental health issues, measuring these stats and signals using the latest tech, presenting data in a meaningful way and then actually doing something with it.

Of course we might not need wearables to make a difference to mental health at all, but if they can help us to paint a broader picture of these kinds of illnesses, provide both individuals and professionals with a better insight into individual needs and triggers and help to inform future treatment, then we’re looking forward to seeing what they can offer over the coming months.