You’re either the type of person who will find Somebody, the new social networking iPhone app from writer and filmmaker Miranda July, incredibly lovely and charming, or the type of person who will want to throw a shoe at it. Based on the idea that ‘when you can’t be there… Somebody can’, the app bequeaths your messages to strangers, who deliver them to your recipients in person. Yes, in person. There are voice directions and gestures to add too.

If you’re already untying your laces in shoe-chucking preparation, it might help to explain that Somebody is less a startup, more an art project. July, who you might know from her films The Future and You, Me and Everyone We Know and her celebrity email project We Think Alone, produced the app with Miu Miu as part of its Women’s Tales series – which explains why it looks so fantastic, if not much else.

There’s also a short film to accompany the app, which premiered last month at the Venice Film Festival. Or rather, the app accompanies the short film – which features people breaking up, making up, proposing and er, sexting their pot plants, all through Somebody – and the quirky pay-off at the end is that the fictional app is real after all.

Being both massively sceptical and also terrified of missing out on anything new, I yelled ‘It’s a joke! It’s a spoof! It’s stupid and NOT REAL, I won’t be duped!’ all the way through the film, and then downloaded the app immediately.

Beautifully designed (if LinkedIn looked like this I might care a lot more about my career), it’s nevertheless about as clunky as you’d imagine a semi-fictitious app developed for a film festival to be. I had to install, delete and then reinstall it twice to get it to work, and even now I can’t find the button to invite new contacts. But hey, maybe elusive user experience is all part of the idea.

‘It’s kind of complicated and weird, and it’s the opposite to the very efficient means of communication we’ve developed in the last few years,’ July told AnOther Magazine last week. ‘In the end the question is: are there important things we are not getting by being so efficient in our communication, like joy, and could we introduce some of that joy into something that starts with our phone?’

As someone who finds keeping up with messages via our ‘very efficient means of communication’ still rather challenging, I don’t know if I love or hate the idea of a network where my messages might not get delivered for five days – or at all. Miranda’s right, that flimsiness of contact is seriously unsettling to our modern minds. Is this how olden-days people felt when they confessed their undying love to someone by letter, delivered on horseback? How long did you wait for a response before you just gave up and married someone else?

I’d love to tell you I’ve already changed my outlook and made lifelong friends through Somebody, but the truth is I’m still waiting for my off-screen human contact to happen. I’ve sent a message to my boyfriend saying I like his yellow t-shirt, which is currently ‘floating’ until someone volunteers to deliver it to him. I’ve also volunteered to deliver a message to someone up the road, who has very inconveniently gone out. 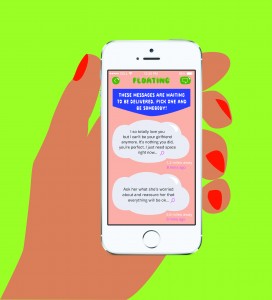 And being a flawed human, I can’t help but think I could skew the messages to my advantage.

‘Hello! Your mate says she can’t come to Kate Bush anymore and you should give the ticket to me.’

‘Your mate says to solve your existential crisis you should buy this nice blonde lady some HobNobs.’

My moral compass aside, there is actually something unexpectedly sweet about eavesdropping on other people’s conversations. From the tiny snippets I’ve seen, some of the Somebody users in my area are the types of people I might like to be friends with. And if it wasn’t such a tremendous faff to put some shoes on, go out and find them, maybe I would be.

Of course, issues of safety have been raised by users (just how heart-warming is it to send people out to hunt down your mates at any time of day or night?), while the number of people willing to go out and stage performance art with a total stranger for no concrete reward will probably always be on the small side. But as a concept it’s definitely thought-provoking, and if the idea actually took off then it might just be a game-changer.

If I ever get to join in the fun, I’ll let you know. Or if not me, Somebody will.

Inspired by Miranda’s creativity, here are my 10 ideas for BRAND NEW social networks. Watch this space, they might just come to life…