Smartwatches are a fairly new member of the gadgets family, and have yet to really reach the same level of popularity as smartphones or tablets. Considering they have yet to ingrain themselves into mainstream society you might not be aware of what smartwatches are, and chances are you have seen many out in the world, but didn’t even realise it wasn’t an ordinary watch. So what are they?

As the name suggests a smartwatch is an upgraded watch that is basically a wristborn computer, similar to how a smartphone is a small computer masquerading as a phone.  Because a smartwatch utilises computer components, it means they are capable of performing actions that far exceed simply telling time. In fact, some of them are even capable of browsing the internet.

So why do you need one? Can’t you just check your phone for the time? Yes, but the smartwatch is primarily utilised as an extension of your smartphone so that you don’t have to keep pulling it out of your pocket all the time.

By linking to your phone via Bluetooth, your watch becomes capable of displaying notifications on your wrist. Can’t tell if that buzz is a text or an email? A quick glance at your wrist will tell you that, plus more, and it only takes a split second to do so. All smartwatches function as communication centres, but some high-tech smartwatches even allow you to reply to messages and even take calls. As mentioned before, some of them even connect to Wi-Fi and let you surf your web on your teeny tiny screen.

Well now you know roughly what a smartwatch is, which ones should you be buying. Read on to find out.

This one is a bit of an oddity because it’s not exactly a smartwatch, and it certainly isn’t a watch that you’ll want to wear all the time. No the Sportwatch is designed for exactly what the name suggests: sport. Basically when you go out for a run the watch will track you via GPS and record all your sport data along the way. It’s also capable of storing the history inside your watch for you to look over later on, and can connect with your friends to find routes together and share run activity with each other.

It’s not really one for keeping track of notifications, but if you want something that’s going to help your exercise regime then this is something you should look into buying. Plus it’s a nice price.

If you want something that’s small, sleek, and looks great, then the Pebble steel is definitely the watch for you. The major bonuses of owning a Pebble is the black and white e-paper display, which significantly reduces the amount of power it uses and gives the watch a whopping seven day battery life. So no frantically scrambling to find a charger in the middle of the day for this.

Like any other smartwatch the Pebble can receive notifications and calls from your phone, but thanks to its age there is are over 1,000 apps available on the Pebble app store that will expand what your watch can do.

The best smartwatch for when you’re on a budget: Cogito Pop

Just because you don’t have a lot of money doesn’t mean that you should miss out on the smartwatch generation, and the Cogito Pop is a great way to get your hands on one without having to empty your bank account. Unless your bank balance is only £80, but in that case you have better things to spend your money on.

The Cogito Pop is a small colourfully designed watch that is water resistant up to 100 metres, has a year long battery life, and features a host of commands to make your phones do various functions like playing music, and taking photographs. It’s basic, but it’s cheap, and that’s what you really want.

The best smartwatch for when money is no object: Qualcomm Toq

Most rechargeable smartwatches are annoying in that they have to be plugged in like a phone to recharge the battery, luckily the Toq is not such a watch, because it can be charged wirelessly using a watch’s stand. It also has features that allow you to forward calls to your wrist, as well as voice-to-text functionality so that you don’t have to type anything down on the fairly small screen. Sadly for iPhone users it’s only compatible with Android devices.

The Toq isn’t available in the UK specifically, so you’ll have to get it imported from the US. Fortunately, if money really is no option then that shouldn’t be an issue paying for it to get past customs and be delivered straight to your door.

Smartwatches are usually fairly conspicuous, especially if they have the rectangular face shape. You might not want to show off that you have a fancy watch, so being inconspicuous is key. Fortunately a number of smartwatches do hide their smart nature, but none so much as the Martian Passport. It’s impossible to tell that this isn’t a regular watch because it is a regular watch — albeit one with some smart capabilities. Think of it as a hybrid if you will. The Passport not only has a small section of the screen dedicated to showing you your notifications, it can also lets you take calls on your phone. All this making it perfect to have the advantages of a smartwatch, without feeling like you’re showing off.

All these new fangled gadgets are a bit complicated aren’t they? Wouldn’t it be better if you had something small and simple to work with? Well it sounds like you might want the Cogito Classic. For starter’s it’s almost indistinguishable from a regular watch with it’s regular design, and secondly once linked you only see a basic notification from your phone. Whether it’s a call, text, or email, you’ll get a little icon that appears on your watch face to let you know what’s what. It’s also water resistant up to 100 metres, and has a yar long battery life. You won’t get any fancy functions here, but isn’t that what simplicity is about?

Now this is definitely one that will remind you of the old G-shock digital watches, because the design has barely changed.  The G-Shock Bluetooth Watch definitely isn’t one for those of you who want your smartwatch to be stylish and nice to look at, no this is one for the people who want the advantages of the smartwatch without having to sacrifice durability.

Not only is it totally waterproof (up to 200 metres), it also has a two year battery life even when you’re using the Bluetooth connectivity regularly. The downside is that this is the least “smart” of the smartwatches, but still allows the watch to communicate with your phone and notify you of any calls, emails or text messages. You won’t be able to see what they say, but you can see when you recieve one of the three, as well as being able to differentiate between them. 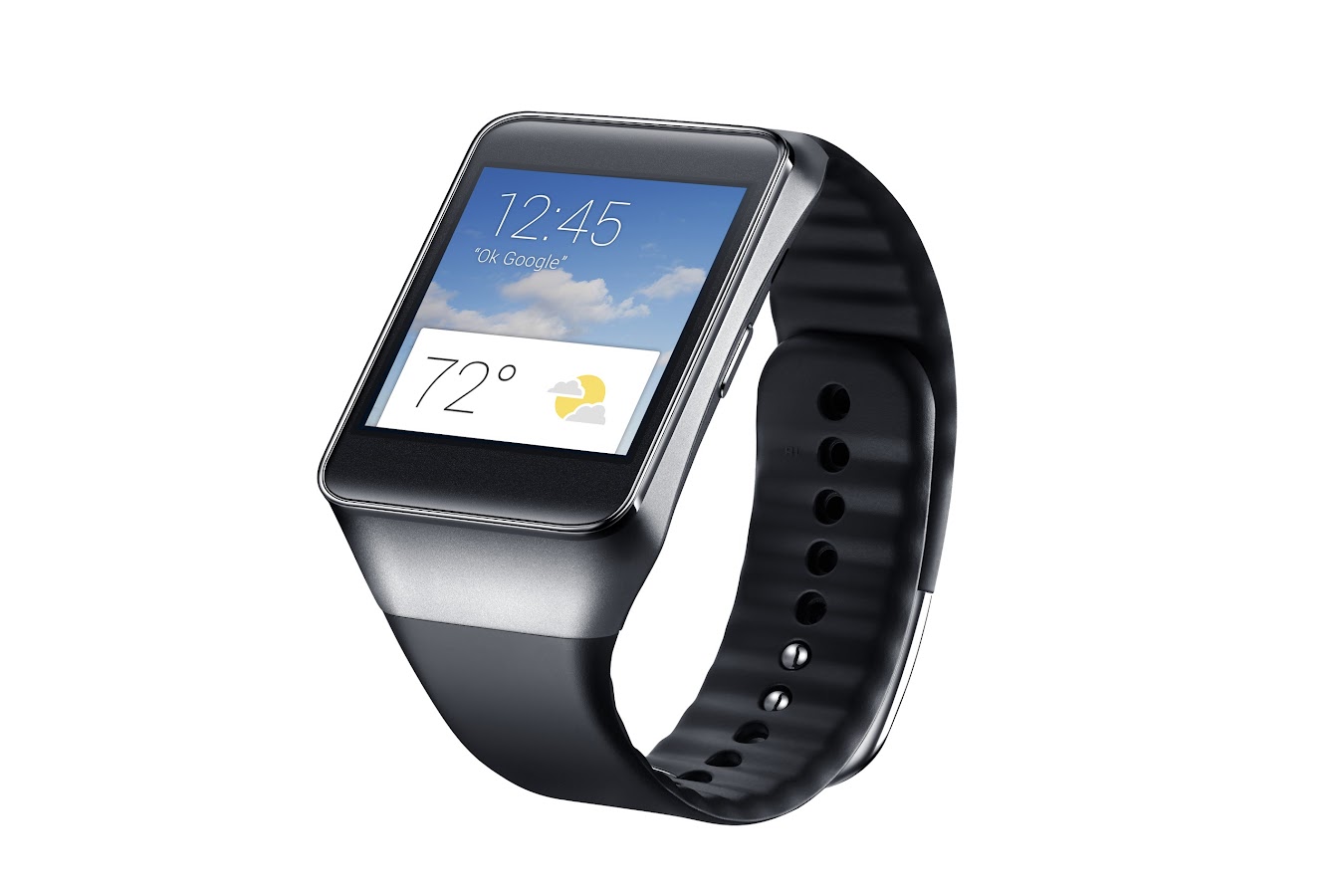 Smartwatches haven’t been big on the apps, the screen is pretty tiny after all, but fortunately the arrival of Android Wear has meant that there are now a number of smartwatches that utilise Android’s infrastructure to enhance your smartwatch experience. There are dozens of new Andrid Wear apps being released every week, making an Android Wear smartwatch the ideal pick for the app aficionados out there. One of the better Android Wear options is the Samsung Gear Live.

Sure it might look like a digital watch from the 70s,but you have a nice sleek watch that has access to Android’s vast array of smartwatch apps.

The best smartwatch for the person with a phobia of smartphones: Samsung Gear S

So far the smartwatch has been unable to take the place of the smartphone, instead relying on phones to let them reach their full potential. Those days may soon be over now that the Gear S is on its way, because this is the first smartwatch to include a 3G connection. That’s right, it’s capable of using phone networks to surf the web, text, and make phone calls, all from your wrist.

It won’t replace your smartphones just yet, and still functions as a linked notification centre, but as the first of its kind it shows remarkable potential for the future of the smartwatch itself.

The smartwatch for Apple fans

Apple first foray into the world of smartwatches has been anticipated for a very long time, and at it’s 9th September event Apple showed off the device in its entire glory.

The Apple Watch has the same typical look as most smartwatches, the rectangular watchface on a strap. It comes in two different sizes, with sizes different types of strap that are made from leather or stainless steel. There’s a sapphire glass screen to deter scratching, and NFC for use with Apple Pay. The Apple Watch also does your typical smartwatch functions: it can be used to receive and reply to notifications from your phone, includes Siri as standard, and can direct you using GPS and directional vibration so that you don’t have to stare at a phone if you don’t know where you’re going.