You might not have noticed, but there’s a little cake competition on TV at the moment.

Alongside the emotional peaks and troughs, the perfect piping and the collapsing pastry and the ‘bincidents’, The Great British Bake Off is also doing more to get the nation baking than decades of Home Economics lessons ever did. Supermarkets have reported huge boosts in ingredients and bakeware since the show returned to our screens in August, with viewers rushing to recreate the showstoppers they’ve seen on screen.

Gadgetry has come a long way since Mary Berry baked her first sponge, too. From perfect mixing to temperature-controlled rolling and snazzy finishing touches, we’ve rounded up a few of the most exciting ways that technology can enhance your baking. 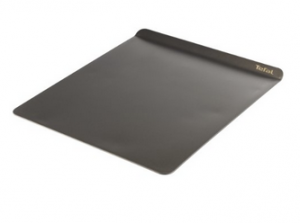 Best for (not) feeling the burn: AirBake baking sheet

If you’ve produced more cremated cookies than gooey, chewy ones, you probably need AirBake baking sheets. Made from two sheets of heavy aluminum with a gap in between, the circulating air reduces the temperature of the metal that comes into contact with your bakes. This means everything cooks more evenly, so you won’t end up with charred bottoms and soggy middles. Some even say they make it ‘impossible’ to burn biscuits, which sounds like a challenge to us… 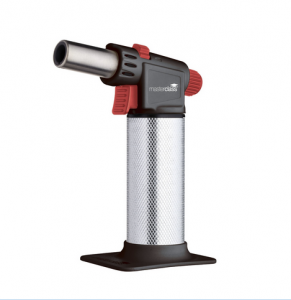 Best for Alaskas that don’t end up in the bin: Master Class blowtorch

You might have been so traumatised by Bake Off #bingate that you didn’t notice all of the nifty blowtorching going on afterwards. But there’s only one way to brown a baked Alaska without melting the ice cream beneath, or achieve the perfect caramelised crust on your brûlée, or very quickly make toast when you’re running late in the morning* – and that’s a blowtorch.

Kitchen Craft’s Master Class Deluxe blowtorch reaches a ‘professional temperature’ of 1300°C and has a safe-grip cylinder to make sure you avoid any kitchen ‘incidents’ of your own.

*Yeah ok, don’t try that one at home.

Having become so beloved by bakers you’d be forgiven for thinking Silicon Valley was a neighbourhood full of cupcake shops, silicone has basically revolutionised bakeware. Non-stick, stain-proof and easy to pop your bakes out from, you can find silicone whisks, silicone cake cases and every silicone mould your greedy mind can imagine (buckets and spades? If you say so, Lakeland).

But for sheer economy/gluttony, you can’t beat a silicone spatula. They ensure that every last dollop of cake mix from the bowl will end up in your pan/mouth. The clever Elevate range from Joseph Joseph also has an in-built tool rest to make sure the spatula head never touches the kitchen surface – and there’s a mini one, perfect for scraping the last out of the Nutella jar. 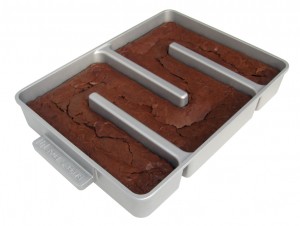 Ever wanted to make your bakes edgier? America has found a way. Based on the assumption that edge pieces are the best pieces, at least where brownies are concerned, Baker’s Edge invented this ingenious pan to ensure that every portion of brownie has at least two chewy edges. The patented interior ‘sidewalls’ also help distribute heat evenly around the mixture, so that the centre bakes as quickly as the outside. There’s even a matching lasagne pan for crispy pasta fans.

We’d make a joke about U2’s guitarist, but that might be a little too edgy. 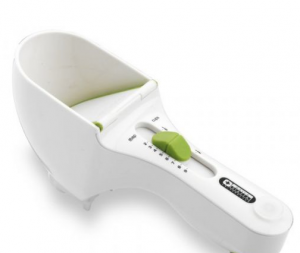 Sure, those pretty little bundles of measuring spoons have overtaken humble cutlery in recent years – but wouldn’t one utensil be even easier? Nuscup’s clever measuring scoop has an adjustable flap that can take the volume from 0-6 teaspoons, and it works just as well with dry ingredients and liquids.  So you’ll never need to use the ‘whoops, my hand slipped’ excuse again… unless it’s whisky and you’re feeding Mary Berry. 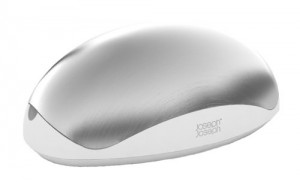 There’s a reason Joseph Joseph products find their way into so many swish kitchens, and it’s not just because they work well. This beautifully ergonomic ‘Shell’ is probably the most attractive set of scales we’ve ever seen. It’s clever, too – the sleek lid lifts off to become the upturned measuring bowl, and its ‘add and weigh’ function allows you to measure multiple ingredients at once without challenging your GCSE maths skills. It’s pricey, yes, but think of all the money you’ll save on failed cakes. 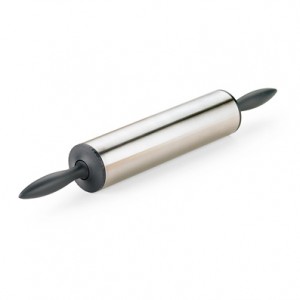 Bake Off fans will all be more than aware of how important it is to keep your pastry cool before baking. It’s one of the first things we learn after ‘soggy bottoms’ and ‘don’t let Mel and Sue eat your ingredients’. But if it’s a hot day or you’re the sweaty-palmed type? Technology is at hand to help, in the form of Cuisipro’s Stay Cool rolling pin – just fill it with cold water and it will reduce the temperature of the metal by up to 11°C, without any condensation getting into your dough. The weight of the water also makes for smoother, easier rolling, while the stainless steel surface is naturally non-stick. 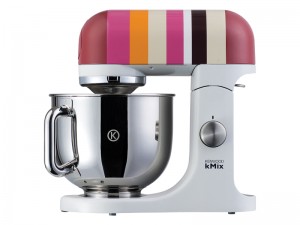 Best for giving your wrist a rest: Stand Mixer

As surely as they combine your butter, sugar and flour, stand mixers also divide the baking community. Some say the iconic KitchenAid is the only way to go, but every brand has their devotees. Food blogger Ashley from Peach Trees and Bumblebees favours this gloriously stripy Kenwood kMix, while She Cooks She Eats’ Amy swears by her Sage by Heston Blumenthal Scrape Mixer: ‘it weighs the ingredients and calculates exactly how much force needs to be applied to the mix. Genius’. Whichever you go for, it’s an investment that will keep you in light, fluffy cake and lovely loaves for years.