We all know that Instagram can be so addictive, using photos to get a glimpse into the lives of complete strangers, and nine out of 10 times making you extremely jealous that you’re not eating that massive burger and chips. sitting on a beach or sipping on those gorgeous looking cocktails – and that’s just the non-celebrities. The celebrity-owned Instagram accounts are double-jealousy inducing.

While most are just impersonal red carpet photos or self-promotion for their album or film, we’ve chosen our top 10 celebrity Instagram accounts, who love to show off what’s happening in their daily life, like cooking or chilling out with their pets/friends, showing that they can be normal too – just with a lot more money. 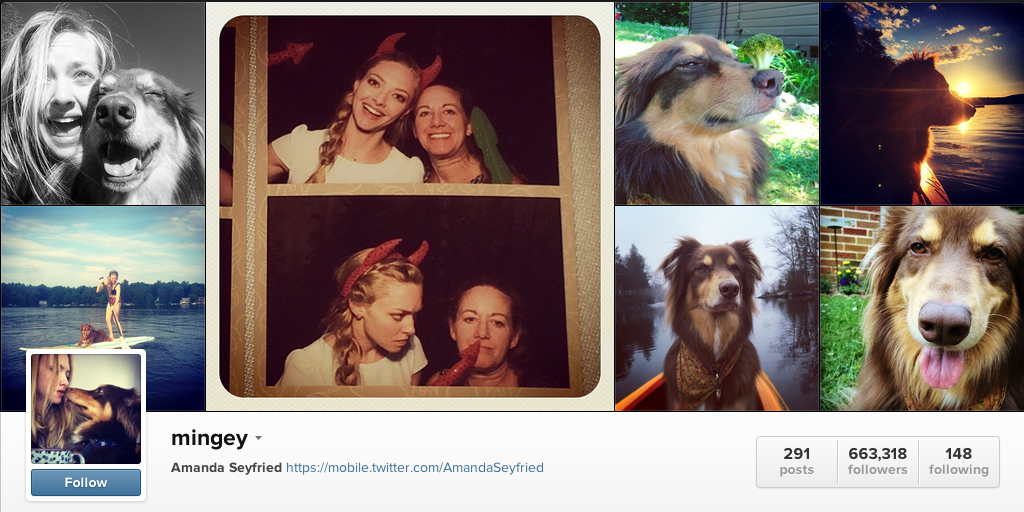 So, it turns out Amanda Seyfried loves taking pictures of her dog as much as we do. Nearly every single Instagram happens to be a dog selfie (delfie?), or include her dog in some way – our kind of girl. There’s the odd snap of a glam holiday (but don’t we all do that?) or her just hanging out with fellow celebs, as her boyfriend just happens to be Justin Long, but for the most part, it’s just obvious how normal she is and how much love she has for her dog. Also, we sort of love her just for having ‘Minge’ tattooed on her foot. 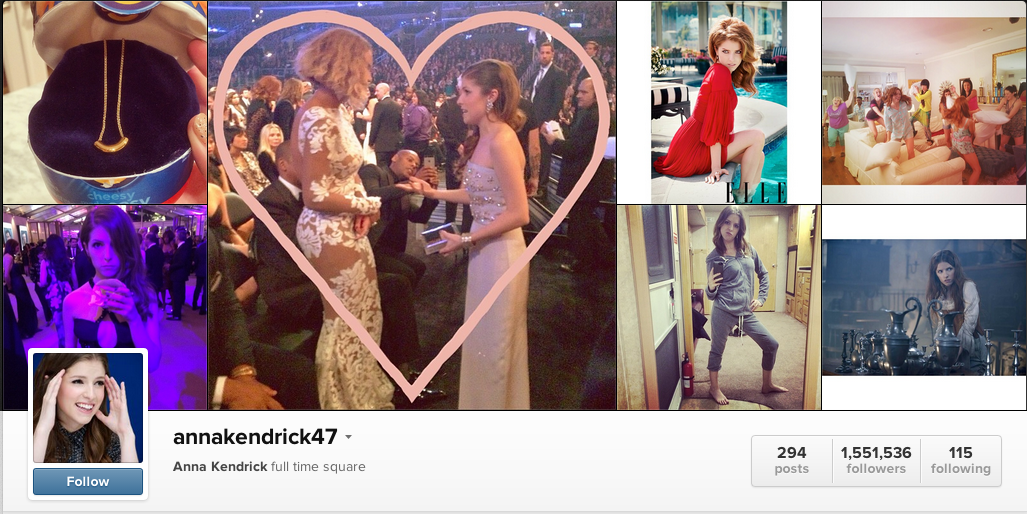 Ok, so we sort of fell in love with Anna Kendrick after watching Pitch Perfect. Her tweets are always SO on point – if you don’t follow her, you really should – and her snaps on Instagram are just as relatable. Her post of her meeting/fangirling over Beyonce with a heart drawn around it is exactly what we’d all be like if we met Queen Bey. Ok, yes, so there are also pictures of her in photoshoots for Elle and red carpet pap shots, but the pictures of her hanging out with her Pitch Perfect pals backstage, and a snap of her accidentally wearing the same jacket as her best friend are what make her Instagram worth a follow. 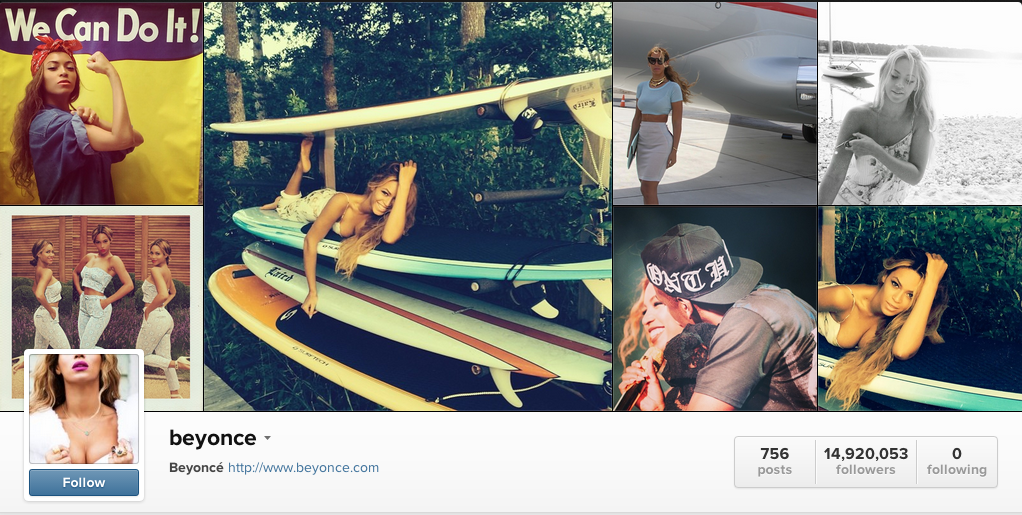 And speaking of Queen Bey, she’s made the list too, not so much for being relatable, but more for just being Beyonce. No, her account isn’t relatable in the slightest, seeing as every picture is just of her looking incredible, and, more recently, pictures of her and Jay Z looking all loved up on and offstage with their daughter Blue, in a bid to demolish rumours that they’re about to split up (which we’re devastated about). 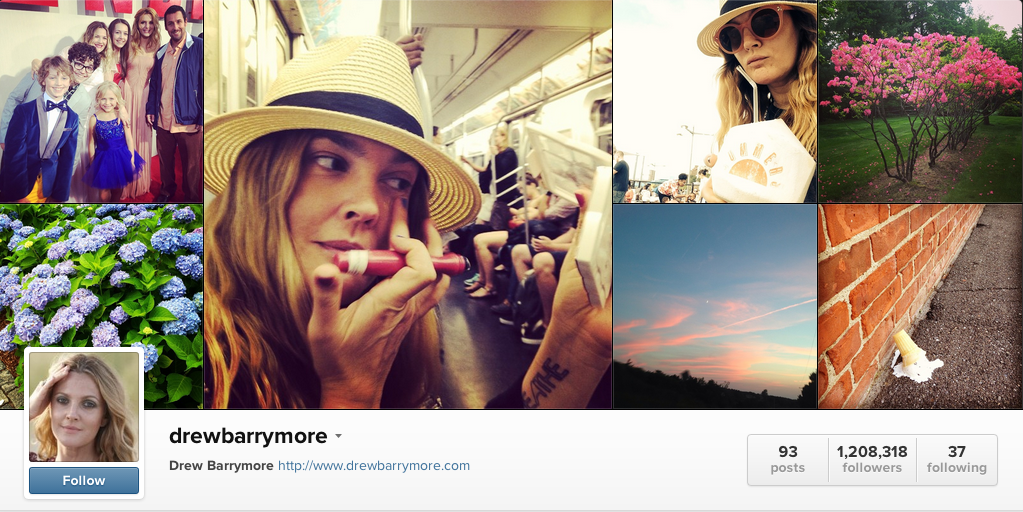 Drew Barrymore had to be on this list, as she’s in some of our favourite films (50 First Dates, Ever After, Never Been Kissed anyone?), and seems like she’d be the same in real life, especially from the various Instagrams of her doing her make-up on the subway (SO NORMAL!)! Other everyday activities for Drew include cooking, drinking and dogs, so she’s easily one of us. Also, there are loads of pictures of her just hanging out with Adam Sandler – our favourite onscreen couple of all time…maybe. 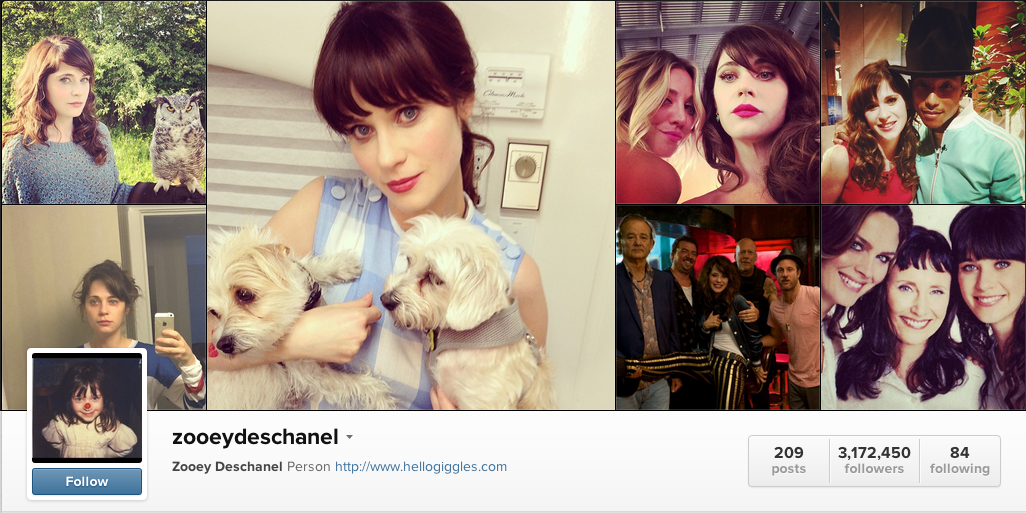 Our favourite kooky New Girl is just as kooky on Instagram as she is on her TV programme. Posting random pictures of her looking serious with an owl, a blue face, and other things, as well as much-needed backstage pictures of her and her fellow New Girl cast members, she manages to constantly keep us interested. Also, she posted a picture of herself without any make-up on three months ago, and what other celeb does that?

Want to see which other celebs are a must-follow on Instagram? Continue on to part two here.