With so many chat apps out there, it’s hard to differentiate between them and decide which is the best one for you. There’s obviously the messaging giants like Facebook Messenger and Whatsapp (which has also been acquired by Facebook, and, thus, Facebook is taking over the world) but there are so many others that may be better for you to use to keep in contact with friends, like Line, Snapchat and the newest phenomenon that is Meow Chat.

But why are they so popular?

Obviously privacy is a massive factor with messaging apps. In contrast to Facebook and Twitter, where we post our lives for all to see, we use chat apps to tell only certain friends something we want them to know. They’re basically used as a much quicker form of texting, and the fact that you can see when the person you’re trying to get hold of has read your message is a massive factor in choosing instant messaging over text. It definitely gets rid of the paranoia of wondering whether that guy is ignoring you or he just hasn’t seen your text!

Here’s our rundown of our 10 favourite chat apps, and why there is definitely reason to be using more than one of them for different moments in your life! 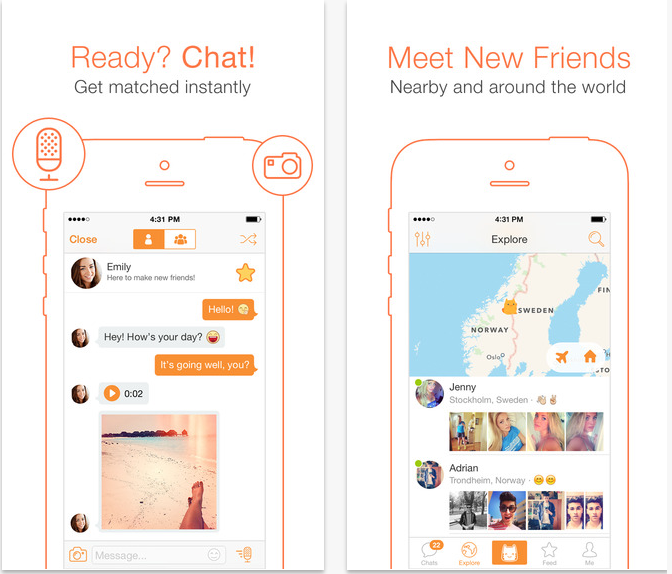 Meow Chat has all the standard features of an instant messaging app, but this one has a ‘Random Chat’ feature, where you can speak to anyone around the world, much like Chat Roulette (remember that?), but also matches you with people with similar interests to you, rather than just by distance. So, this app is essentially a dating app as well as a chat app.

There is also an ‘Explore’ feature to see what people nearby are up to and see their pictures, which you can like or comment on.

You link up Meow Chat with your Facebook profile and then, voila, you can chat to existing friends by inviting them to join or find new buddies around the world. Annoying however, you can only use the app if you send out invites to all your Facebook friends.

At its most basic level, the app connects you to random people based on geography. Although, the New York developers, Minus, say that the more you tell the app about yourself by filling in your profile with interests and hobbies, the better the chances of you matching with people you might actually want to chat to!

Meow Chat claims to be the ‘fastest growing social network with millions of members from every country’, and its Google Play page states that it has been downloaded between 5 million and 10 million times for Android alone.

Judging by the short bios some users have written (‘no nudes plz’; ‘don’t message me if your [sic] 50’) , this feature can be a magnet for creeps – worrying considering the app has a minimum age of 13, and also has the option to hide your age.

The app is free to download from the App Store  and Google Play. 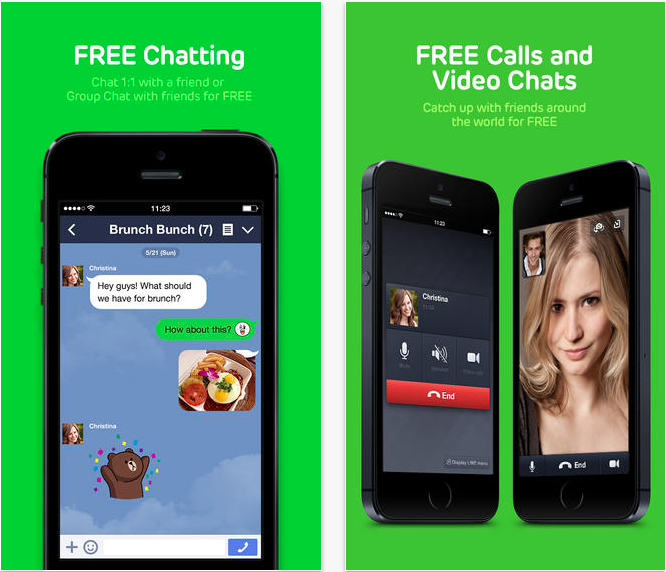 Much like Skype and Viber, LINE allows you to make unlimited video calls and message using your data allowance (read WiFi, if you aren’t lucky enough to have unlimited data), but, as well as the messaging side of LINE, the app also has a Timeline feature, where you can update your friends about what you’ve been doing lately, using photos, movies, stickers and location information.

The stickers seem to be LINE’s version of emojis, and contain a choice of famous characters from all over the world, including Spongebob Squarepants and the minions from Despicable Me.

In the last update, clearly taking inspiration from popular app Snapchat, LINE added ‘Hidden Chats’, allowing users to send messages to each other that can be automatically deleted after a predetermined amount of time.

When you download LINE, you’ll have the option to automatically add your contacts through the emails and phone numbers stored on your phone. You can then add more contacts through manually typing in their email or phone number, or, if you’re in close proximity to the person you want to add, you can even shake your phones at the same time and you’re suddenly LINE contacts!

The app was created in summer 2011 as a communication system for NHN Japan employees, but it then saw explosive growth when released to the public in June of that year, and it was announced in April earlier this year, that the instant messaging app has now reached over 400 million users worldwide.

LINE can be downloaded for free from the App Store  or Google Play. 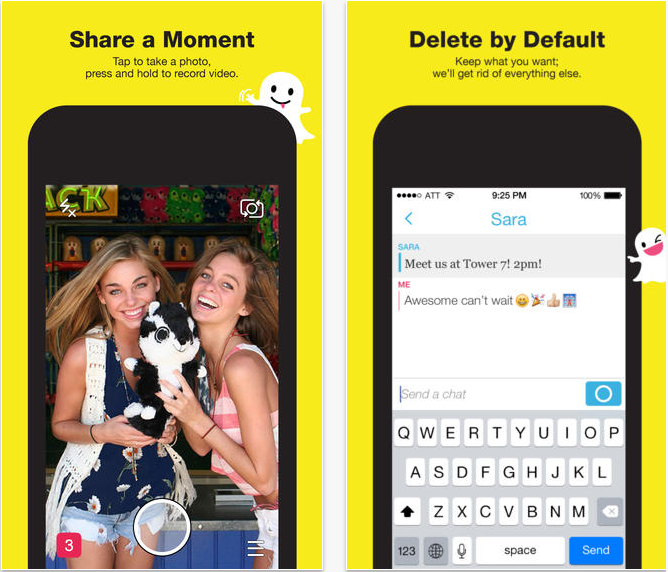 Snapchat is one of the hottest mobile messaging apps, and has been ridiculously fast-growing. Launched in 2011, the app allows you to instant message with friends through photos, drawings and videos.

Unlike other messaging apps, you can view snaps for a maximum of 10 seconds, and then it’s gone for good. This is the same for any messages you send to each other too.

There’s also a ‘My Story’ section, where users can put lots of photos together, for any of their contacts to see, for 24 hours. This section is getting used more and more by brands too, like Hollyoaks and MTV.

Once you download Snapchat, you can add all your phone contacts who also have Snapchat, and you can then immediately start sending ugly selfies to your most trustworthy friends (beware, they can still screenshot your picture!).

The ‘My Story’ section also means that it’s possible to subtly show off about all those festivals and fun nights out you go on, by posting tons of pictures for everyone to see.

Snapchat’s main demographic consists of users between 13 and 23 years of age, but there are definitely some older users sending selfies too.

You can download Snapchat for free from the App Store  or Google Play. 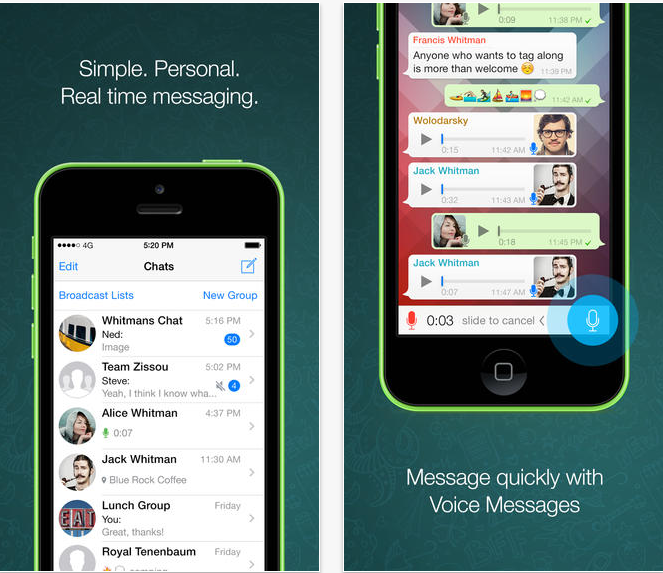 WhatsApp is really just your average instant messaging service, but it’s the first one most people started using once Blackberries started becoming a thing of the past. It has everything you could want from a messaging app, including knowing if your friend’s seen your message or not, the ability to send photos and videos, and, best of all, nearly all your contacts (presumably).

Once WhatsApp is downloaded, it automatically adds all the contacts from your phone who also have WhatsApp downloaded, and automatically lets you message them. Of course, there’s also the option to use group chat, which is great for discussing bills and house issues with your flatmates.

In a December 2013 blog post, WhatsApp claimed that 400 million active users use the service each month. As of 22 April 2014, WhatsApp had over 500 million monthly active users, 700 million photos and 100 million videos are shared each day, and the messaging system handles more than 10 billion messages each day.

WhatsApp is free to download from the App Store and Google Play. 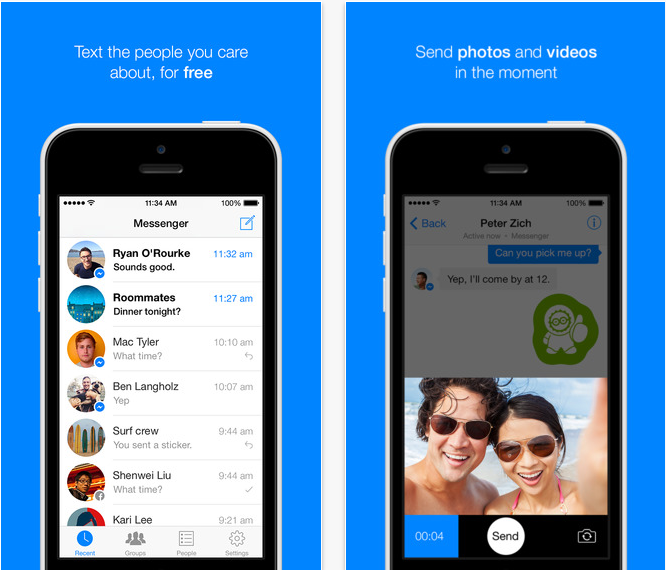 It’s basically like all the other chat apps, except it pulls in your Facebook friends, and only allows you to chat to them. It has all the features you’d expect from instant messaging, including group messaging and the ability to see whether your message has been read, but there’s also a voice call feature.

Once Facebook Messenger is downloaded, you’ll see all your Facebook friends on the app. It works alongside the chat feature on the desktop version of Facebook too, so you have the ability to switch between the two constantly if need be.

In April 2014, Facebook announced that the messaging feature will be removed from the main Facebook app with users forced to download Messenger, so we’re assuming all Facebook users now have it, unless they’re being very stubborn!

Want to find out what the rest of our favourite instant messaging apps are? Keep reading for part 2 here.