The trend for releasing a smaller, more budget-friendly version of a flagship phone continues with the confusingly named HTC One Mini 2, which is to the One M8 what the One Mini was to the original One. Yes, this is a hugely confusing situation, and it’s not helped by the fact that the M8 and Mini 2 look extremely similar, don’t differ much in size, and yet behave like completely different phones. 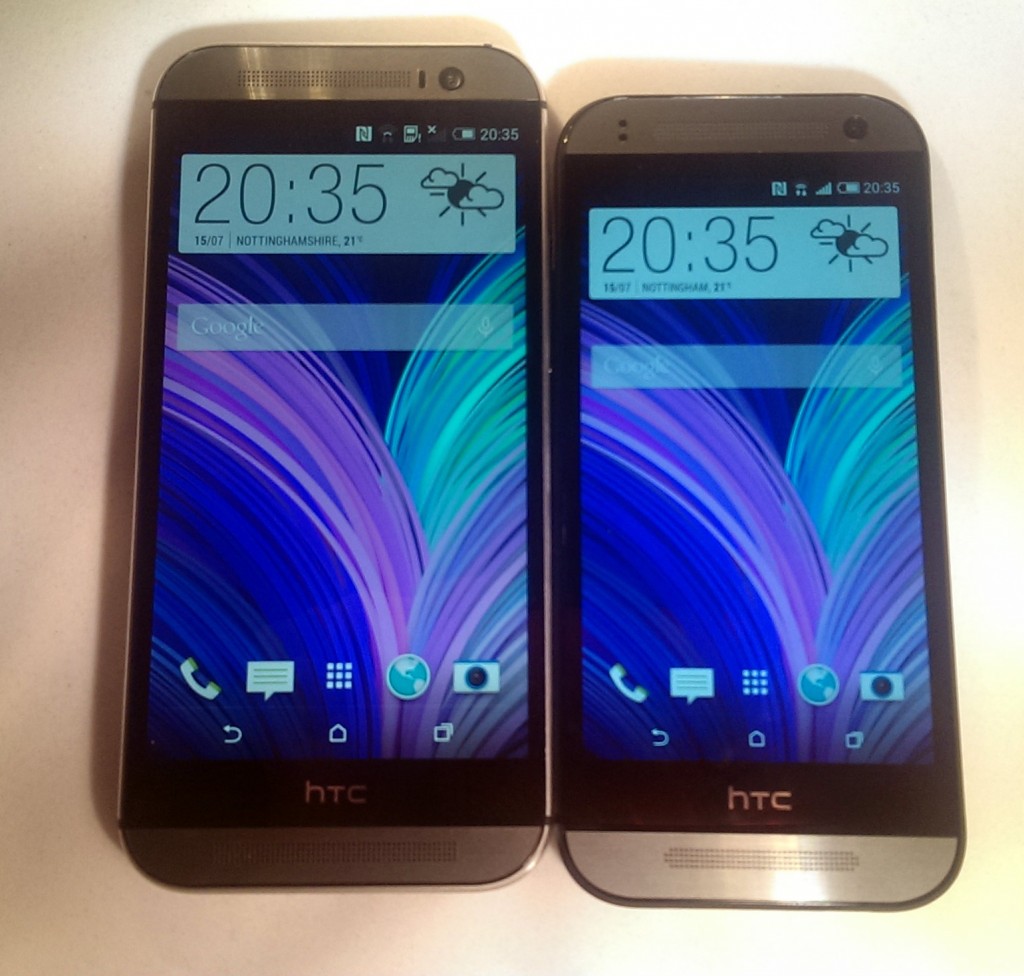 You could be forgiven for mistaking the Mini 2 for the full-size M8, because they look almost identical and the Mini 2 isn’t mini at all. It has a 4.5 inch screen, which is half a (diagonal) inch smaller than the M8’s, and actually half an inch bigger than the iPhone 5’s. In other words, what HTC calls mini, the rest of the world calls an average-sized smartphone.

All the high-end aesthetics of the M8 have been carried across to the Mini 2, with the same brushed aluminium finish available in grey, silver and gold. The Mini 2 uses less metal in its casing (70% rather than 90%), with a plastic surround that’s barely noticeable and contributes to the much lower weight of the phone.

In fact, it might be a little too light. The very curved, very smooth back feels secure-ish in your hand when combined with the weighty chassis of the M8, but the skinny version feels like holding a bar of soap. I’m not at all confident that it won’t make a sudden break for freedom in the middle of a crucial Facebook status update. 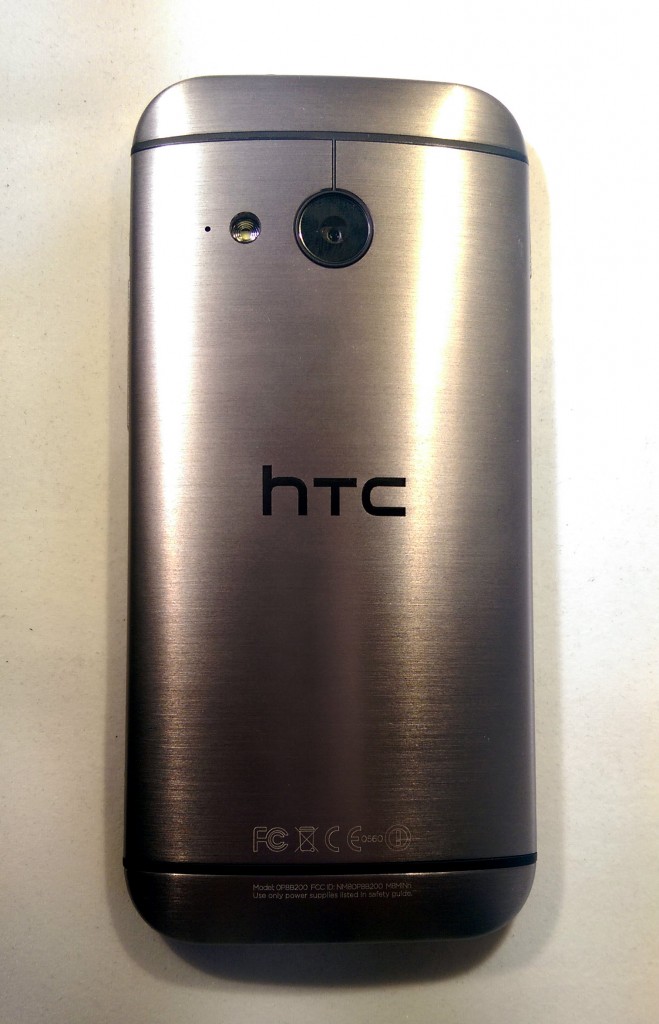 Bafflingly, HTC refer to this phone as “the most grippable Android ever”, which is presumably only true if you cover it in double-sided sellotape. Nonetheless, this is a very expensive-looking handset, which is impressive given that it’s not actually expensive, at least compared to the M8. Most of the cost savings have unsurprisingly come from hardware choices, with no dual camera, a lower-resolution screen, and a Qualcomm® Snapdragon™ 400 quad-core processor in place of the M8’s quad-core Snapdragon 801. The MicroSD expandable storage option has sensibly stayed, giving you the option to upgrade the phone’s somewhat meagre 16GB offering by up to 128GB.

The Mini 2 takes a nano SIM, as does its brother, but blessedly the more annoying hardware choices on the M8 have not been replicated: the power button is on the left as it was with the M7, and the headphone jack is back where it should be – at the top.

The Mini 2 comes with Sense 6, HTC’s flatter and more colourful skin for Android KitKat. Included with Sense 6 is HTC Blinkfeed, an attempt at a social dashboard that pulls in feeds from selected social networks, news outlets and other HTC-curated sources. I’ve never found Blinkfeed particularly useful, so the option with Sense 6 to turn it off entirely is appreciated, but some people are apparently big fans. If you can wade through the various permissions and configurations of the initial setup, you might grow to love it, but it’ll take you a while.

Some elements of the Sense interface – particularly the status bar notifications and on-screen keyboard – feel a bit cramped if you’re used to a larger phone, but if you’re coming from a similarly-sized handset, you probably won’t notice. I did feel a bit fat-fingered trying to type on the Mini 2 after getting used to the M8, though.

The three main buttons on the handset have again been relegated to software-only, where the M7 had two capacitive buttons on either side of the logo. This is a big push in Android KitKat, so it’s an understandable choice, but I find software buttons frustrating in that you often have to tap the screen to see the buttons before you can tap the buttons themselves. It’s not a great user experience.

Due to the lower price of the Mini 2, many of the motion sensors of the M8 have been sacrificed, which means that sadly the Motion Launch gestures (like lifting the phone and double-tapping to unlock the screen) have been lost. Similarly, there is no Dot View case for the Mini 2, so for the money you save, you lose a lot of cool factor.

You also lose a fair slice of performance. The weaker processor shows when launching or switching between apps, particularly power-hungry ones, which showed lag and stuttering at times. The metal case also warmed up a fair bit when the hardware was pushed – not to any worrying degree, but enough to notice.

One M8 feature that thankfully hasn’t been lost is the excellent BoomSound front-facing speaker set. These are absolute stonkers and produce music that’s almost uncomfortably loud for personal listening (though not loud enough for a rave). It’s great to see that the Beats hardware of the M7 and original Mini has been replaced with something even better – and the loss of the ugly Beats logo on the back of the phone is a bonus, too.

The 4.5-inch Mini 2 screen is a step down from the M8’s, resolution-wise – it delivers 1280×720 rather than the M8’s full 1080. Maybe my eyes aren’t HD enough, but I can’t really tell the difference in terms of clarity or quality, even when watching films.

I did notice that the screen is darker than the M8’s, and just a bit too dark in general. Its brightest setting is just… not that bright. Action films looked gloomy at times, although the range of viewing angles is good. It’s also usable in bright sunlight on the highest setting – just not with your sunglasses on. 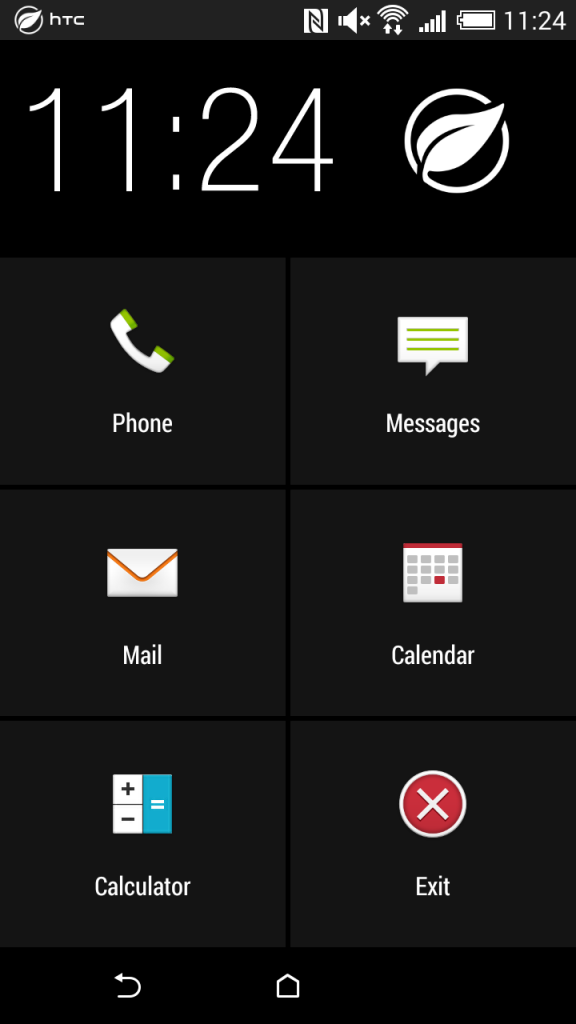 The display is made from Gorilla glass, which is always reassuring, but doubly so with a handset as slippery as this.

Colours are bright and accurate, and on the whole it’s a perfectly good display for a phone this size and price – it just pales in comparison with the M8. And that’s this phone’s entire problem. 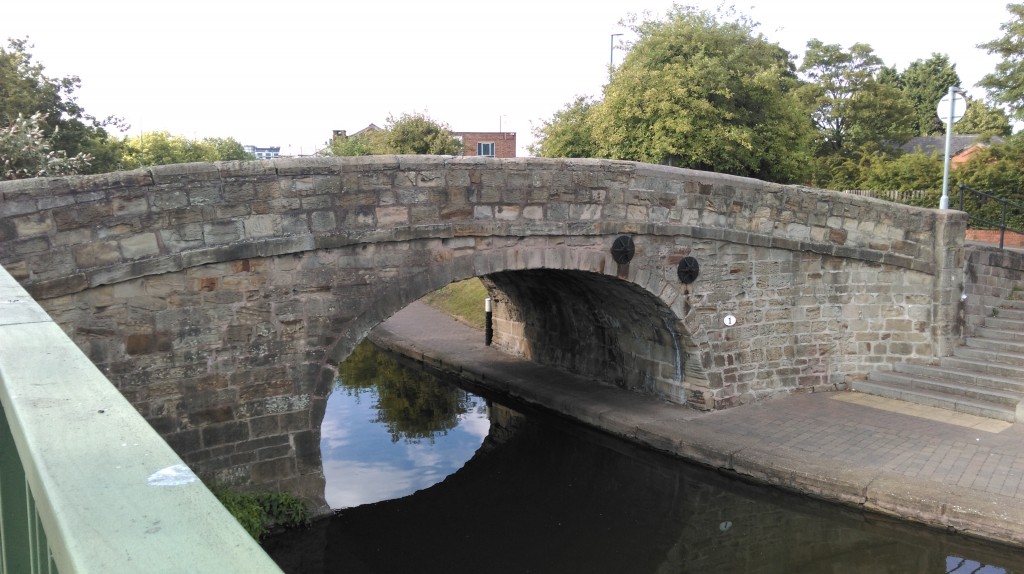 In a surprise move, HTC has chosen to drop the UltraPixel sensor they’ve been relentlessly pushing on other models – including the M8 – and build in a standard 13MP snapper to the Mini 2. It performs very well in normal conditions, but the lesser sensor becomes painfully apparent in low-light conditions where the M8 would excel. It’s also lost the dual camera setup, which is one of the M8’s big sells: the post-processing features like retroactively changing the focus of a photo and creating 3D effects have all gone. So, too, has the full Zoe camera, although you can still combine photos and clips into the effects-laden montages that HTC is so fond of.

The ‘selfie’ camera (yes, that’s actually what Sense 6 calls this mode) is a standard 5MP and works averagely well. Nothing remarkable here except some ill-advised effects: Face Contour, which lets you slim down your jawline, Eye Enhancer for giving yourself anime eyeballs, and – disappointingly – a ‘Make up level’ slider that you can use to make yourself look worse. You can apply these effects unlimited times, so keep going and you can turn yourself into a pretty convincing alien. 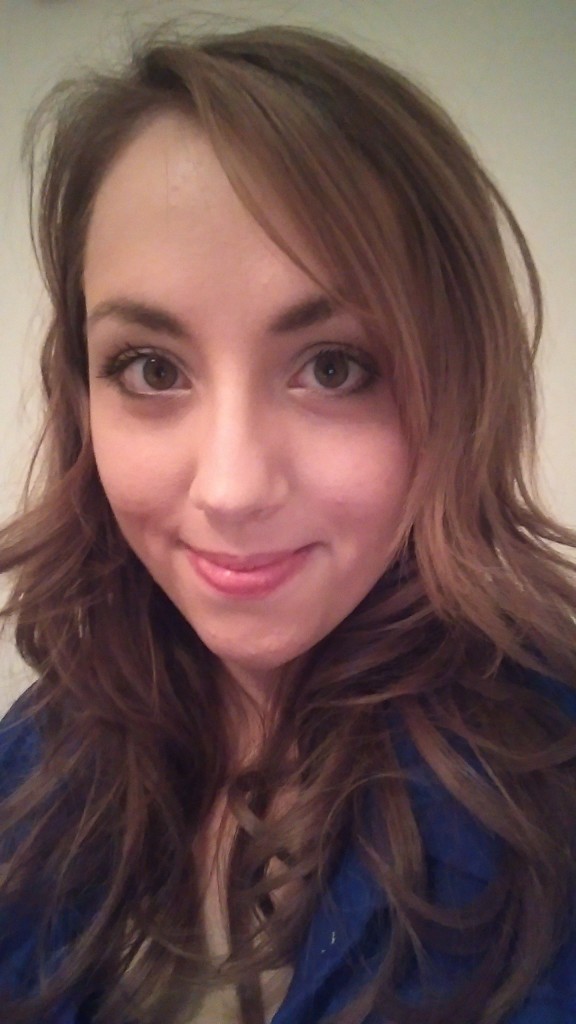 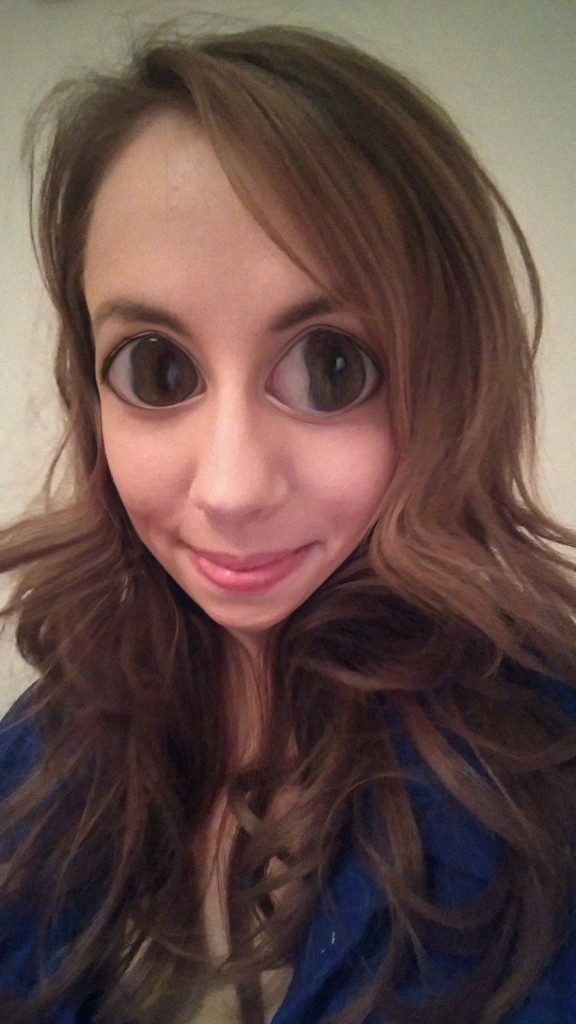 HTC have done the right thing and boosted the battery power for the One Mini 2 to 2100 mAh, from the original One Mini’s 1800. This is probably in response to user feedback in the year or so between the two phones, and to be more in line with the M8’s high-performing 2600 mAh. This is one of the many ways that the Mini 2 resembles the M7 more than the M8, with the former packing a 2300 mAh battery, almost identical dimensions, and comparable hardware. Given that that One M7 is still very much available – and at a similar price point to the Mini 2 (there’s only a tenner in it from some retailers) – it’s hard to imagine why you’d choose a Mini 2 over the more muscular M7.

The Mini 2 includes Sense 6’s new Extreme Power Saving function, which hobbles your phone to the extent that you can only use it for ‘essential’ functions: calls, texts, and the stock email, calendar and calculator apps. The phone screen is entirely taken up with a six-button menu and there’s no way of accessing the app drawer or home screens until you turn off this mode. The usual battery-saving functions like reducing screen brightness, turning off vibration, and cutting data when the screen’s off are in there too, which means that although your phone won’t be able to do much, it’ll stay awake a lot longer.

As with the rest of the One range, the Mini 2 battery isn’t accessible or replaceable. This was more of an annoyance on previous models, but it’s now pretty clear that this is the way HTC intends to go for future handsets. It’s also less of a problem because the beefier battery lasts the day very well, so you’re less likely to need a spare. After two hours streaming a fullscreen film over Wi-Fi with BoomSound and maximum screen brightness, power dropped from 100% to 65%. In the same test, the M8 dropped to 66%, suggesting HTC has chosen the right size battery to power the Mini 2’s less-demanding hardware. The phone easily lasts through the day at normal usage levels, and I haven’t had to use my portable charger at all with this handset.

Holly reviews the HTC One Mini 2 in more detail, in the video below.

Taken alone, this is a beautiful and very usable phone with some great features and solid hardware. But it’s not taken alone. It sits in the shadow of one of the most-loved phones of recent years, so comparisons are inevitable – and it comes up short in almost every way. The features that have been cut are some of the M8’s best points of difference, and considering the impact of having a current-generation One without any of the cool stuff, a saving of around £200 just isn’t enough to make this an appealing choice.