Facebook announced today that its UK users will be allowed to choose from over 70 different gender options when inputting their profile information.

Under the ‘custom’ category, UK users can now select options such as ‘androgynous’, ‘cis male’, or ‘trans female’. There are also UK-specific terms, including ‘intersex man’, ‘asexual’ and ‘hermaphrodite’. The super inclusive move comes after the US version of the social networking site initiated the extensive list back in February. 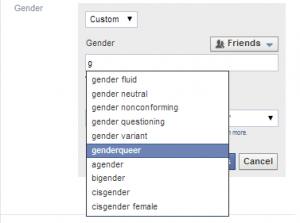 The introduction of this huge array of preferences on the popular social network – did you know that as of August 2013, Facebook had 1.23 billion active monthly members?! – is symptomatic of a shift in social attitudes in the West. Although picking a gender is not actually a requirement on Facebook, providing options outside of accepted gender binaries affords users greater freedoms when self-identifying. In turn, this contributes towards a greater understanding for all and exposure of gender fluidity.

In much the same way as you can control your profile and photo privacy, users will also be able to decide who gets to view their gender – as well as which pronoun they prefer. 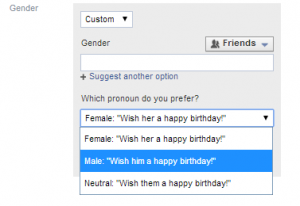 Speaking to the Independent, Facebook’s policy director in the UK, Simon Milne, commented:

‘It’s all about Facebook enabling people to be themselves, and making users feel comfortable in how they express themselves and how they talk about the issues that matter to them.’

Facebook has been working with two UK organisations, Gendered Intelligence and Press for Change, to implement the new options.

The move will also pave the way for new marketing opportunities, since there’s currently no way to target people with the ‘custom’ gender identity.