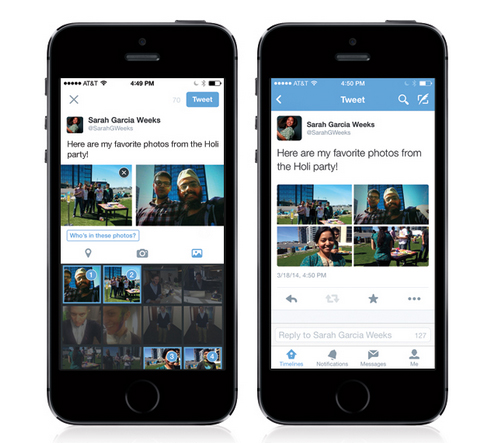 Over the past few weeks everyone’s been talking about the rumours that Twitter could soon phase out some of its most popular features, like the hash tag (oh dear) and the @ reply (say it isn’t so?). But in a post published yesterday on the Twitter blog, César Puerta, a Software Engineer, explained it’s Twitter’s photos that’ll be getting a more immediate revamp.

The first big change is tagging. You can now upload a photo to Twitter and tag up to ten users in that photo without it affecting your character count. So add a photo, tag up to ten little faces and still have 140 characters to play around with after.

The other new feature is that you can now add up to four photos and upload them all to a single tweet. They’re displayed in a little grid, which allows you to click one, view it, and then scroll through the rest. Users on all platforms will see these multiple photo tweets today, but only those with iOS devices will be able to upload them for the time being.

Puerta explains that the move to integrate more photo features into Twitter is to make it “more social” and with more photos than ever before and tagging options akin to those on Facebook and Instagram, it certainly looks like the micro-blogging platform is bolstering its efforts to tear us away from its competitors.