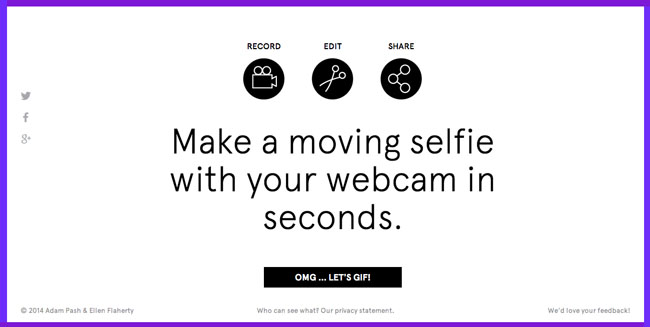 We know, we know, GIFs are just so 2012, but there’s something about those quick moving, poor quality little nuggets of pop culture that just make them irresistible to share – even if our grans are now sending them to one another.

There’s no shortage of sites that allow you to create your own GIFs, but there’s nothing quite like And Then I Was Like, because it’s so simple and it’s all about you, you, you – a winning formula these days.

All you have to do is hit “OMG… LET’S GIF”, press the record button and then save your masterpiece. There are some really simple editing options – like adding in a caption or changing the direction of the loop – but that’s pretty much it. You can then share away via Twitter, Facebook or Google+ or even embed your little video wherever you like.

The idea behind And Then I Was Like is that yes, we all bloody love GIFs, but we seem to be sharing the same ones (Tina Fey, Nicholas Cage and Mean Girls are my personal faves) over and over and over. So why not create something individual that has our faces in them instead?

Of course this defeats the whole point of a GIF – aren’t they meant to be of US actors and comedians and dumb regular people who have walked into things? Maybe. But as selfie fever well and truly takes over the globe, here at Shiny Shiny we’re pretty sure that And Then I was Like’s unique brand of fun and shameless narcissism could well catch on.

Related: Coub: Move over GIF there’s a new guy in town and he’s much better looking