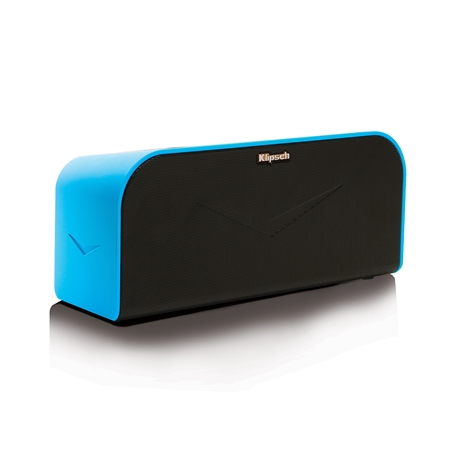 Not that long ago Klipsch released the KMC 3. A serious contender for wireless boom box of last year, it boasts a huge amount of power for a smallish box and is perfect for people who want a mini speaker they can move around the house.

Now the company has unveiled the KMC1 which has much in common with the 3, but is notably smaller. The 1 can still work as a home based system but I guess that its prime role is for travellers who want something that is going to deliver a great sonic performance but is small enough to fit into suitcase.

The only downside is that the KMC1 is pretty hefty. Put this another way you’ll know you are carrying it.

However don’t let that put you off as the KMC 1 is a really rather lovely piece of hi-fi. First up it looks the part. Klipsch have gone for a fairly traditional understated design. If you want something a bit more flash it is also available in white, blue (pictured), purple and plenty of other colours, but the black is fine. It looks like a speaker and there probably isn’t a lot wrong with that.

In terms of connectivity there are several options. The wireless offering for smartphones is Bluetooth and usefully the Klipsch remembers the last eight devices that it was paired with. It also works with a wired connection through a small phono if you prefer. Another plus is that it sports a USB which you can use to power/charge smartphones – a real boon if you are on the move. On board is a Lithium Ion battery that Klipsch claims gives around sixteen hours of power. In testing it fell a little short but it was still capable of a good innings

The key for the KMC 1 though is its performance. You are only going pay a fairly sizeable amount, up to £250 in this instance, for speakers that deliver an exceptional sonic performance. Fortunately the KMC 1 more than delivers. It is pretty muscular for a speaker of its size blasting out 2x10W RMS 40W through its speakers. Crucially, and this is where it scores heaviest over its rivals, there’s plenty of bass too courtesy of a 3inch dedicated bass driver. The overall sound is crisp and clear. It works well on low volumes too which might be useful for listening to speech based sound like podcasts.

Crank it up though and it delivers a very punchy sound with lots of bottom-end. It is a party animal for those who want music on the go.

As I mentioned earlier its retail price is around £250, thought it can be bought for a little less if you shop around. From around the same price you can also buy the Loewe Speaker 2go which is a striking looking speaker. Also the Samsung DA-F60 which comes in around £100 or so cheaper.