Intriguing news from Product Reviews, who reckon that Apple are busy cooking up an even bigger iPad – this time with a 12.9″ screen. 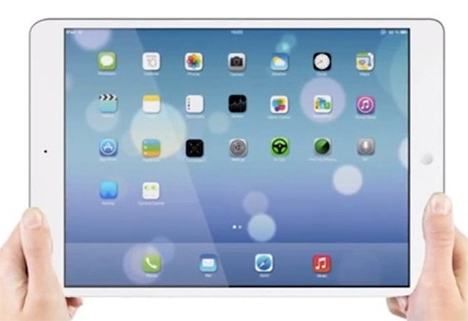 The iPad Pro, as they claim it would be known would be two inches larger than the 10.9″ iPad Air, and nearly twice the size of the relatively new iPad Mini, which clocks in at 7″.

The speculation has been prompted following reports that Apple are considering also increasing the screensize on the iPhone 6. It seems as though someone at Apple is a little size-conscious after checking out one of the many 5-6″ phablets that are available running Android, like the Galaxy Note 3, or the beautiful but limited Nokia Lumia 1250.

The story on Product Reviews claims that “Most of the rumors suggest that an imminent iPad Pro launch is very likely, although when we say imminent, we mean some time this year”, but we’re going to take that with an enormous grain of salt – this is the first that we’ve heard.

If Apple did go for a jumbo option, it would be no means be the first 12.9″ tablet. A number of manufacturers have already produced such devices running Android – though none of the big players (the Samsungs and HTCs of this world) have done anything yet.

Of all of the Android tablets, the most well known is probably the HANSpress HANDSpad – which is a 1.6ghz Android device with a 12″ screen. Though I guess back just before the original iPad launched commentators were pointing out that nobody series had tried doing a tablet either.

The other thing counting against these rumours is when you think about it from Apple’s point of view. At the moment they have to produce apps that work for four different screen sizes: iPhone 1-4S, iPhone 5, iPad Mini and normal iPad – will they really want to fragment things further and insist on developers building apps for their platforms on two more screen sizes (iPhone 6, iPad Pro) in addition to this? Won’t they face the same sort of fragmentation that Android struggles with?

We’ll keep you updated with any more MASSIVE NEWS (literally) when we hear it.

One thought on “Is Apple planning a MASSIVE iPAD?”