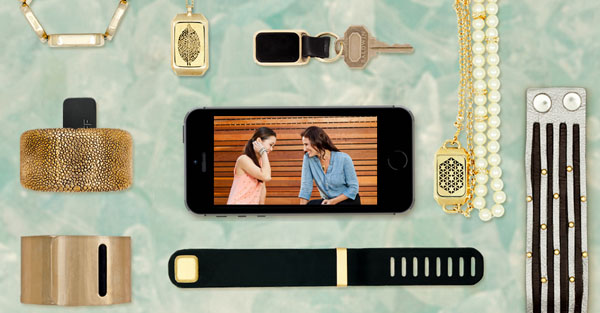 Exciting new startup Cuff and its range of sparkly accessories proves that personal security systems have come a long way since the days of bulky rape alarms.

Cuff consists of three different things, the CuffLinc, which is the Bluetooth brains behind the whole system, Cuff jewellery and the Cuff iOS app.

The idea is that people will slot the CuffLinc into their Cuff jewellery (there’s a special little slot for it), then if they have a medical or safety or any other kind of emergency, they’ll press the device and a circle of friends will be alerted via a vibration to their own Cuff or a push notification to their phone through the dedicated app.

Cuff describes its CuffLinc and jewellery as a “security” device, but although there’s a rather ominous video on its website complete with predators lurking in shadows and under bridges, it could also be useful for those with health problems to alert friends and relatives about any medical emergencies.

In fact, you can also send a smaller “hey you” vibration as apposed to the big scary “I’m in a huge emergency” vibration, which seems to be geared up for people trying to reach a friend or relative when they’re away from their phone.

Cuff is certain the CuffLinc is fully waterproof and will never need to be charged, meaning it’s effective 24/7 – as long as you wear it that is. And that’s the huge question here, will anyone actually wear one of these things?

If you cast your eye over all of the Cuff jewellery collection it’s a little OTT and glitzy, but each piece actually looks quite understated and classic when it’s on its own. Interestingly, Cuff also plans on releasing its technology to designers and third party retailers, so they can incorporate it into more of their own products and hopefully reach an even wider target audience.

It’ll be interesting to see whether Cuff develops its technology further down the line in order to compete with other popular wearables currently on the market, branching away from a sole focus on security and instead into health and fitness tracking.

The Cuff jewellery will be shipped later in the year, but is available to pre-order now with prices ranging from $50 to $150 from its US site.