Finally the greatest mystery of all has been solved! I’m talking of course, about the case of the ambiguous phones. One fan of the BBC’s Sherlock reboot has finally figured out what phones all of the main cast of the series use. Now it’s just a case of figuring out how to make them all receive the same text message at exactly the same time. 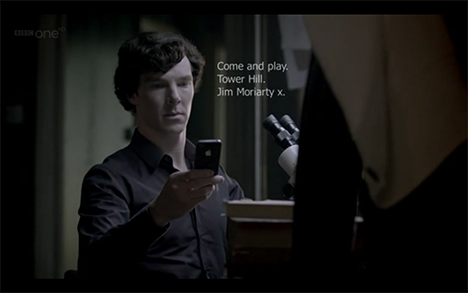 The Wear Sherlock Tumblr, a blog dedicated to identifying the wardrobe and props in the series, has the full list:

Whether or not the Homeless Network using Blackberrys and Windows Phones is a subtle satire on those platforms being… well, a bit rubbish, we’re not sure. Similarly, quite how Mycroft can get anything done on a phone with no apps we’re not sure – presumably he must get one of his minions to manage his Vines for him instead.

Like all good mysteries there is a twist: When Sherlock was on the roof of the hospital at the end of series 2, as we later found out in series 3, he was using an iPhone 5… yet the end of series 2 was broadcast in January 2012, and the iPhone 5 wasn’t released until November/December of that year. Though with a bit of deduction, we can probably assume that it’s because of a continuity mix-up when filming the start of series 3 back on the roof, rather than Sherlock having the time to switch to a prototype phone before jumping to his ‘death’.

Let’s just hope Sherlock doesn’t use Apple Maps to navigate, or those taxi rides are going to get even more expensive.