Whereas we live and breath the internet – it can be easy to forget whilst we’re instagraming our latest meal that not everyone lives online. In fact, according to the Office of National Statistics, more than 6.1 million adults over the age of 55 have never used the internet before – with over three million of that group over the age of 75. And whilst we hear about new tablets every day, there’s an intriguing new device known as Breezie which is aimed directly at the digitally disenfranchised. 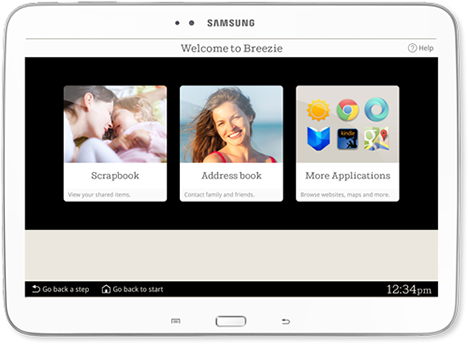 The idea is pretty simple: rather than leave Gran to sit bewildered looking at the new tablet, to offload the difficult stuff to a helpful family member. The device is ostensibly a 10″ Samsung Galaxy Tab 2 – but the difference is in the software.

As a nominated tech-savvy friend or relative, you can login remotely (from wherever you are in the world) to the Breezie “Hub”, and add or remove apps, update the address book and further customise the experience – rather than have to talk elderly relatives through how to do it over the phone. Brilliant.

Breezie have also customised the design of the software to make it more straightforward – stripping out unnecessary features and jargon to make it as easy as possible to use. Within the owner’s Breezie account (that the trusted relative can control), the owner can hook it up to Facebook and Skype – to make sure that Gran can stay in touch.

It certainly sounds like a smart solution to the digital divide but we’re forced to wonder: though it’s great that the interface will be simplified for older users, will this experience translate well to other apps? The tablet still relies on the likes of Facebook and Amazon’s Kindle App… so won’t some tasks be just as complicated as ever? Still, we applaud the efforts to reach out to the older generation – it could be a great introductory device for them.

The Breezie is available now for £329 – which is £80 more than the cost of a standard Galaxy Tab 2 10.1 (at £249) – though the price includes the first year’s service fee for access to the Breezie Hub (which costs a fiver a month after).