So, we now live in a world where not even our lightbulbs can go without being connected to the internet. Following the lead of the Phillips Hue and the “LIFX” bulb, Belkin have announced a new wifi lightbulb – and have today illuminated us with the details. 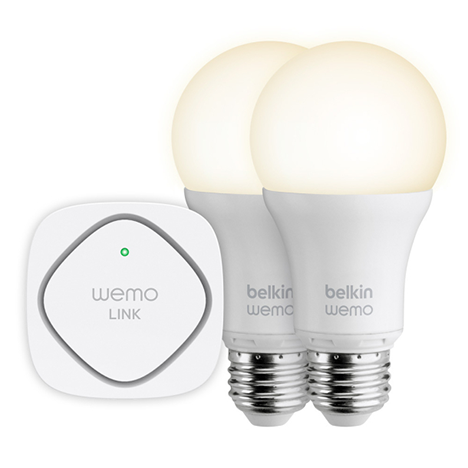 Belkin’s WeMo range has been around for a while now – and has previously connected up plug sockets to internet and motion sensing control (check out our review here). What’s cool is that in doing this, they’ve founded something of a motion-control protocol – and are slowly adding further devices that can be automated.

This latest addition, the WeMo LED Light Bulb, connects to the internet via a “WeMo Link” device that plugs into your router, which can talk to multiple bulbs simultaneously. Once you’ve established the link, you’re then able to do control the lights using the WeMo app on your phone – and also setup cleverer functionality, such as automating the time at which the lights switch on. As I mentioned in the review – one of the most exciting aspects of the WeMo system is that it integrates with Ifttt, which can set different web services to trigger other things – so you could set the lights to come on when your phone’s GPS tells Ifttt that you’re getting close to home. You could even toggle the lights with a tweet.

The lights will apparently retail in the United States for around $129 (or £80) for the starter kick containing two 60-watt equivalent bulbs (that will apparently last up to 23 years and the WeMo Link for your router – with additional bulbs costing $39 (£25ish) – which is hugely cheaper than competing wifi lighting.

Another Belkin announcement that is just as exciting is that Belkin have announced plans for the WeMo Maker Kit, which will make it easy for techie-types to hack WeMo functionality into their own devices using a DC switch – so don’t be surprised if we eventually see everything from WeMo curtains to WeMo microwaves.