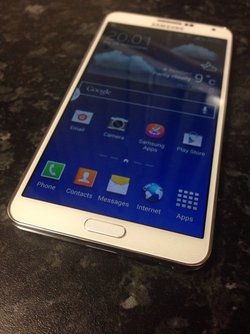 The Samsung Galaxy Note 3 combines the Note moniker’s raison d’etre for combining both the power and performance of a tablet PC, but all chucked into the slim body of a phablet. Thanks to that glorious 5.7inch screen it has been built to add delight to daily tasks such as browsing the internet, playing games and watching videos. It also sports an overall improved design and spec line-up when compared to its predecessor.

Ok, so it is big, but then again nowhere near the size of the Galaxy Mega. It measures in at 151.2 x 79.2 x 8.3 mm, which means that you could well need a suitcase to carry it in. Maybe that is a bit of an over exaggeration, because it should fit into most trouser pockets quite reasonably – but it’s definitely a large device to use as your daily driver. However, in saying that, it is a lot lighter than its competitors, weighing only 158g.

Looking at the front of the Note III, you can clearly see that it is a Samsung product due to the fact that it sports pretty much the same layout that has been used right across the Galaxy range for the last two years. The rest of the Note III’s facial is dominated by the 5.7- inch display that I have already said is large.

On the left side, you’ll find the volume rocker which I personally found very responsive, with the power on/off button located to the right that also felt extremely good to use. The top houses a 3.5mm headphone jack, with the Micro-USB placed at the bottom, alongside the loudspeaker.

The back is where you’ll find the camera sensor, but interestingly, it now offers up a faux leather look, which I found much more appealing and nicer to touch and feel when compared to other Galaxy Models that I’ve seen in the past. Some people do dislike that it’s not real leather, but it works for me.

Samsung has an excellent track record for producing gorgeous displays, and they have done it yet again with the Note III. Thanks to its 1080×1920 resolution, colours look amazing, perfect for watching a movie or two. And when I took it outside (on a nice day), I found out that it’s viable when in the sunlight – which impressed me, because when testing the Note II back in 2012, I found that it needed to improve in this area. Plus, the 5.7- inch touchscreen is nice and responsive to use.

Samsung’s TouchWiz user interface, chucked on top of Android Jelly Bean, is in my opinion, much better than the stock version and competing UIs such as HTC’s Sense. I love the whole simplicity of the UI and how sleek it is, yet sporting apps that you could arguably say are suited for people who you may call ‘tech experts’. And if you want to download more, then you can easily head over to the Google Play Store where there are thousands of options to choose from.

One of the main plus points of the Android operating system has to be the ability to personalise the whole layout. During the testing process, I haven’t once stopped fiddling with the Note III’s homescreen, constantly adding new widgets and taking old ones away. Don’t ask, but I’ve always found that a lot of fun! Perhaps it’s because I’ve been using iOS for far too long.

One of the main software features of the Note III is the ability to use the S Pen – which has been redesigned, now looking a lot better than ever before – to take down notes and draw pictures. I found the S Pen very useful when I needed to write something down and couldn’t find a pen or any paper. Some people won’t like it, but others will think it’s awesome.

I have to be honest, the Note III is probably one of the best options to go for should you want a device for entertainment purposes. Watching videos and playing games is a dream, and it has a good speaker, too.

If you pay more for a phone, then the chances are that it’s going to be impressive in terms of power and performance. The Note III is exactly that, producing amazing speeds as the result of a quad-core 2.3GHz processor, backed up with 3GB of RAM and choices of 16/32/64GB of memory. The battery life was also great, lasting a whole day and a bit on a full charge – much better than my iPhone 5.

With the Note III, you get a 13- megapixel camera and 4K video recording – a feature for Samsung to brag about, as it’s something most current smartphones/phablets don’t offer. In terms of the overall quality, I was very happy with photos taken with the Note III, although I didn’t really find the flash strong enough when using the camera in the night. However, in saying that, I had no obvious problems when it came to taking videos – the quality is quite superb – I really do mean that.

The Note III may be huge, but it’s certainly not as big as some of the phablets that you can find on the market today – using the HTC One Max as a great example – meaning that if you want a something bigger than the average smartphone, yet don’t want it to be humongous, then the Note III could be the best option to go for. This is a sound re-invention of what is fast becoming a classic device.