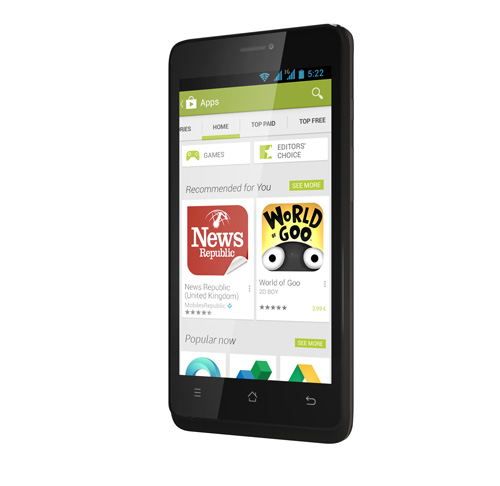 Over the years Archos has primarily been known for manufacturing and selling tablet style entertainment devices. However, this has now changed with the firm grabbing a slice of the mobile market with its very own range of Android smartphones like this budget-orientated offering, the 45 Titanium.

Interestingly the design of the 45 Titanium reminds me of the Sony Xperia T. Which, while it won’t mean that Archos scores highly for originality means that is has delievered a stylish and solid looking and feeling handset.

The front houses a, these days average for a budget smartphone, 4.5- inch display. Above that, you’ll find the speakerphone and a front-facing camera. Below the display are three touch-sensitive buttons: menu, home and back.

The left has been kept completely blank, with the right stealing the limelight with both the volume rocker and power/lock button placed next to each other. The top is where you’ll find a 3.5mm audio jack and micro-USB port for charging. Kudos to Archos for placing everything in a nice order.

Archos has done an OK-ish job with the display for the 45 Titanium, espcially bearing in minds its budget status. Its 854×480 resolution is capable of providing an overall satisfactory contrast and density for viewing photos and watching videos. Maybe blacks could be a tad darker, but every other colour seemed OK. Oh, and whites – they seem too yellow for my liking.

The 45 Titanium comes pre-loaded with Android 4.2 Jelly Bean, so sadly not Kit Kat, the latest version. That said, you do get access to all of Google’s latest services and apps, including GTalk, Gmail and of course, the Play Store.

Little customisation to the user interface has been implemented by Archos, with the handset sporting a more stock feel. This isn’t a necessarily a bad thing, but with the 45 Titanium I found everything to be too slow for my liking – which isn’t me being awkward.

The keyboard, particularly, is problematic. It seemed that I was having hassle with it
constantly: you could be typing out a perfectly short email and it wouldn’t do anything but freeze and stop altogether.

I hate slow smartphones, and the 45 Titanium is one of them, despite being powered by a 1.3GHz dual-core processor which you could argue is quite reasonable for a device of this sort of price. And to be even more negative (I’m by no means the Grinch), you only get 4GB of internal memory.

The battery life also disappointed me. After a full charge, the phone 45 Titanium barely reached three-quarters of a day – and I had only been using it for sending a few emails and browsing the net.

Archos has supplied the 45 Titanium with two cameras: a 5-megapixel rear-facing and a VGA front-facing. The rear-facing is obviously the main camera for taking photos and videos with (which is at 720p quality), though I found the quality rather poor compared to pricier models. That is often the case with budget smartphones though.

I must admit I am not too keen on the phone. It is slow, with a poor battery performance and a not great camera. There are better budget smartphones out there.