Netflix have announced a major update to pretty much all of their TV apps – bringing new visuals and details, as well as improved recommendations and device-specific functionality. 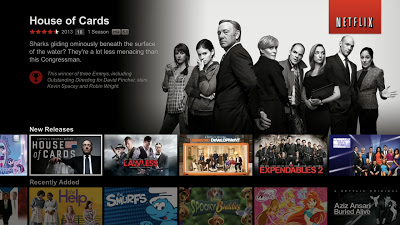 The first thing you’ll notice in the update is the improved visuals. More space on the screen has been devoted to descriptions, and it will also display relevant graphics rather than just the “DVD cover” image. If you want to browse to a specific episode of a TV show, then there’s now full screen listings – with specific relevant imagery for each episode. There’s also updates to the “post-play” screen that appears when the credits roll and have further viewing recommendations. Nothing revolutionary – but certainly a nice addition.

Perhaps more crucial is the roll-out in support for Netflix profiles across all devices – so that different members of the family can watch whatever they want on their tablet, but then continue on watching on the TV. There’s also support across all of the updated platforms for the kids-specific section, which was previously only available in a couple of places. Again – great for families.

Recommendations have also improved – apparently it will explain why a certain title is being recommended to you – whether it’s because you watched certain other films, or because your Facebook friend watched it, and so on.

Interesting too is the device-specific upgrades. Kinect owners will be pleased to hear that the Xbox 360 app will now support voice commands – and there’s also support for “pointers”, on the various smart TVs that support them.

The update will be coming to Xbox 360, PS3, PS4, Roku 3, and “new and future” Blu-Ray Players and Smart TVs. Apparently an update for Roku 2 will also receive an update early next year.