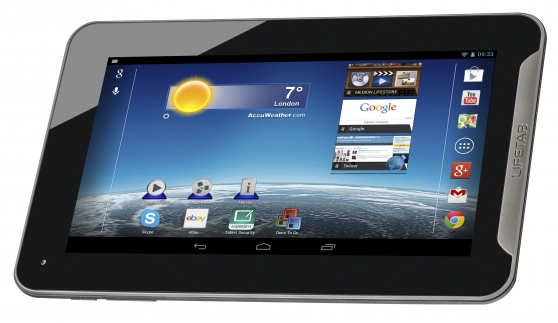 In the market for a cheap-ish Android tablet? Well now you have another model to add to your list. German maker Medion has just launched a £77 7″ Android 4.1 Jelly Bean tablet – the MEDION LIFETAB E7310 – which is going on sale at Asda.

Specs are pretty much what you’d expect, solid but rather basic, It weighs 305g, is equipped with a dual-core processor, Wi-Fi, Bluetooth and front and rear facing cameras. ring outstanding value for money.

Screen-wise the model has a multitouch display with 1024 x 600 pixels. Inside is features an ARM Cortex A9 1.4 GHz dual-core processor, 8GB internal memory (which can be expanded by up to 64 GB using a microSD, microSDHC or microSDXC memory card) and a USB 2.0 connection

It features 2 MP camera on the rear and a 0.3 MP front camera.and comes with a range of apps built in including ‘Documents to Go’ and the creative application ‘Drawing Pad’