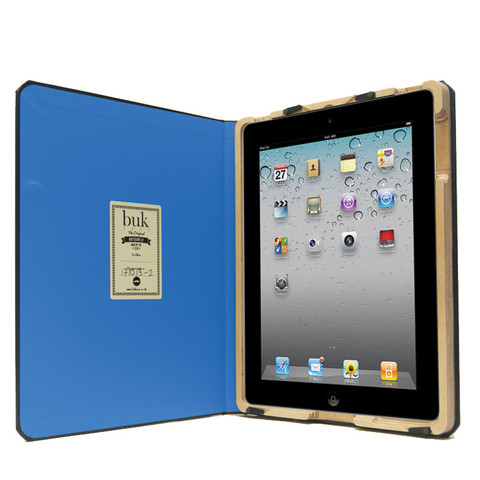 If you’re a fan of Dragon’s Den, then you may remember a certain product called the ‘BUKCase’, a bespoke tablet case, designed and built in the United Kingdom! And I’ve been lucky enough to get my hands on one for my beloved Apple iPad 4.

The case has been created to specifically replicate an old-fashioned book, undisguisable if you were to hide it away on an ordinary book shelf. And I literally mean that – it can actually confuse people! I’ve been using my iPad in the case, and people have come up to me and asked, “what book are you reading there, kind sir?” – I’m not at all lying. Trust me on that. But in all fairness, it does add a lot of quirkiness to the concept of protecting your tablet PC.

But before I actually talk more about the case in terms of its overall appearance and the materials used that make it so luxurious to own, I have to commend the team behind the packaging, because the feeling of quality is right there before you actually have the case in your hand. I was especially impressed with the cute pamphlets that you also get.

The case itself is made from high-quality leather, built in the same way that you would manufacture a book. However, as a nice as it might feel, not everyone is going to agree with the fact that it adds a lot of bulk to the tablet. For me, this isn’t a huge problem, but there are quite a lot of fussy people out there, if you know what I mean. But more on a positive note, it’s also great to see the added extra of the smart cover function. I found it very useful.

In all honesty, the BUKCase isn’t complicated at all to get the tablet into, but I wasn’t really a fan of the fact that you need to use four fiddly pieces of plastic to keep the tablet in place. I’m not really sure if there’s any other ways around this, but it’s something I find annoying.

Again, trying to be as positive as I can here, I think it’s great that you get a piece of elastic to firmly close the case. It’s something that adds a bit of character when you’re using the case.

The BUKCase speaks for quirky and creative people alike, offering up a great overall package for the price that you pay for it. Not only does it look and feel good, but it’s actually a very practical idea that just goes to show how quirkiness deserves merit. I really do like it.