Everyone knows that Amazon are the current kings of ebooks, and it’s easy to see why – they’ve developed an expansive eco-system of millions of available books, along with some great devices to read them on. But there is a problem: Amazon aren’t the most… ethical company, right? They don’t pay their taxes, and have been accused of using their clout to bully an already struggling publishing industry. So what if you want to read without the hassle of paper – but don’t want to give them your cash? Kobo has long been the nearest competitor – and with the release of the Kobo Arc 10HD, we see them challenge Amazon’s big beast, the Kindle Fire HDX 8.9″ directly. But how does it stack up? 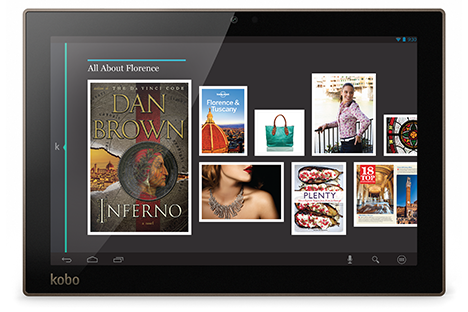 The Arc 10HD has a large 10″ screen – and it’s oriented to be essentially super widescreen – in a 16:10 ratio (normal widescreen TV is 16:9). It works either as a portrait or landscape device – but given the placing of the camera and the fact you’re supposed to use it to read books, it’s clearly designed mostly for landscape usage. The screen itself runs at a comparatively massive 2560×1600 with 300ppi – and can play back 1080p HD videos as a result. The only bad thing about the screen – and maybe I’m just mad in thinking this – is that it seems a little… not quite as bright as the Macbook I am writing this on, even when the brightness control is maxed out. Though your eyes will quickly adjust to this.

There’s a touchscreen that can take up to ten fingers at once, and under the hood it’s towards the top-end of Android tablets: A 1.8ghz quad-core Tegra processor, with 2GB of RAM and with 16GB of on-board storage.

Connectivity looks good too: There’s wifi (with 2×2 MIMO!), bluetooth 4.0, as well as mini HDMI out (for plugging into your TV) and a Micro USB socket (for charging it up). Kobo claim to be able to get 9.5 hours of battery life out of it if you’re continuously reading – with the wifi off.

But what does it feel like? I found it surprisingly weighty – not to the point of struggling… but it simply feels heavier than it looks. Similarly it’s slightly thicker than you might expect – at 9.9mm. Not that this is unbearable – I don’t want to accidentally start a thing where we criticise tablets that aren’t “size zero”. It feels solid to use – though there isn’t really much to say. It’s a black rectangle with a screen on it – what do you expect?!

What you’ll notice when you first switch on the Kobo is the Kobo app/store that sits on the tablet’s desktop, as one of the screens. Once you’re logged in with your Kobo account you can scroll through a list of your books and magazines (they’re arranged like a Pinterest page).

Magazines are handled a bit like big PDFs – each page is essentially a large image file – so it’s much easier to read in portrait mode than landscape.

Books meanwhile are handled as text – so you can choose to read in either mode – you can even have two columns of words displayed side by side (just like a book!). Scrolling through is nice and quick – though page transitions are by default animated with a modern swish rather than an old-fashioned page-turn. You can change this in settings though – along with choose to turn pages using the physical volume buttons on the side of the device… which is great if you’re a lazy reader.

What’s quite cool is that Kobo have augmented the reading experience and made it social. Like Amazon have done with Kindle, it’s possible to highlight bits of text and write notes and share to Facebook – but where Kobo seems to have the edge is that you can also apply different coloured highlighting, which is great if you’re studying a book.

Similarly – if you see a pink speech bubble subtly appear at the side of a page, you can read comments from other readers. What’s also impressive is that some books have loads of extra details – touch the diamond icon at the bottom or press on the underlined text and it’ll give you a guide to different historical references and the like – citing Wikipedia. On one example I found, on a reference in a novel to “Margaret of Anjou”, it even recommended other books about her.

Perhaps the best feature though is Reading Mode. The trouble with reading on a tablet, as opposed to a dead tree is that there are just so many distractions. Why would I want to read a book old book when I can rot my mind checking those Facebook notifications or taking my turn on Scrabble? Reading mode gets rid of all of that by switching off wifi, bluetooth, notifications and everything else that could possibly take you out of Hogwarts/Nania/Derrida’s brain. This can be triggered either automatically when you go to read a book, or manually with a simple swipe down of the menu at the top of the screen.

Finally, a note on the Kobo store. Whilst Amazon have always had the largest catalogue of ebooks to download, unless you’re after something really obscure, it probably won’t affect you. I tried searching the Kobo store for all of my most recent Kindle purchases – and it had everything apart from this, which let’s face it, is so obscure if it were made 10 years ago it’d be made from photocopies stapled together and sold at a carboot sale.

The Kobo runs Android 4.2 Jellybean – and thanks to the powerful processor runs it nice and smoothly. Apart from the Kobo-specific software, it seems to let the rest of the tablet run regular Android unimpeded – so your apps still come from Google Play, and there’s still a tight integration with Google services. You can even buy books from Google’s store, if you like.

I tried giving the tablet a bit of a stress-test by downloading some of the flashiest Android games to the device. It seems to cope absolutely fine with everything I’ve tried – including the latest FIFA. But you’re going to use this for reading clever books, not wasting time on games, right?

So is the Kobo Arc 10HD a good purchase? It certainly could be. At £300 it’s at least £100 cheaper than an iPad, and you’ll still get a powerful 10″ Android tablet, even before you consider reading anything on it.

My only reservation is something that technology can’t really solve. And that’s the test of whether you’d get it out on the night bus. I’ve got a 7″ e-ink Kindle, which whilst a cool gadget isn’t particularly attractive to teenage muggers because all I can do on it is read books – I’d feel much more of a target pulling a massive 10″ glowing screen out of my bag. But this is just me being paranoid.

On the merits of the tablet itself, the Kobo is a great device – and a cracking alternative to the Kindle. You won’t be disappointed with the Kobo.