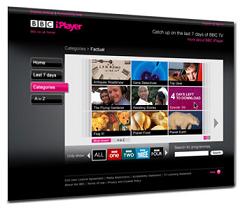 Some seismic news from the BBC this morning. It has unveiled plans to develop its online iPlayer service taking it from broadcast TV catch-up to what the corporation says will be the BBC’s primary digital entertainment destination.

In what might be seen one day as watershed moment for the BBC is said that the revamped iPlayer will offer a greater range of content new ways of watching BBC shows and host of innovative new features.

Among the new plans are pop up channels which may be curated by high profile individuals. The BBC says that these will focus on key events like Glastonbury. There will also be online TV channels of its existing brands such as Radio One TV as well new channels for arts and science. The BBc has also committed to sharing more exclusive content online which it says builds on the success of the comedy pilots it has recently created for BBC Three.

The platform is also going to get a serious overhaul with the main news being that the windows to watch programmes is to be extended from seven to 30 days, The corporation is also adding the ability to pause and resume TV viewing from one screen to another and promise more relevant and personalised recommendations. Also the BBC iPlayer will also introduce the ability to create personalised channels based on your preferences.

Here’s what the BBC execs had to say…

BBC Director-General, Tony Hall, says: “The new generation of BBC iPlayer is set to transform our relationship with audiences. In the coming years, for many people BBC iPlayer is going to be the front door to our programming and the experience they have is going to be a world away from that of a traditional ‘one to many’ broadcaster.

“It will be a relationship where we provide our audiences with what they want, when and how they want it. And crucially through enhanced interactivity, they will also be able to tell us what they think of these programmes and services too. That conversation excites me hugely as it means our audiences won’t just receive the programmes we make, they will contribute to how we make them as well.”

Ralph Rivera, Director of BBC Future Media, says: “BBC iPlayer is one of the BBC’s greatest inventions and one of the UK’s favourite brands. We plan to revolutionise iPlayer from a service primarily used to catch up on BBC TV to an entertainment destination for all – wherever you are. With innovative interactive features and a new design that helps you discover more hidden gems from the BBC, iPlayer will transform online TV for audiences now and in the future.”

Danny Cohen, Director of BBC Television, says: “From new programming exclusive to BBC iPlayer, to new online and pop-up channels around special interests or major events, BBC iPlayer will be bursting with more content than ever. We want to allow viewers to make the choices about what they watch and when. Over time, more and more of our programmes will be available to watch on BBC iPlayer before they are broadcast on TV, allowing viewers to create their own evening schedule. And, programmes will be available for longer – increasing the catch-up window from seven to 30 days. All this will make BBC iPlayer the ultimate destination for TV fans for years to come.”