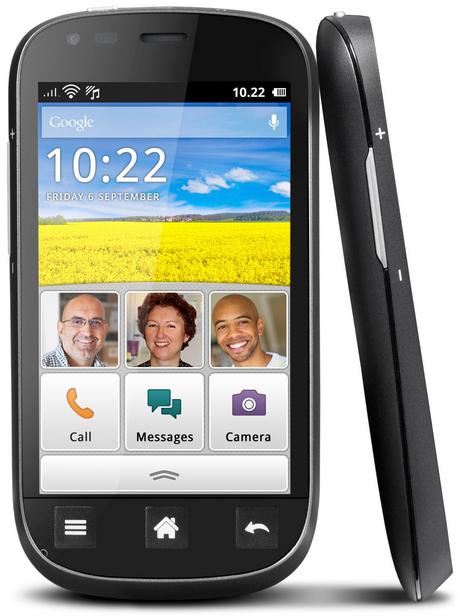 Doro, the Swedish company that makes simple to use mobile phones is back with a new model. The Doro Liberto 810 keeps the company’s trademark ultra accessible interface – the – but wraps it around an Android 4.1 based smartphone. I guess the theory is that you can work out how to do the basics from day one and then maybe explore more of your handset as time goes by.

It is also light and comes with a soft touch casing. The company believes that the simple to follow icons and trio of prominent physical keys on the handset shouldn’t fox anyone.

The phone also incorporates the predictive text on steroids system Swiftkey and comes with a specially curated selection of apps from the Google Play store.

Chris Millington, Managing Director of Doro UK and Ireland says: “The name Liberto was specifically chosen for our new smartphone as it sums up the essence of the device perfectly. In ancient Rome, servants and slaves of the empire could earn their full citizenship to become fully contributing members of society. Such people were known collectively as ‘the Liberto’. This new mobile helps people, who might be hesitant about using a smartphone, to fully embrace modern society. We are liberating those who perceive smartphones to be overly complicated and crowded with difficult-to-use apps. Our new mobile will bring them into a world of technology in a positive and engaged way.

It will be available in the UK next month.