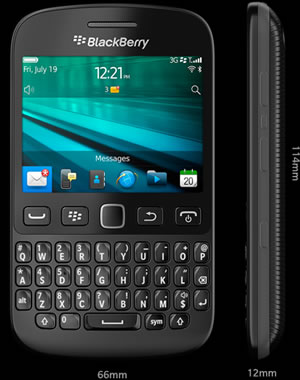 It has been a weird few days for BlackBerry with the Canadian phone maker announcing yesterday that it is looking for a buyer.

Yet today it seemed as if nothing had changed for the maker took the wraps off its 9720 smartphone.

It is an old school handset in that it runs the company’s established Blackberry 7.1 mobile operating system (OS) rather than the Blackberry OS10 found on more recent handsets like the Z10. I guess this will help keep costs down, which is imperative for the brand to continue doing brisk business in emerging markets.

The phone features Blackberry’s traditional physical QWERTY and a dedicated BBM key, there’s a small-ish 2.7in 480×360 touchscreen, a single-core 806MHz processor and 512MB of RAM.

It comes with 512MB of internal storage expandable via microSD card, a 1,450mAh battery and a 5MP rear-facing camera. You can have it in black, white, blue, purple and pink.

It will debut in the next few weeks in Europe and other parts of the globe and our guess is that will retail for around £200.

One thought on “BlackBerry announces 9720 smartphone”