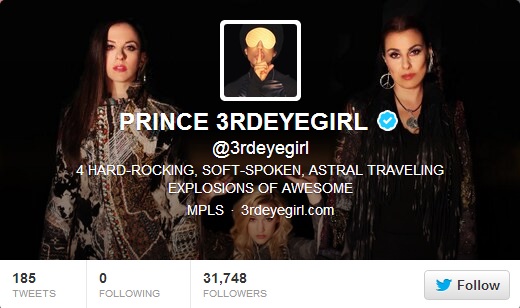 Now here’s one person you wouldn’t expect to see on Twitter, yep Prince the squiggled one of yore who has in the past railed against the web even telling the Daily Mirror back in 2010 that he thought the Internet was over. He has also apparently intended to file lawsuits against eBay, YouTube and the Pirate Bay for the misuse of his music.

Anyhow, it seems like the genius 80s popster has gone all social for he has launched a Twitter account at @3rdeyegirl, which appear to be his latest nom de plume as his new single, Groovy Potential, appears on the 3rd Eye Girl YouTube account.

His tweets have been just as baffling too.

He started off with a vintage image of himself and the words “hi im prince”. A few hours later he included a photograph of a salad accompanied by the words “DID EYE ADD 2 MUCH PEPPER?”

He seems to be generous with his retweets too. So if you want Prince to share your thoughts with the rest of the globe now is the time.

At the time of writing he has around 32,000 followers.