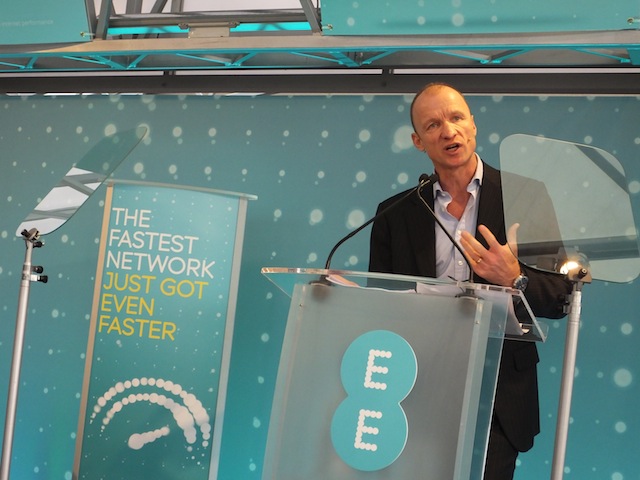 In a major revamp of its 4G strategy EE has today announced that it is doubling the speeds of its 4G network. It has also become the first UK network to offer pay as you go 4G tariffs.

The new speeds will go live in 12 cities tomorrow bringing EE’s average 4G network to between 24 to 30mbps, reaching maximum speeds of up to 150mbps. That’s twice as fast as before. The upgrade will be available in Birmingham, Bristol, Glasgow, Liverpool, Manchester, London and other places and is free to both new and existing 4G customers.

Also in a surprise, and in some ways innovative move EE is allowing customers to share their 4G contracts between family members and devices.

Basically a “lead sharer” holds the main contract, with extra users added to the plan for between £5 and £22 a month (costing more depending on whether they’re looking to add a phone with calls to the plan, and less for simply piggybacking the data for a tablet or laptop), to a maximum of five sharers, splitting the overall cost of the bill.

The sharers choose a device that they wish to attach to the plan, and ioptmise their account by choosing an add-on bonus that includes access to music streaming and gaming offerings.

Shared contracts start at £31 a month for 500MB of data and unlimited calls and texts, and rise to £51 for 5GB of data. All are 24 month contracts.

EE will also be introducing pay as you go 4G mobile broadband data plans, allowing customers to tap into the network’s high data speeds without having to add on unnecessary text and call minutes. PAYG plans are as follows:

PAYG 4G Dongle (plug in to compatible devices):
Alcatel L800 USB Dongle – £50, complete with 2GB worth of pre-loaded
data for 30 days. At launch you can get 6GB for the same price as 2GB.

PAYG Mobile Wi-Fi Device:
Alcatel Y800 Mobile – £70, complete with 2GB worth of pre-loaded
data for 30 days. At launch you can get 6GB for the same price as 2GB.

A new partnership with Mastercard called Cash On Tap is also being introduced by EE handsets, NFC-enabled handsets to make contactless payments of up to £20 in 230,000 UK stores. Rather than coming pre-installed on EE handsets, it’s an optional download from the Google Play Store.

“When we launched 4G we talked about a vision of building the best network and best service so that our customers trust us with their digital lives. Through our launch and through the past eight months, we’ve already realised that aim.”