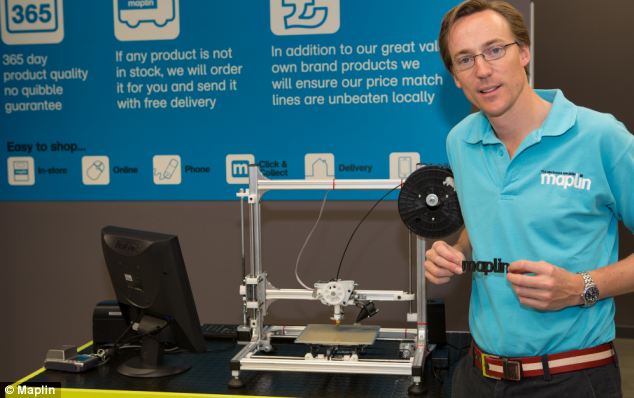 Yesterday High Street Electronics store Maplin announced some pretty significant news. It confirmed it was going to become the first retailer to sell a 3D printer in the UK from its stores. Up until now they have been available but via the web.

It is offering the Velleman K8200 for just £700, which is way cheaper than any of its rivals.

So it sounds great, but what exactly are you going to use it for?

Well first up, here’s a quick resume on how it work? First you you have to use PC software to design what you are going to print. You then send this data to the printer which then builds up the layers in plastic.

After a while the printing is completed and you have your object. It can produce basic things in less than 30 minutes. More complex stuff can take hours.

Maplin is selling the printer with five metres of polylactic acid (PLA) — the 3mm plastic wire which is used to create the objects.

Ok, so what can you make? Well the headline story has always been about engineering a gun and there are examples of how this has worked, and how it has gone horribly wrong.

You can create mobile phone covers, ornaments and more, but I suspect that it will get most of its use creating jewelry or fashion items. Some of the more complex things that have been created on professional 3D printers such as a violin, weird shoes and more are way beyond low-end models like this for a number of reasons. One of the main obstacles being that printing complex objects can take days to complete, another is that 3D printers require a deal of technical knowledge to be operated. It isn’t just plug and play and out pops an item.

There are other downsides though. Firstly Maplin is now showing a 30 day wait for the product. Secondly the printer is a self assembly model so it will take the user a while to put it together.

Nevertheless the arrival of a 3D printer in a UK store is the start of a journey – who knows where it will lead.

Still maybe one day you will be able to use a 3D printer to create another 3D printer – now that would be progess.