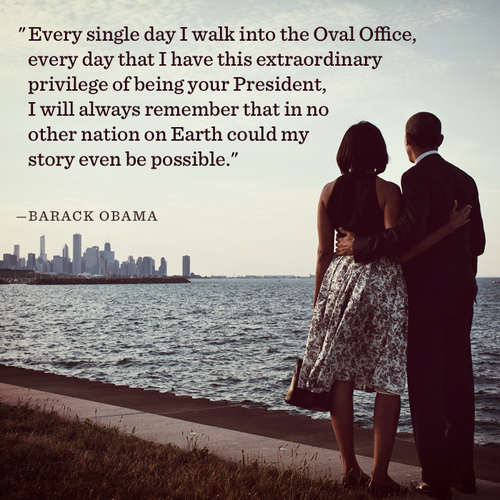 While looking for an image for a Tumblr story I stumbled across this recent image from Obama’s blog.

For me it totally encapsulates the differences between the UK and the US in the way we see the world, but especially how we see politicians.

The image has Obama and Michelle looking lovingly towards some US City – I guess it is Chicago – and is accompanied by words that may be especially written for the post, or might have come from one of Obama’s speeches.

I can’t speak for Americans, but I guess for those of the more liberal persuasion the image personifies the American Dream. No matter who you are or what you are you can make it in this country. And this is only country in the world where this could happen.
The image is clearly designed to work the emotions too and it has clearly been Instagrammed to the max with soft filters to underscore that homely and earnest message.

Now just imagine that it is not Obama, but David Cameron with Sam gazing across the dreaming spires towards the River Cherwell saying the same thing. It would be widely lampooned by everyone not just from the left but from within his own party too.

Ok, so take a closer analogy – Margaret Thatcher. Her achievement in becoming the first woman to head up a major Western government was every bit as ground-breaking and impressive as Obama in the prejudice that she had to battle with to get to the top.

So Maggie and Dennis looking out from Alfred Roberts’ grocers in Grantham across the green fields of Lincolnshire with the same words? Again, it would be utterly bizarre.

Ok, so swap Cameron/Thatcher for a possible future Labour leader Chuka Umunna (he hates being compared to Obama but there are some clear parallels that go way beyond the colour of his skin) gazing from south of the river towards the Houses of Parliament. The image posted on his Tumblr blog.

Pass the sick bucket. Even those who think Ummuna could be the next British PM (and I would love to see him with the keys to number ten) would be sniggering.

Umunna has plenty to deal with anyhow from the Tories.

Are any UK politicians on Tumblr anyhow? I couldn’t find any.

For me the image says less about the Great American Dream, but more about the lack of deference Britons have for our politicians. One one hand it is that optimism and positivity that has helped create the US, an amazing success story. On the other hand though, maybe those of us who stayed in the old world are less susceptible to politicians pulling on our heart strings.