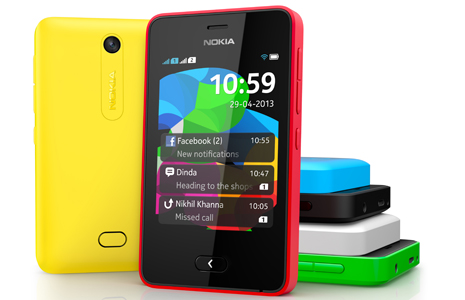 So you want a cheap, but reliable phone and don’t give a monkeys about big screens or fancy operating systems. Well Nokia is once again coming to your aid. The company seems intent on cornering this low-end, old school market with its Asha range of phones. And it has announced a new one today the Asha 501.

In theory these handsets are largely aimed at developing markets, where Nokia is doing well, but looking at the specs and the design I do think then might have a cult hit on their hands with these phones in the UK and elsewhere in Europe. This phone, which has the freebie messaging service WhatsApp built in, is already causing a buzz.

Back to the 501. Nokia is billing it as an affordable smartphone in that it is first to run on the new Asha platform which has been optimised for this type of phone. Just like Android and iOS users can create apps for Asha, so hopefully you will see a lot of your favourite apps landing very soon.

On to the phone then. It has a three inch touch screen, comes in a choice of six striking colours and features two parts – a removable casing and the scratch-resistant glass display.

It is light – it weighs only 91 grams, has amazing battery life (Nokia claims that it runs for 48 hours on standdy) has on board Wi-Fi and packs a 3.2 mega pixel camera.

Nokia says they have also kept the interface simple with the user offered the choice of two main screens: ‘home’ and Fastlane. Home is a traditional, icon-based view for launching individual apps or accessing a specific feature, like the dialler or phone settings. The new Fastlane view sports recently accessed contacts, social networks and apps.

The phone also comes with Nokia Xpress browser which the maker says compresses Internet data by up to 90% to make mobile browsing faster and more affordable.

Lastly the phone is going to be cheap. It will sell for $99 and that’s before any network subsidies.