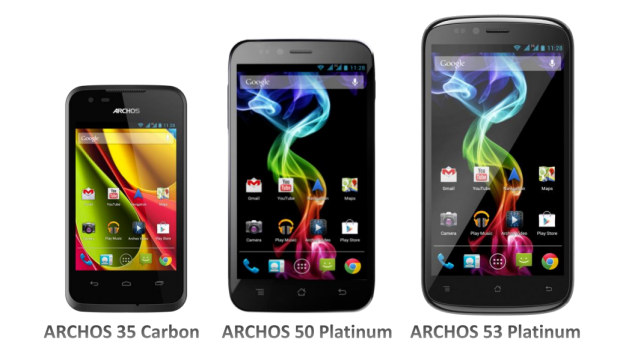 Archos’ much talked about move into mobile phones was finally confirmed today with the French maker unveiling a trio of handsets including a pair of Phablets.

The trio are all due in the stores at the end of May, though we have no details yet on whether any UK networks will offer deals on them.

The most interesting is the 5.3 inch screen Archos 53 Platinum, which also has a 1.2GHz quad-core processor, 1GB RAM, 4GB storage, an 8-megapixel camera and runs Android 4.1.2 Jelly Bean.

There’s a five inch screen version – the Archos 50 Platinum – which has similar specification but a smaller battery and the Archos 35 Carbon, which has a 3.5-inch screen, Android Ice Cream Sandwich, VGA cameras and 512MB RAM.

“The smartphone market is shifting, as SIM-free sales versus subsidised sales are increasing. ARCHOS is prepared to respond to this change, as we can offer retail channels affordable, unlocked and feature-rich smartphones without the heavy price tag,” says Loïc Poirier, CEO of ARCHOS. “Furthermore, smartphones and tablets are interrelated markets that have quickly crossed over with the arrival of “phablets” – half-phone, half-tablet devices. It makes sense that this should be our next phase of products as it’s a natural fit for our brand and long term growth plans.”