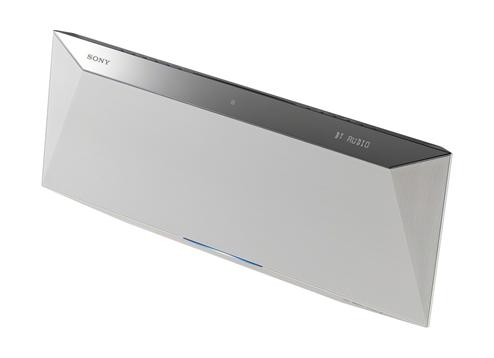 Sony has just released details of a new wireless audio system – the BT80WB – that connects with a smartphone or tablet and can stream music via Wi-Fi or Bluetooth.

The speaker also comes with one-touch NFC connection for pairing and listening with your smartphone or tablet, sports Magnetic Fluid Speakers and included a S-Master Amplifier.

There’s also a second version – the CMT-BT60B – which doesn’t connect wirelessly using Wi-Fi but still has the Bluetooth and NFC options.

The pair also have a USB connection for direct hook-ups for playback (CMT-BT80WB) and charging the battery (CMT-BT60B) of your iPad, iPhone or iPod.

Output is 40W RMS output on both models, with the S-Master Amplifier offering an equaliser, Bass Booster and Sony’s Digital Sound Enhancement Engine. They both include an integrated CD player and DAB and FM radio tuners.

They will go on sale in May. The 80 is grey with the 60 finished in black.