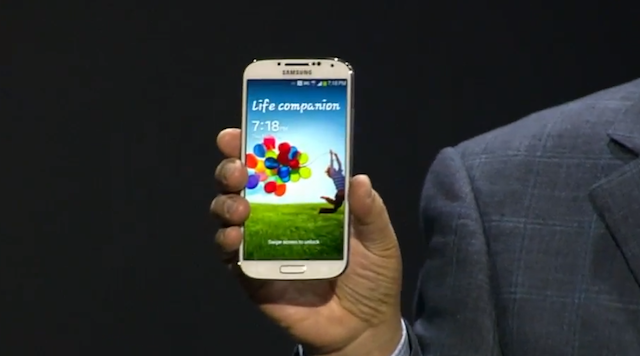 So here we go with the basic information

Screen size and resolution – 5inches – that’s a tad larger than the 4.8inch display on the S3. It will have resolution of 1920×1080 – or around 441 pixels per inch (PPI) – that’s more than the resolution of Apple’s Retina display technology.

Design – The phone is available in black and white Polycarbonate. It is similar to the S3 though the casing has been squared off a little. It is made from plastic (probably to keep the price down)n rather than the more aluminium feel of the Apple iPhone 5. It is only 7.9mm.

4G – EE pretty much confirmed that the phone was going to be 4G a few days ago. Anyway yes it will run on EE’s 4G network and any other UK 4G networks that will launch soon.

Features – The S4 is the first Samsung phone to offer wireless charging. It also has Infra red conbtrol, so you can contol your TV.

There’s a feature called S-Translator that can translate languages automatically. You type words out in English and it then speaks them in one of nine languages. Or it can translate words on a menu etc through its reader.

Adapt Display – with this the screen automatically adjusts to what you are using the screen for and where you are so it is more comfortable to your eyes.

The S4’s touch screen can also be controlled when using gloves.

The S4 also has Group Play – which you can use shared music feature to play music on up to eight devices simultaneously.

Video Calling has been enhanced so it now works with up to three people – or you can have a video call but show an image.

S-Health is a suite of health and fitness related features. It will tell you how many calories you are burning, gague your heart rate and sleeping patterns. You can also monitor your blood sugar levels with an add on.

Smart Scroll web-page eye-tracking and Smart Pause media pausing are also included, with the front facing camera following your eye movements and angle of the handset in your hand to pan pages automatically, or pause videos if you look away from the screen.

Camera – The S4 sports a 13 mega pixel camera. A step up from the eight mega pixel one on the S3. It also includes a dual camera record feature. So you can shoot video from both the front and rear cameras at the same time, enabling you to be in the picture if you are taking the image. It also works for photos too. You can also add voice to an image as it can capture a few seconds of audio.

The S4 also has a feature called Drama Shot that can snap 100 images in four seconds. Another feature is the Story Album that automatically gives you an option of creating a Story Album which brings together pics from the same place together – ie all your holiday snaps.

Battery – This is another step up from the S3. The phone will sport a 2600mAh battery which is 500mAh bigger than the battery in the S3. It will need it to run the brighter screen and 4G.