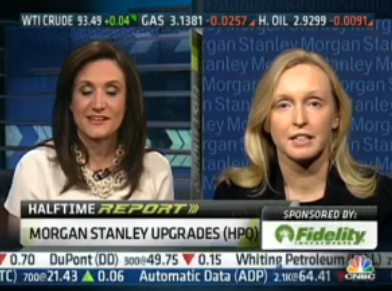 If you are an Apple fanperson who is starting to worry that your smartphone might not be the coolest mobile on the planet any more. Fret not. According to Morgan Stanley analyst Katy Huberty, the next iPhone – the 5S – will include a killer feature that will shut your Android-touting mates up. Well for while anyhow.

Huberty spoke of the feature on a programme on CNBC, reported here, where she defended her positive remarks about Apple – which is odd given the way the share price has been taking recently.

“I do believe that Apple is approaching a bottom. As you have heard, they are talking about returning more cash, and we think they will do that in coming weeks. But people don’t own Apple for that, they own Apple for innovation. You saw the Samsung Galaxy S4 come out last week, that shows you the innovation cards are up for grabs. What is lacking in that product [the S4] is a killer feature. We think that’s where Apple will surprise this year. This [iPhone] 5S cycle this year will be about a killer feature that drives consumers increasingly to the platform, and that increases the value of those 500 million accounts.’

So what might that killer feature be – a free iWatch that comes with the phone? A new way way of controlling the handset? Fitness and health features built in? Well Huberty, is not saying anything for now.