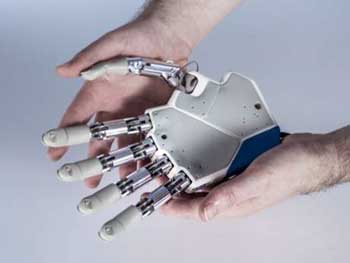 Scientists are currently working on a new kind of bionic hand, which will allow amputees to actually feel what they’re touching, according to The Independent.

The pioneering technology will be implanted into an unnamed man later this year and could prove to be the next step in the advancement of artificial limbs, which will obviously have a huge impact on the lives of amputees and their overall sensory perception of the world around them.

The hand will work by being connected up to the patient’s central nervous system via electrodes, which will then (well, hopefully then) mean he’ll be able to control the way the hand moves, as well as being able to feel tough signals from sensors in the prosthetic limb.

It may seem like the plot from a sci-fi movie, but once in place, the man should be able to control everything the hand does using solely his thoughts, creating a fast, two-way flow of information between his nervous system and the new, bionic hand.

Dr Micera, the man heading up the research, told the American Association for the Advancement of Science meeting in Boston:

“This is real progress, real hope for amputees. It will be the first prosthetic that will provide real-time sensory feedback for grasping.

“It is clear that the more sensory feeling an amputee has, the more likely you will get full acceptance of that limb.

“We could be on the cusp of providing new and more effective clinical solutions to amputees in the next year.”

An earlier prototype of the same hand was attached to Pierpaolo Petruzziello back in 2009 and he could clench the fingers and hold objects, as well as feel needles that had been pricked into the skin. However, the newest version will be fitted up with even more sensors than before.