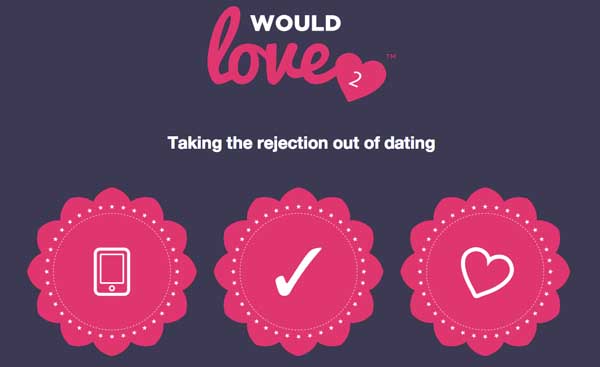 Last week we were all exposed to the horror that was Bang With Friends, a Facebook app thing that hooked you up with mates that you want to “bang”, who also want to “bang” you, because apparently the world of the internet isn’t gross and sleazy enough and some people find it really hard to get laid. Well hot on the heels of that rather worrying Facebook sex app comes Would Love 2, which works on the same principle, but makes it sound like it’s linking people up to go on nice dates rather than casual sex sessions.

Would Love 2 is an iOS app that allows you to scroll through your Facebook friends and select which you’d be happy to “date”. These contacts are then saved in your “locker” and kept completely private, unless someone you’ve selected happens to select you too… then DING DING DING, the app will alert you both to the match and allow you to take it from there.

Although Would Love 2 could be used in much the same sleazy way as Bang With Friends, the premise is at least a little different, with the former being solely about… Well… BANGING and “finding friends who are down for the night” and the latter being focused more on “taking the rejection out of dating”. Whether it’s used to help lonely people find their soulmates remains to be seen, but at least it seems just a little less scumbag-y than Bang With Friends… Maybe.