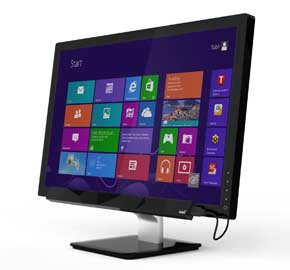 Back in December 2011 the Shiny Shiny and Tech Digest teams went along to a special preview of the world’s first eye-controlled arcade game, called Eye Asteroids developed by Tobii.

Over the past few years the specialists at Tobii have been developing all kinds of new ways to integrate their eye tracking technology into our everyday lives and according to news this week it’s set to be taken from arcade game concepts to our own computers at CES 2013 next week.

Mashable reports that Tobii is set to show off its latest eye tracking product called REX, which is simply a device that attaches to a monitor, plugs into your computer or laptop via USB and then works alongside software called Tobii Gaze to track your eyes and allow you to drag things around the screen or play games with only your eyes.

It seems that only a select number of Tobii Rex devices will be made and there’s no official word about how much the whole package will cost. However, you can sign up via Tobii’s website now to receive a special VIP invite 48 hours before its official release later in the year.