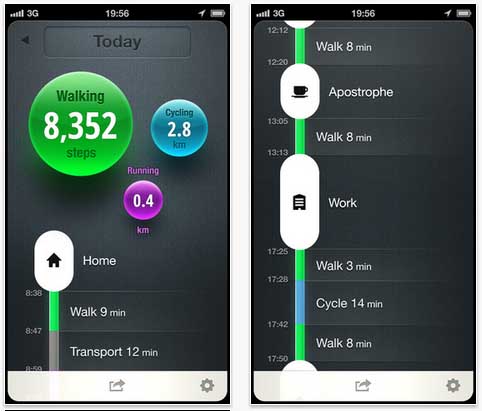 Fitness tracking apps and gadgets have been all the rage over the past year or so, with brands from Nike to BodyMedia to Jawbone to Fitbit launching devices that keep an eye on everything you’ve been up to over the course of the day. However, there are plenty of apps that promise to do a similar thing with less of the hassle and we think Moves might be set to lead the pack.

The app is solely for iPhone users right now and makes use of the smart phone’s accelerometer to record all running, walking and cycling activity that you do. It’s smart (and different to many other devices on the market) because it doesn’t need you to tell it what kind of exercise you’re doing or tell it when you’ve stopped or started, it’s able to tell straight away all by itself, which makes for much more accurate tracking.

Not only does Moves track your activity levels a little differently, but it presents the data in a much more intuitive way as well. It’ll automatically create what the team call a ‘storyline’ of your life, which includes your activity throughout the day at specific times, along with a heat map kind of system to show how hard you were working and even your locations as well. It’s this storyline feature which is what really excites us about Moves, because it makes it so easy for users to see what they’ve been up to, so they’re more likely to change for the better. Don’t get us wrong, we love gadgets like Fitbit’s Zip, but to be able to see such a simple indication of what you’ve been doing like this makes us want to track everything because it’s just so damn easy!

In its offensive against tracking gadgets, the Moves team has handily created a chart for its website that shows just what a great option it is in comparison (of course they would say that), which is certainly worth checking out if you’re considering ditching your wearable devices.