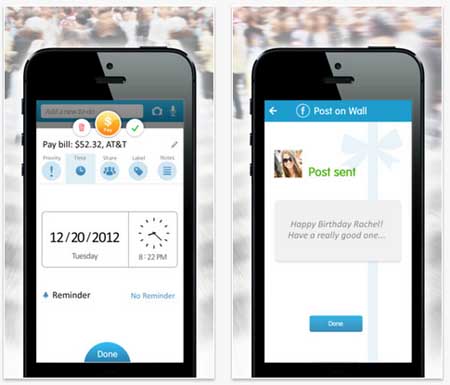 Since its launch early last year Clear has been our favourite to-do list application because it’s so simple to use and looks bloody good too. However, all that could change now we’ve got our hands on 24me, an app that’s admittedly a little harder to get your head around than Clear, but is able to track your job list and remind you about birthdays all from one dashboard.

As you’d expect, reminders and job lists are central to how the app works and are just as easy to add as those in Clear. You can then assign tasks to “today”, “tomorrow”, “rest of the week” and “later”, which seems weird at first if you’re used to working to a more rigid schedule, but does save time in the long run. You can add all kinds of things, like levels of priority, additional notes and due dates as well. For those who have gotten used to Siri, you can also use your voice to control how 24me works, because Nuance’s speech recognition software is integrated into the app itself. 24me also syncs up to your Facebook account so birthdays are automatically added to your schedule too.

The app’s even better if you’re living in the US and Canada, because you can access “My Financials” and keep an eye on your ingoings and outgoings, but unfortunately that feature hasn’t made its way across the pond quite yet.

According to The Next Web the app has been around since late last year, but its slew of new functionality updates means it’s more useful than ever.

The key to using apps that are designed to make you more productive and awesome at life is finding one that really suits you, whether it’s feeling like it’s got really intuitive controls or just preferring the colour scheme to any others, the more you like using it, the more likely you are to be able to integrated it into your daily activities. We’re not sure whether we’ll be trading Clear in for 24me anytime soon, but for simple task management it’s certainly a worthy competitor.

24me is available from iTunes for free.