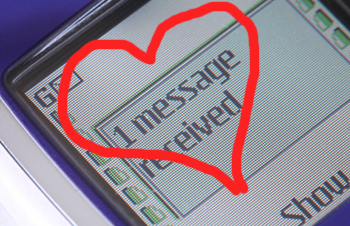 Happy birthday texting, you’re 20 today and wow have you served me well over the past few decades. I really don’t know how I’d have got through my awkward teenage years without you and the thought of talking to boys via the medium of speech and not short text-based messages with an abundance of emoticons still fills me with dread :(:(:(.

To think that a mere 20 years ago today, on the 3rd December 1992, you were brought kicking and screaming into the world when 22-year-old British engineer Neil Papworth sent “Merry Christmas” to an Orbitel 901 mobile phone. From then on your condensed text speak language has defined a generation. We’re welling up at the thought of it.

But it’s not like you’ve fallen into decline or lost a lot of friends, as of 2011 more than 150 billion text messages are sent in the UK alone each year, which has tripled since 2006’s 51 billion messages. That’s an average of roughly 50 text messages per week, per mobile phone user. We just can’t get enough of you.

Your unique (and oh so loveable) way of communicating is now recognised as the most popular way of keeping in touch with friends and family, as Ofcom’s Communications Market Report for 2012 has revealed 90% of 16 to 24 year olds now text on a daily basis. By comparison, phone calls are far less popular among younger folk, with 67% making mobile phone calls on a daily basis, and only 63% meeting up for a regular face-to-face chat.

You win texting, you win every time in our hearts.

[Via The Telegraph and Tech Digest Image via Conversations by Nokia]