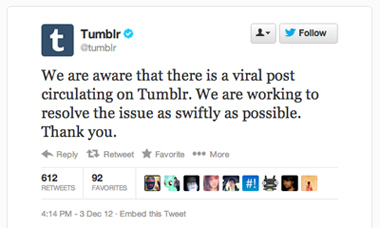 ERMAHGERD a nasty Tumblr worm has hijacked a number of Tumblr accounts over the past few hours, posting offensive content and stopping everyone from getting their daily fix of cat gifs.

A group that goes by the name GNAA (look up what it stands for, it’s offensive, NSFW and we don’t wanna write it out) has claimed responsibility for the attack, which posts an offensive video on the Tumblr blog in question and says stuff about the blogger commiting suicide. Oh. Charming.

Tumblr has admitted there’s been a breach and is advising anyone who’s visited a blog and seen any NSFW content to log out of all of their browsers and wait before they return. It seems like most of the problems have been resolved now, but keep your eyes peeled.