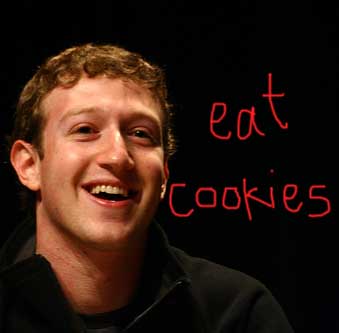 Facebook’s regularly blamed for everything, from making us thicker to breaking up marriages and relationship left, right and centre. But today a new study reveals that it could be making us fat and spend too much as well. Great news.

According to The Telegraph today, interacting with close friends on social networking sites raises your confidence, which then reduces the power of self control and makes you more likely to grab that chocolate bar or splurge on stuff you don’t need.

The research comes from a wider study from researchers at Columbia and Pittsburgh Universities, which aims to illustrate the significant effect social networking sites can have on society as a whole. The researchers carried out a series of tests and found that the raising of self esteem by chatting to friends appears to correlate with bad behaviour:

“Using online social networks can have a positive effect on self-esteem and well-being. However, these increased feelings of self-worth can have a detrimental effect on behaviour.

The research itself seems a bit far-fetched and it’s very different to past studies we’ve come across, which actually suggest that more time on social networks decreases our self esteem. However, the researchers are keen to point out that their studies are focused on “strong ties” with close friends and we’d still bet that interacting with people you don’t know so well and “stalking” photos can still make you feel a bit rubbish after a while, because you’ll start craving more meaningful interactions. But hey, at least you won’t be fat and blow all of your money that way.